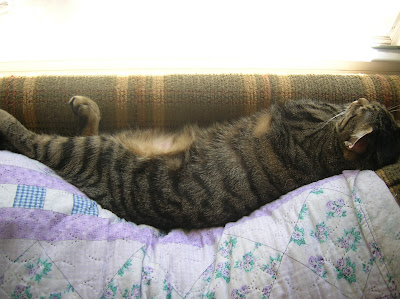 Posted by The Menagerie Mom at 8:27 AM 4 comments:

When Eddy's all tucked in for the night, she's always well guarded...
Posted by The Menagerie Mom at 9:26 AM 5 comments:

A Growing Family of Furballs

I apologize for my absence lately! As the title of the post hints, I've been a tad bit preoccupied with some furry additions to the family.

To begin with, my mom, just like myself, has a deep love for calico cats thanks to our beloved Rosie. Since Rosie's passing, my mom and I have both considered bringing home another calico, in honor of the wonderful years Rosie gave us. I myself have not yet brought another calico home, but my mother has! It all started when I went into a local pet store that has display cages for cats from a local cat rescue. Whenever I go to that store I always end up spending far more time oohing and awwing over the adoptable furbabies than actually shopping. Recently, I went in and my eye immediately spotted a roughly 4-month-old calico kitten with markings much like beautiful Rosie's, only dilute in color. In the cage with her was another adorable little girl, also dilute but with markings more like a tabby/tortie. Long story short, I told my mom about the adorable calico and her sister, and now the two little kitties are living at my parents' house!

After a family conference, the kittens were named Gemma (the calico) and Freya (the tabby/tortie). The local rescue they came from is known for trapping, taming, and adopting out stray cats, abandoned cats, and even feral cats. That being said, some of the kittens are not always all that used to humans, or have simply not yet learned full social skills and trust. That is mildly the case with Gemma and Freya. They are by no means aggressive kittens, but they are still a bit skittish and not terribly keen on being held for long periods of time. They love other cats, though, and that includes their new housemates, Talon and Trapper. What's more, Talon absolutely adores his little sisters and was the first to give them a tour of their new home! (Although Trapper did a bit of hissing and growling in the beginning, he tolerates the girls very well, even when they force cuddles on the big boy.)

I have not yet had the chance to get many of my own pictures of the beautiful little ladies, but until I do I want to share a picture that the local rescue had of them:
Although I may not have brought home a calico (yet), I did bring home a kitten nonetheless! Having grown accustomed to giving Rosie special care in her last years, and having been the human momma to special boy Evan for two years, I can openly admit that I have a serious soft spot for special needs animals. That being said, the rescue from which Gemma and Freya came often finds special needs animals under their care and in need of homes. One such kitten was brought to my attention around the same time my parents were adopting Gemma and Freya. I met the kitten on the day my parents brought home their two little girls, and on that same day arrangements were made for me to take home the special needs furbaby.

Let me first post the picture that the rescue group first shared with me (this little one's picture never even made it to the public adoption page, once the organization found out that I was interested and that I had experience with special needs animals): 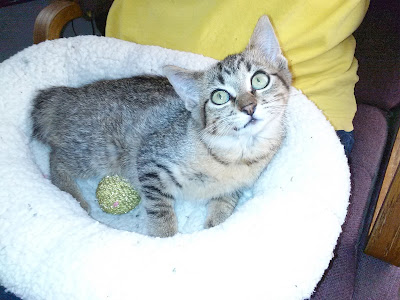 This is my newest little girl, advertised by the rescue group as 12 weeks old but I personally think she's a bit younger. After much deliberation, I have named her Eddy. I'm told that after a recent sudden event that has not yet been fully diagnosed, Eddy suddenly developed something along the lines of a neurological disorder. Her head tilts to the right (as mildly seen in the picture), sometimes quite drastically, and she sometimes will spin circles in that direction. The right side of her face also does not seem to function properly - her right eye does not truly blink (although her third eyelid does come up when she sleeps), and especially after yawning her mouth sometimes droops down on the right side. Don't let that get you down, though, because she certainly doesn't! This little girl loves to play and romp around. She does not always move in a straight line, but that doesn't keep her from having fun, or from making her way to her food bowl.

Eddy also loves human contact and loves to cuddle. But, when cuddle time is over, she can certainly advertise the fact that she was only trapped and brought around humans roughly two weeks ago. Her play can be a bit rough, both with humans and with other cats, and she has been known to hiss and growl when she does not get her way. That being said, I am continuing her socialization and she is doing very well with it.

Eddy is also doing pretty well with being introduced into the family, although she is not yet ready to be let loose with the rest of the furbaby bunch. When not out and about for play or cuddle sessions, I keep Eddy in the living room in a large cage that allows her and the other furbabies to interact safely. Thimble, Evan, and Toby are all very intrigued by her, and they approach her cage and even reach in to her frequently. Thimble is the most proactive with these meet-and-greet sessions. However, Eddy's play can get rather enthusiastic and Thimble prefers to scowl and walk away after being swatted and grabbed a few times over. Evan and Toby also like to investigate this new little lady, although more cautiously than Thimble.

Now, as for Astrid and Eddy...Astrid loves all cats and wants to be friends with all of them (and I mean all of them), including Eddy. Eddy, however, is just now being socialized with dogs for the first time ever. That being said, Astrid has so far been hissed at, growled at, spit at, and even swatted a couple of times for getting a bit too close. Astrid's a good girl, though, and she never lashes out at the kitten for these behaviors. Rather, Astrid tends to sulk away (with a heartbreakingly sad expression on her face), and then tries again later. This momma is determined to help Eddy realize that Astrid is not an enemy. In fact, Eddy already lashes out at Astrid far less frequently than when she first arrived.

I'll be taking Eddy to my vet on Thursday for her first visit there. The rescue does great work and helps a lot of cats, and they do work alongside a couple of local vets. But, I know that they certainly keep very busy with so many cats. So, I can't wait to get Eddy established at my vet and to let them have a look at her. I plan on discussing her neurological disorder with them so that we can all know more accurately where we stand with it, and so that I can know whether any medications or other treatments would benefit little Eddy.

That all being said, stay tuned for more pictures (and even videos!) of the newest additions to the family! Have a great week, bloggers!
Posted by The Menagerie Mom at 3:51 PM 3 comments:

Thimble woke me up this morning just begging to partake in the Sunday Selfie fun hosted by The Cat on My Head. So of course I whipped out my camera for her, and here was the result:
What's more, Thimble even posted the selfie herself! 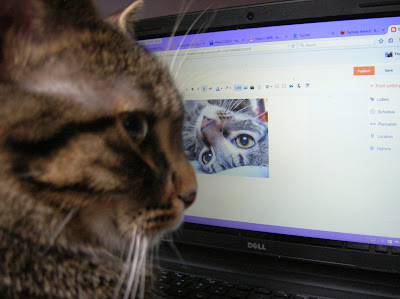 Posted by The Menagerie Mom at 8:23 AM 5 comments:

Things are starting to slow down a bit over here in my corner of the world, so I hope to get back to making more regular posts again. I did recently manage to get another short video of Evan, this time showing him playing with (taunting, torturing, etc.) his favorite toy - my hair tie! Again, it's by no means a high def video, but it lets you see how the little guy makes do just fine with what he's got.

A little over halfway through the video another star takes the lead in the film. Watch to find out who stole the scene...
I hope you're all having as much fun as Evan this week!
Posted by The Menagerie Mom at 9:05 AM 3 comments: