As always, my girl Thimble was eager to take her adorable selfie this weekend. However, this momma never made it onto the internet to post it for the Sunday Selfie blog hop hosted by The Cat on My Head. Sorry, Thimble! (My only excuse is that my refrigerator/freezer went out, which I discovered when I opened my freezer to find melted ice, ice cream, etc. The repairman came out, diagnosed it as a faulty compressor, and scheduled to come back and fix it just a bit later. By the time he arrived for the repair, the refrigerator/freezer was working perfectly. Even the repairman was flamboozled!) 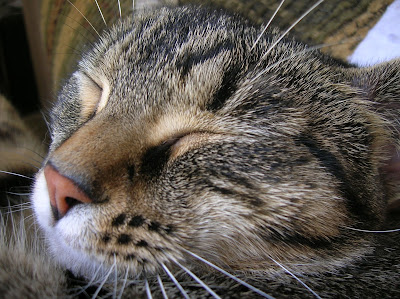 Have a great week, bloggers!
Posted by The Menagerie Mom at 8:43 AM 3 comments:

No, I did not buy another house. Rather, thanks to my adorable feline furbabies, the vet has become our second home these past couple weeks. Fear not, as all the furbabies are well. They just occasionally feel compelled to give this momma a reason to worry and call the vet (whose phone number, by the way, I have memorized).

It first started with Thimble. When I went home for lunch one day not long ago, I found a perfectly happy Thimble, except her ears were surrounded by sores.
I called the vet almost as soon as I found the sores, and Thimble was dropped off that afternoon. The veterinarian found that poor Thimble's lymph nodes in her neck were even swollen, and the best guess is that Thimble simply had an acute dermatological allergic reaction to something in her environment (perhaps an insect bit her, or Astrid or us humans dragged some flower, grass, or other allergen in from outside). The sores grew to look even worse after Thimble was dropped off at the vet, so she was prescribed prednisolone (a steroid). Luckily, after receiving just two doses of the steroid, her sores started to clear up. She is now in the process of being weaned off of the prednisolone, and so far her face continues to remain clear.
Just days later, though, little kitty Eddy suddenly went from having perfectly formed stool to significant diarrhea. And I truly mean that it was sudden, as the change from perfectly solid stool to diarrhea occurred within a couple short hours. Although Eddy remained active, playful, and more than willing to eat her beloved moist food, she quickly developed a nearly constant urgency to visit the litter box. On one instance she couldn't even make it to the litter box in time, the poor girl.

So, the vet was called again, and I took Eddy in with the lovely gift of a stool sample. No parasites nor any other concerning findings were noted in her stool sample, though, so we can only guess that she perhaps got into some of the big kitties' food or something of the sort, and her GI system was thereafter unhappy. Given the severe urgency of Eddy's diarrhea, the veterinarian started her on metronidazole (an antibiotic known to have great success in treating diarrhea) and probiotics. Although Eddy absolutely despised the taste of the metronidazole, she and I came to an understanding, and after just two or three doses of it her stool was back to normal.
Well, then it was my boy Evan's turn. Despite being on monthly flea preventatives and being completely free of fleas, and despite there being no mice to consume in my house, Evan suddenly started defecating tapeworm segments just this past Saturday. This momma was quite disturbed by that! Otherwise, Evan acted fine. So, I went ahead and waited until my vet opened on Monday (yesterday), and I called them first thing that morning and dropped Evan off shortly after (he was so nervous his paw pads were sweating, and his nervous bladder got the better of him, and it broke my heart).

While he was there, the veterinarian found no fleas or other obvious reason why he suddenly started defecating tapeworm segments, and all we can guess is that perhaps Astrid or us humans dragged in a tapeworm-carrying flea and that Evan somehow managed to acquire and consume it while bathing before his flea preventative could fight it off. Or, perhaps he's had the tapeworm for a while. After all, the four kitties (Thimble and her brothers) had fleas and tapeworm when we rescued them last summer, and I did find some fleas on Evan back then, and sometimes tapeworms can lie dormant. I do wonder about this in Evan's case, as, even though he is currently an ideal weight, he has lost three quarters of a pound over the past year. Perhaps he has had a lazy tapeworm lying dormant in there, the poor boy. But, I guess I'll never know. Regardless, he was given a dewormer yesterday, and I came home with a second dose to give him in three weeks. So, all is well.
The only furbaby of mine who hasn't been in need of a recent vet visit (at least not since her annual exam and vaccines back in mid-July) is the resident pooch Astrid.
I hope you are all having a great week, and that you're all staying away from those unexpected vet visits!
Posted by The Menagerie Mom at 1:40 PM 4 comments:

I completed another piece of art for my sweet angel Rosie. I started this one back on August 7th, which marked three months since my old girl's passing. I took my time with this one, and it actually took me a number of days to find just the right quote. But, it's finished now (at least, I think I'm done with it...).
Rosie has always been an inspiration and a muse for me. I hope you don't get tired of seeing my art of her, because there will be plenty of it.

I hope all you bloggers out there are having a great week!
Posted by The Menagerie Mom at 8:38 AM 6 comments:

Here's yet another video (of yet again less than ideal quality). I wanted to show you all how Eddy's doing, but since her lowest speed these days is roughly that of lightning, I have better luck getting video of her than trying (and usually failing) to coerce her to sit still for a photo shoot. In the video below I believe you can see how Eddy's head tilt is still present, more prevalent at certain times than others. But, that certainly doesn't keep her from being a perfectly active kitty! She also still has the right-sided facial nerve paralysis, which I personally think she owns and uses to her adorable advantage.

So, here's a quick video of Eddy, with an if-you-blink-you'll-miss-it cameo from Evan at the end!
Happy Monday and have a great week, bloggers!
Posted by The Menagerie Mom at 8:41 AM 4 comments: 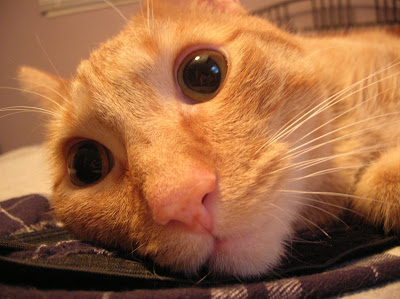 Posted by The Menagerie Mom at 8:19 AM 8 comments:

I've been thinking a lot about my sweet angel Rosie lately. I still miss her every day, but I also still talk to her every day, which certainly helps.

Tomorrow will mark three months without my little old lady. As I've mentioned before, I tend to seek solace not only in writing (perhaps you've seen some of my looooong posts on this very blog, for which I apologize) but also art. I've previously shared a couple art pieces that I've created for Rosie since her passing, and I honestly don't think I'll ever be done creating art for her. Perhaps I'm a bit biased, but I find her a perfect subject.

That all being said, I decided today to share another art piece that I created for Rosie. I actually completed this one a few weeks ago, around the two-month mark since her passing. The idea came to me to create a fun little series of drawings revolving around, of course, my furbabies. And, of course, one of the first ones I completed was for my Rosie. 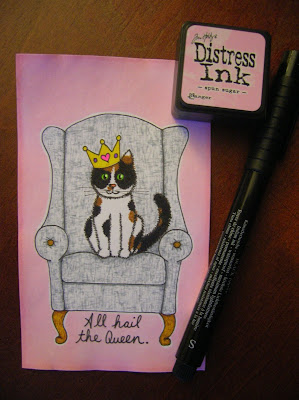 With tomorrow being three months since her passing, I have a desire to create yet another piece for her. I'll share it as soon as it's finished.

Purrs!
Posted by The Menagerie Mom at 8:59 AM 3 comments:

An Eddy update...and a video!

It's been too long since I've given an update on my new little girl Eddy. Well...she's doing great!

Eddy still has her head tilt, and her right eye still does not blink or close fully. She also sometimes leans to the right when sitting, walking, running, playing, etc. My usual veterinarian examined her just days after I brought her home, and, although no definitive answer can be given, she noted that it could have been a bout of toxoplasmosis that caused Eddy's sudden neurological issues, which could explain why she started to improve after the rescue group veterinarian started her on antibiotics. Her symptoms could also have been the result of an injury or even a stroke.

Despite her specialties, Eddy is a ball of energy and can move faster than a speeding bullet. Even so, she also loves cuddle time (although she still occasionally gets a bit riled and rough during cuddle time, she is doing much better with being taught that cuddles don't have teeth). What's more, Eddy absolutely loves her kitty housemates (Evan, Thimble, and Toby), and they play and play and play like there's no tomorrow. Eddy also has no problem playing by herself if need be, though, such as in this admittedly low quality video (and yes, she is playing with wadded up pieces of paper, which, just like Thimble, have become her favorite toys):
Isn't she adorable? (Not that I'm biased or anything.)

That all being said, the only real issue is that I'm just not sure Eddy will ever really like dogs (poor Astrid!). It's obvious that Eddy was not accustomed to the presence of dogs during her wild country lifestyle prior to being rescued. Sometimes I'll actually think we've made progress, such as when Eddy allows Astrid to approach and chew on a chewbone or even snooze near her. But then the next time Eddy will hiss and growl and give Astrid a well-aimed right hook. The saddest part is that Astrid, who is used to all of her kitty housemates adoring her, simply cannot fathom Eddy's aversion (and I'll admit that, as a result, sometimes Astrid gets a little too insistent with her friend requests).

Although neither of them seems interested in doing any real damage (it's actually Eddy that I'm most worried about doing damage, as she puts a lot of gusto into her hisses and swats), unless carefully supervised I do not yet allow Astrid and Eddy to have direct contact with each other. They can see and meet each other through baby gates, but I'd really rather not have my furbabies living in a segregated home. I hope that soon my continued efforts will spur Eddy to even begrudgingly accept Astrid's existence, even if only from a distance (at which point I'll have to convince Astrid to give up on those overkill friend requests).

Have a great week, bloggers!
Posted by The Menagerie Mom at 9:54 AM 3 comments: