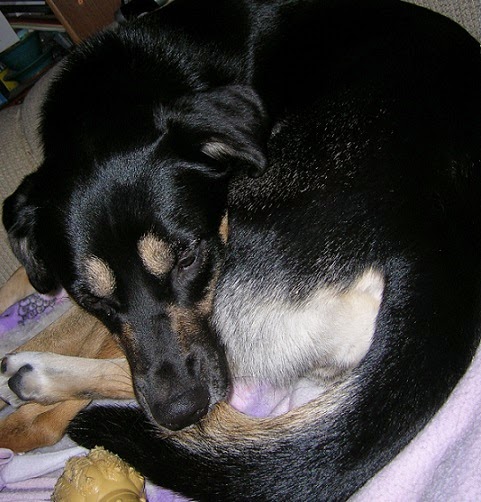 Posted by The Menagerie Mom at 8:18 AM 3 comments:

Thimble caught Mommy looking at pictures of her on the computer today. Thimble knows how cute she is, so she decided to join in.
Have a wonderful week, bloggers!
Posted by The Menagerie Mom at 10:47 PM 2 comments:

Today was the date when my sister and I have decided to celebrate Astrid's "maybe" birthday (which we also call her "maybe baby" birthday). We don't know exactly when she was born, so after we got her we had to do some deliberating to choose a "maybe" birthday for her.

When we first got Astrid in July 2013 she was roughly five months old, so, backtracking five months, we decided on a February "maybe" birthday for her. It was on July 12, 2013, when Astrid first appeared in my uncle's yard, so we initially considered February 12th, but since we already have some birthdays in the family on that day we ultimately decided against it. We first met Astrid on July 13th, but we quickly ruled out February 13th as her "maybe" birthday because that is the death date of Rosie's brother, Sammy, and it just didn't seem right to choose that same date as Astrid's "maybe" birthday. Well, it was on July 20, 2013, when we finally brought Astrid to our home to live with us, and ultimately we decided on February 20th as Astrid's "maybe" birthday.

Moreover, I'm happy to announce that Astrid loved her birthday gift!
Have a wonderful weekend, bloggers!
Posted by The Menagerie Mom at 12:38 AM 2 comments:

Email ThisBlogThis!Share to TwitterShare to FacebookShare to Pinterest
Labels: Astrid, Birthdays, dogs, gifts for the furballs

It's currently -1 degree F here in our corner of the world. We're almost to the positive numbers!

That being said, my furry babies and I are still anxiously awaiting warm weather. Although Astrid does enjoy short stints playing outside in the cold snow, I can tell she's especially starting to grow weary of it.
Sorry, Astrid. Soon you'll be able to watch out open windows and soak in the warm summer sun.
I hope you're all staying warm out there in your corners of the world!
Posted by The Menagerie Mom at 9:05 AM 2 comments:

My furballs and I had a busy weekend, but the hustling and bustling was by no means the worst part of it. The worst part was the frigid cold. Going outside was like entering into the Arctic. Although I honestly do enjoy sitting inside all bundled up and watching it snow during the winter months, I am officially really starting to long for spring and summer.

And I know I'm not the only one in this family who is longing for the warmth of the summer sun...
So, are you ready for summer?
Posted by The Menagerie Mom at 11:42 PM 2 comments:

I'm feeling a bit nostalgic today, so I've decided to share some throwback pictures. So, here you go...
I hope you enjoyed this little bit of nostalgia! Have a great weekend!
Posted by The Menagerie Mom at 9:08 AM 1 comment: 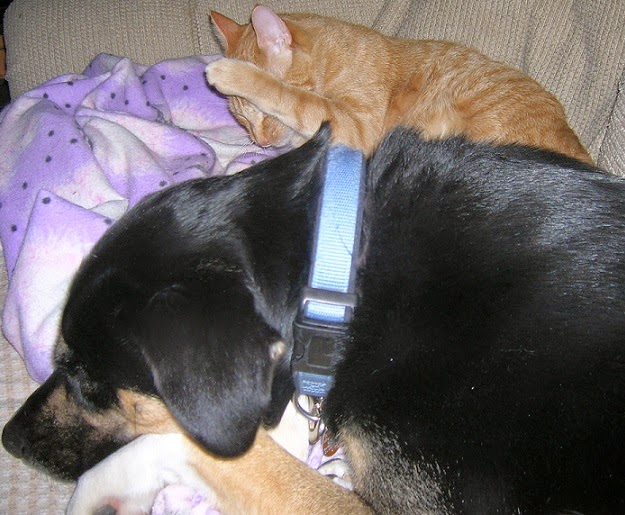 Posted by The Menagerie Mom at 9:38 PM 2 comments:

Posted by The Menagerie Mom at 10:17 PM No comments:

We've been without internet for most of the weekend. A technician was out today and managed to get it up and going again, although it's not 100% and he'll be out again tomorrow to work out the last kinks.

So, I guess it wasn't really a proper Easy Sunday. At least, not for us humans. For the furballs it's been a good day, especially since it reached over 50 degrees F today and the windows were opened for the first time in months!
I hope everyone had a wonderful weekend!
Posted by The Menagerie Mom at 4:35 PM 1 comment:

This Thankful Thursday is brought to you by Trapper. 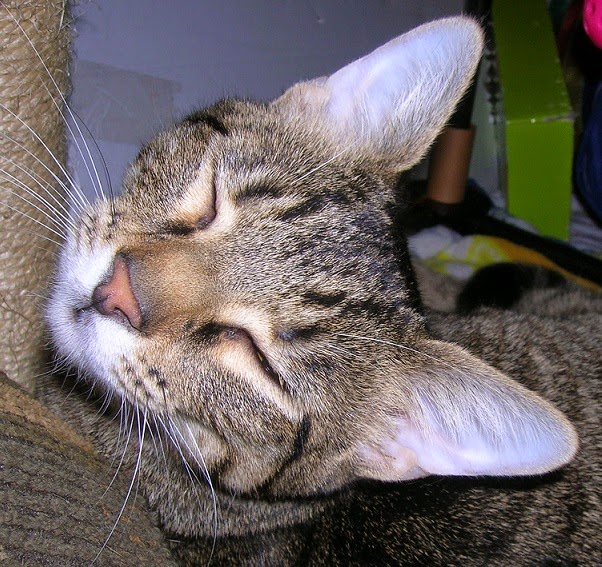 First things first, thank you for the purrs, prayers, and kind words for this little guy! Trapper is doing well!

He ended up not providing us with a stool sample before his vet appointment yesterday, so the vet had to manually retrieve a stool sample using what's called a fecal loop. Trapper was less than thrilled by this, but he ultimately let the vet do what she needed to do (although he did grumble the whole time). It was determined that Trapper has some bacterial overgrowth in his intestinal tract (possibly due to his sneaking dog and human food when we're not watching, naughty boy), which is in turn causing his loose stool and discomfort. So, antibiotics and probiotics it is for Trapper. He certainly does not like the taste of the antibiotics (Clavamox), but he's a good boy and begrudgingly allows us to administer it to him. And he already seems to feel much better!

It's a good Thursday to be thankful!
Posted by The Menagerie Mom at 8:25 AM 1 comment:

Wordless Wednesday, and then some. 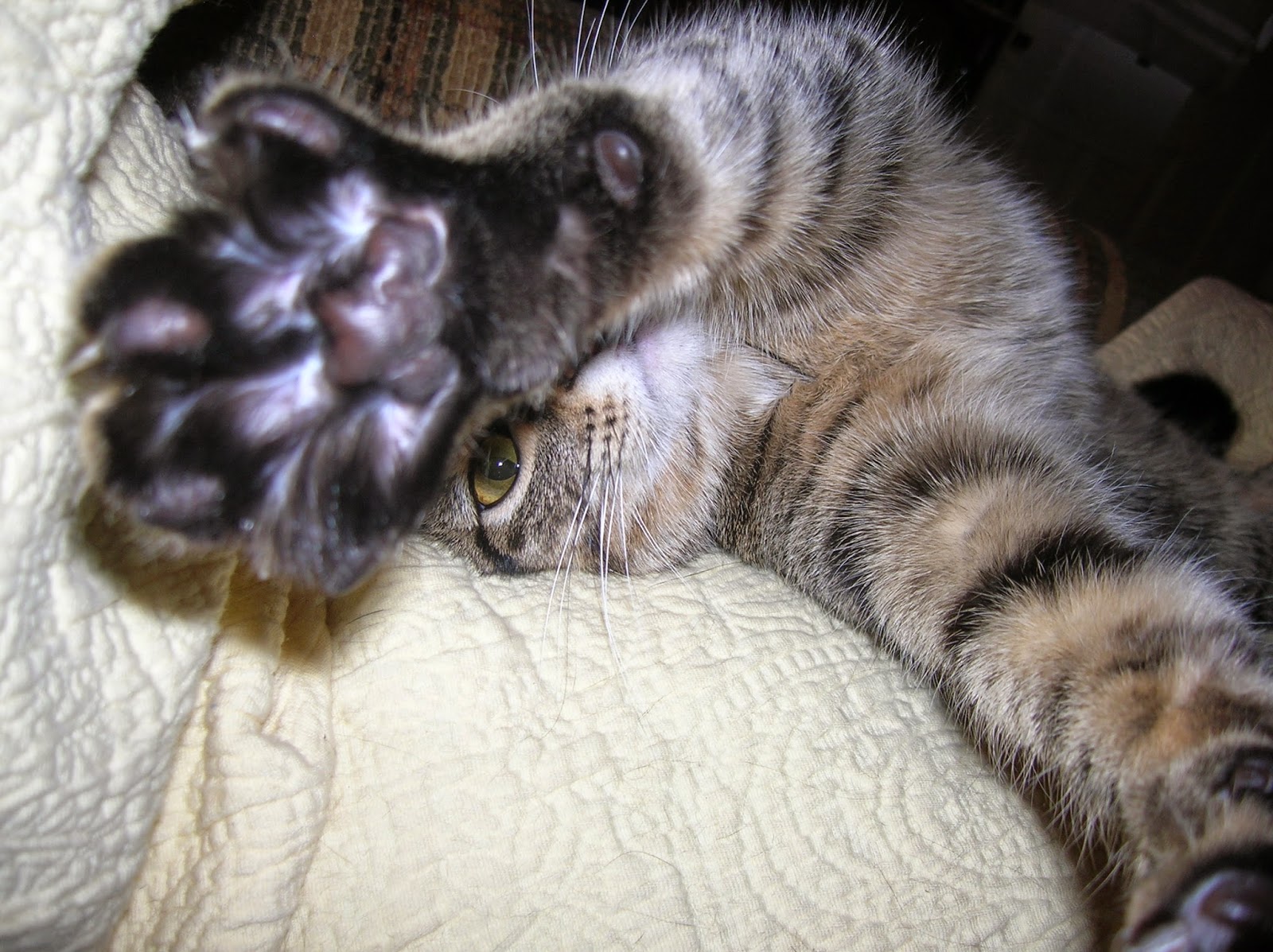 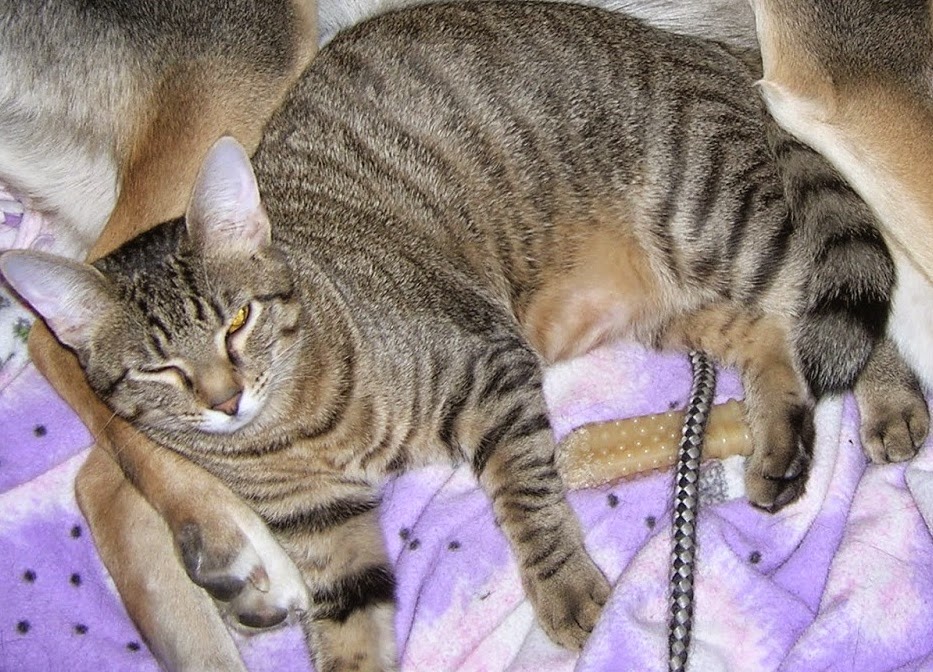 Trapper has always had on and off loose stool since a very young age, but the past couple of days it has gotten worse. Also -- how do I put this politely? -- he has been passing some especially malodorous gas lately. And this morning he's suddenly acting rather uncomfortable, as if he has a stomach ache and can't quite get cozy. He ate a little moist food this morning, but he's acting nothing like his usual hungry self. So, Trapper's going to the vet this afternoon. Although he hasn't provided one yet today, we're hoping for a stool sample so that parasites can be ruled out.

I don't anticipate that it's anything too serious -- hopefully just some shenanigans from his kitten intestines -- but of course purrs and prayers are appreciated for this little guy!
Posted by The Menagerie Mom at 8:49 AM 2 comments:

Although I am not truly a fan of football, I do enjoy Super Bowl Sunday for the funny commercials, and of course the Kitten Bowl and Puppy Bowl! But, more importantly, how were the furry babies in my life celebrating Super Bowl Sunday? I'll show you...
I hope you all had a wonderful weekend! How did you and your furry babies spend Super Bowl Sunday?
Posted by The Menagerie Mom at 9:02 AM 1 comment: