We usually start our Fridays with the Friendly Fill-Ins challenge, but this time around we'll mix it up a bit and start with a little something else. Today is the most important day of Tocktober.

Let's be honest, the furbabies around here have been withholding. Not a single one of them has allowed a single shot of their tocks to be snapped as of late. Fear not, though, for we have some flashback tock shots.

For today's Tocktober festivities, we're doing a flashback to last Halloween. These oldie but goodie shots involve a little ghost, an orange mancat named Evan, and a little cameo from said mancat's tocks. 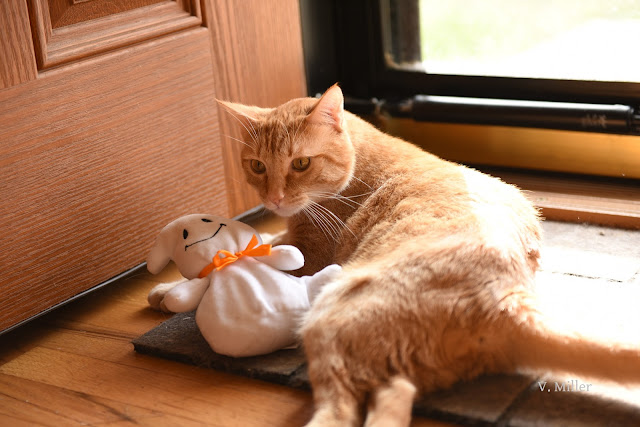 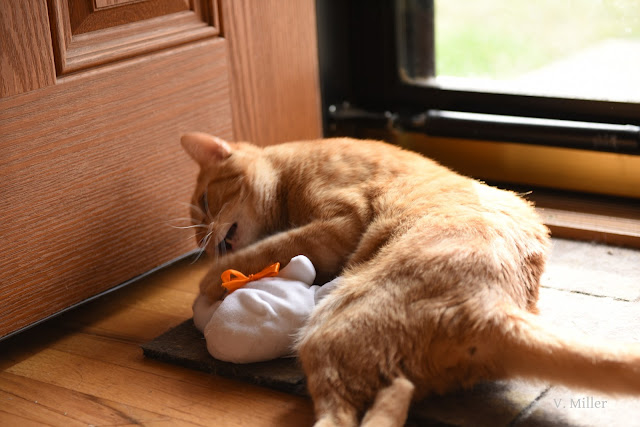 We have Evan's auntie (this human's sister) to thank for these shots. When Evan kidnapped himself a ghost from his mom's collection of Halloween decorations last year, his auntie whipped out her camera and snapped these evidence photos. Evan is a little perturbed that I didn't block out his private bits, but so it goes.

If I'm to be totally honest, I really wanted a shot of Thimble's tocks to share with you all today. Why? Because Thimble is known at our home for waving her cute little derriere around with little to no shame. How many of you have heard of this thing called twerking? Thimble pretty much does that every time she walks into a room. I'm thinking I should grab video evidence of this, since she won't let me photograph it. In the meantime, though, you'll have to settle for this: 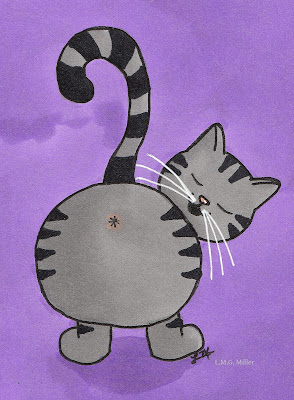 I most certainly can't take credit for this design. Thanks to Pinterest, I recently saw a photo of some coasters designed like this. If that's not inspiration, I don't know what is.

And now we will move on to the fantastic Friendly Fill-Ins challenge. 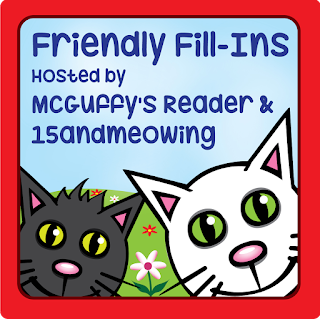 Our hosts over at 15andmeowing and McGuffy's Reader thought up some fun and festive fill-ins this week, that's for sure!

As always, I did my best to do these proud.

1. If I was a ghost, I would haunt an animal shelter.
(If I had to spend all of eternity in one location, it would be somewhere I could be with furry cuties. I would not want to be an angry or malicious ghost. Instead, I would want to be one who spends eternity doing something good, and keeping shelter animals company while they await their forever homes sounds like a good plan to me.)

2. I always have to prepare the couch for Evan when I settle down for evening TV.
(As many of you know, Evan is hind limb paralyzed. But, that's not why I have to prepare the couch for him. He can get up on the couch by himself just fine. The preparations I'm referring to include putting his most favorite blanket on his spot of the couch. That's right, Evan has a blanket that I'm not allowed to use, despite the fact that my parents got it for me for Christmas, as well as a spot on the couch that is his and his alone. If his blanket is not in his spot, he will give me the what-for.)

3. My favorite scary story is The Hound by H.P. Lovecraft.
(I always have trouble answering this question. I love spooky tales and enjoy so many stories by H.P. Lovecraft and Edgar Allan Poe. I also find if perfectly spooky and festive to read The Legend of Sleepy Hollow by Washington Irving. But, today, my answer is The Hound.)

4. I will be so glad when Astrid's bandage is removed and her incision is healed up.
(Astrid is doing great. After her initial mass removal last week, she was all shades of agitated. This time around, though, despite the fact that she is down an entire toe, she's doing fantastic. Nevertheless, I will be so happy when she is really, truly, all healed up. And, of course, I really hope the vet calls me and says that this time all margins of the sarcoma were removed.)


Now, this post isn't over yet. We of course can't forget to give you your Eddy fix! 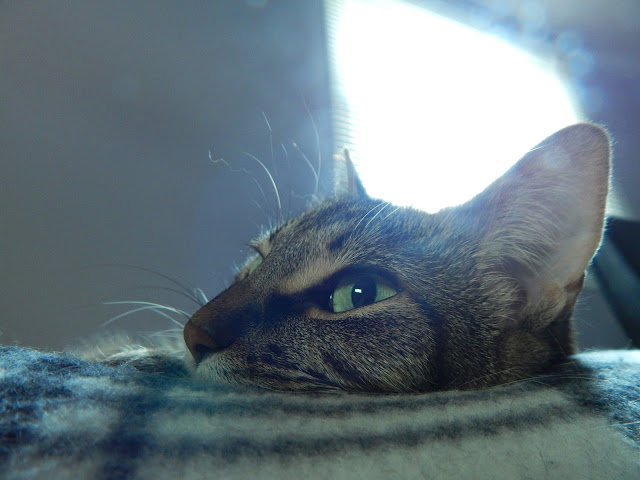 We want to wish you a happy Friday!

***
Our Tip of the Day:
As cold weather settles in, don't forget to have your furnace checked and cleaned as needed before you run it for the first time this autumn or winter. Also, don't forget to change the filter regularly. Neglecting the furnace and its filter can of course put you at risk of hazards such as a fire, but can also exacerbate things such as allergies and asthma, for both ourselves and our furbabies. So, for both the sake and safety of your furbaby and yourself, take care of that furnace!
Posted by The Menagerie Mom at 1:35 AM

We're glad to hear such good news about Astrid ! Nice tocks, and we love the drawing ! Claire is still trying to get a nice shot of Pixie's tocks, MOL ! Purrs

Evan, those are some mighty impressive tocks. Looks like you are enjoying that ghost. The drawing is just perfect for tock day. And Eddy, you are looking mighty good too. You all have a great day. Glad to hear that Astrid is doing all right.

First, you are funny. *good grief* You had me chuckling with the twerking story. Our Sam used to do that, while she talked nonstop (for over 19 years). Cute story about Evan, too. *hug* The Hound. That is s great answer! I agree. It is scary. If I had your address, I would send Astrid cool bandages! I am glad that she is recovering. HUGS.

Awww...Evan is the cutest ghostbuster ever :) Such cute tocks. Edy is adorable too. Thank you for participating in the fill-ins, great answers. I love your answer to #1, that would be the best place to haunt. I knew what #4 would be, I am praying you get good news with those margins too. I am not familiar with that story, but I will check it out. Very cute drawing and excellent tip, we got our furnace cleaned last month. Have a nice weekend! XO

I'd sue for that cute drawing, Thimble. She didn't get your good end. HAH! My tocks' shot is vintage too. Good work Evan. The peeps adopted Autumn in part because she was missing a toe cos TW thought no one else would want her. She was such a loving cat or so I keep hearing.

I know the coasters that you are talking about! Cute 'tocks!

We don't mind a vintage tock shot! And Evan's is purrfect! Haunting an animal shelter would be great...but let's not call it "haunting"...that sounds too scary and we would never want to scare the animals there. :)

We definitely want to see a video of Thimble twirking!

Those are great Tocks! We love Evan's mancat Tocks :-) Hey, and excellent Friendly-Fillins! We like the idea of haunting and helping the shelter kitties. Hugs you guys!

I don't think I've ever heard of The Hound! Must look for it :) Thimble, we need to see you twerking! Evan's little tushie is so precious. And I *love* your answer to #1!

Bear is why we can't have decorations! He's also why all my stuffed animals are on the very top shelves - he's tried to have his way with quite a few. UGH! Bear loves to show off his butt too ... I see it more than I see his face! We can't wait to see Thimble's little dance!

Our Marine likes Lovecraft. Good advice on the furnace. Our air conditioners run 365. Oh, it might dip down into the frigid 70s soon. But, we can live through that. We get very few days here where we need heat. We went two years before we found out the house didn't have heat. There was never a gas line run to the furnace.

Thimble can twerk? Bring it on

I hope that Astrid is going to be completely healed very soon. I'm sorry that she's dealing with these scary health issues. That's a nice photo of Eddy. I love eye pics. :)

Evan's tocks are wonderful and it was fun to see him wrestling with that ghost. Thimble's derriere doodle gave me a smile. I would love to see a video of her!

I love Evan's evening preparations. I sure hope you get that call from the vet about Astrid's paw and very soon. Yes, it will be so great once she's completely healed. I'm so glad to hear how well she's doing with the loss of her toe.

That is a fantastic shot of Eddy!