A little more on Rosie...

I'm sorry I didn't post an update over the weekend. I've been so consumed with watching Rosie like a hawk that I just didn't make it onto the internet much these past couple of days. So...

Rosie did get to come home on Saturday. The vet called me in the morning to inform me that Rosie's recheck pancreatic SNAP test still indicated that her pancreatic values were abnormal. However, because she refused to eat while being hospitalized, her vet decided to send Rosie (along with a couple of extra medications) home in hopes that she would eat and perk up a bit better in her familiar, stress-free home environment. In some aspects, that is what happened. Rosie did eat a little for me as soon as we got home, but only a very tiny, minuscule amount. She was still pretty lethargic, but that could also be attributed to the fact that she had just spent three days away from home with an IV catheter hooked up to her leg. So, Rosie rested most of Saturday, eating a couple of very small meals throughout the day. She did on occasion still smack her lips as if nauseous, but she never vomited.

Yesterday morning Rosie was a bit brighter. Even though it was a very small meal, Rosie did readily eat when I gave her some of her favorite Friskies food for breakfast. She also was a bit more of her usual vocal self. However, throughout the day Rosie started to decline. By the afternoon she would barely eat anything I put in front of her, taking a couple of licks at best. I noticed that her eye started to look dull and sunken in, her coat started to look very dry, and when I tented her skin it went back down very, very slowly. Obviously her dehydration was getting the better of her again. The vet had told me that, since Rosie was given IV fluids through Saturday morning, I should wait until Sunday to give Rosie her usual subcutaneous fluids. Well, by yesterday afternoon I felt horrible upon realizing that I might have waited a bit too long. So, I immediately warmed up Rosie's fluids bag and admittedly gave her a little more than the prescribed 100 ml's. Within an hour of receiving her fluids Rosie perked up. She ate a couple of small meals, her coat started to look far less dry, and her eye was brighter and less sunken in. She even took a little bath after one of her feedings!

This morning Rosie is still doing relatively well. She actually gave me my usual morning scolding when it got near feeding time, and she ate a decent meal of yet another of her favorite Friskies flavors. She is still far less active and alert than usual, but I am seeing small improvements now -- as long as I keep her hydrated. That being said, already this morning, roughly 12 hours after receiving her subcutaneous fluids here at home, I can tell that she's starting to dehydrate and slow down a bit again. I am going to talk to the vet today, and I will be asking her whether she thinks it is reasonable for me to give Rosie subcutaneous fluids twice daily, since going the usual 24 hours between fluid administrations obviously is not working ideally for her at this point in time.

The vet mentioned on Saturday that if Rosie is not improving by early this week then they would re-hospitalize her. The only problem with that is, as the vet has observed and is concerned about, Rosie simply will not eat away from home. Or at least she won't eat at the vet while hooked to an IV, which Rosie makes obvious that she does not like. Nutritional support is very important in treating pancreatitis, so her going on a hunger strike is not ideal. Therefore, if she can be managed with fluids and medications at home, where she will eat, then that would be great.

I'll make another update post once I talk to the vet. Hopefully I can soon get my sweet Rosie back to this (minus one eye, that is): 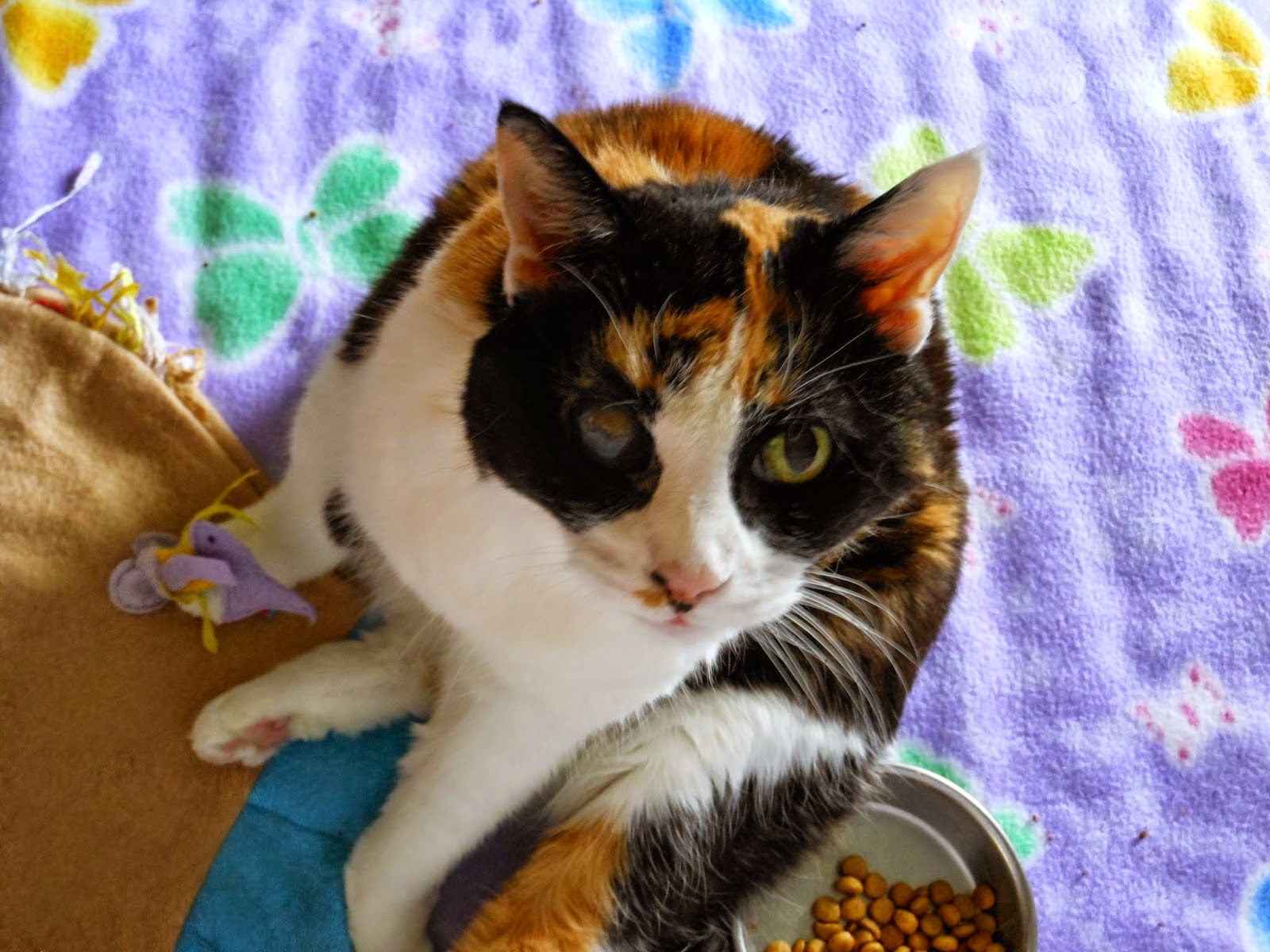 Thank for you for all of your purrs and prayers for my sweet old girl!
Posted by The Menagerie Mom at 9:39 AM

I do wonder if you'll need to give her fluids 2x a day. Sorry about my soapbox previously about fluids! I didn't realize that you're doing that and that they're a part of her treatment plan. It's wonderful that they made such a difference in her recent recovery. I really hope she can stay home with you where she eats.Rosie, we're still praying for you, sweet lady!

We will take encouragement wherever we can find it, and it is good that Rosie is eating a little. We will be curious to know what the vet has to say about the 2X/daily fluids. Purrs, hugs and prayers for you both!