Remember on Monday, when you saw Thimble instead of Evan for his usual Mancat Monday post? And now, here we are on what would usually be Thimble Thursday, yet there's no Thimble. I wondered if anyone would guess why Thimble and Evan swapped their days this week. A couple of you guessed that today is either Evan's birthday or gotcha day. But, neither of those is the reason for his starring in today's post (stay tuned, though, because in less than a month one of those is coming up for my boy Evan!).

Someone did guess it right, though, and that someone is Caren, mom to the adorable Cody and Dakota! She correctly guessed that Evan gets to star in today's post because it is, in fact, none other than St. Patrick's Day. (Good job, Caren! Check your email for a little prize.)

So, who better to star in today's St. Patrick's Day post than my boy Evan? He is, after all, my freckle-nosed redhead. He looks Irish... 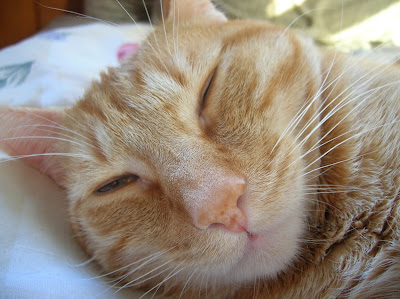 ...so he certainly seems the most viable option for wishing all of our furiends out there a happy St. Patrick's Day!

But, this post does go at least a little deeper than that...

I myself have a bit of Irish blood in me, even though I don't really have much to show for it (thanks, sis, for hogging what little red hair was left in the family!). My paternal great-grandfather was Irish, with, I'm told, the red hair and temper to prove it. Those Irish genes were passed down to my paternal grandmother and her reddish hair, and then to my dad and his famous red mustache that I remember so well from my childhood. My sister, as noted above, stole what little red hair genes were left.

Well, to make this long story short, despite my lack of evident Irishness, I have always been proud of and very interested in the Irish side of my family. Perhaps because the ginger side of Irish is present in my ancestry, I have always especially been intrigued by the stigma that you sometimes hear surrounding red hair. I never understood the negativity that certain folks throw at redheads - I, for one, have always thought red hair was pretty darn cool! It was in part for this reason that I always wanted an orange tabby cat. I didn't get any of my ancestors' Irish red hair, but there were cats out there that had it!

And then Evan came in to my life. 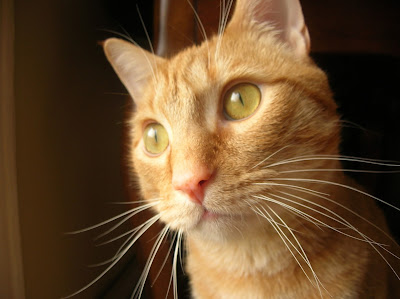 As some of you may remember, Evan lived the first few months of his life at the cat clinic where he was dumped and where I worked at the time. Within hours of finding the paralyzed kitten outside the front door, those of us at the clinic were going through names, trying to find the one that fit him best. The first name that came to my mind and that I was rooting for was Fergus. It has always been one of my favorite Irish names, and that adorable orange kitten just looked like a Fergus to me. In fact, Fergus was high on the list of names we were considering for that little orange guy. Want to guess another name that was considered for him? Patrick! In the end, though, the name Evan was chosen because in Welsh it means "little warrior", which indeed he was and still is.

Evan may not have been my first choice of name for him, but he's always seemed to love it, and so when I officially adopted him I had no intention of changing it. However, did you know that I like to consider Fergus to be Evan's middle name? I love to call him Evan Fergus, most often in a perfectly butchered Irish accent.

So there you have it. Evan is my ginger boy, making up for the Irish in me that no one else can see. 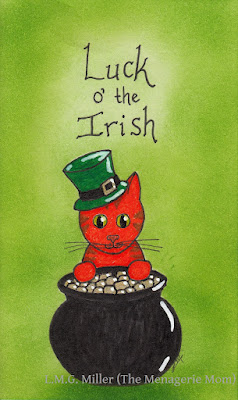 From Evan (Fergus) and all of us, we wish you a happy and fun St. Patrick's Day!


***
Our Tip of the Day:
Perhaps this is a good day to remind everyone that alcohol is toxic to dogs and cats. Alcohol poisoning can become life threatening to dogs and cats very quickly, so please don't share any of that Irish brew with your furbabies!
Posted by The Menagerie Mom at 1:39 AM

We did NOT guess why. We blame TBT fer not tellin us about today several days ago! He's in charge of that stuff, and he FAILED!

Happy St. Patrick's Day! Evan is such a handsome boy. I have two oranges. :-) My husband has red hair--more gray now. Kids made fun of his red hair when he was s boy and he's always disliked it. But I think it's pretty,

Evan, that is such a great St. Patrick's day story. Evan, you make a great red headed cat. Sure glad you Mom was there when you got dumped. You do have the luck of the Irish.

What a fun story about Evan Fergus! This is too cute. "Little Warrior" is truly a perfect name for him, especially in light of everything he went through as a kitten.

You are such a lovely boy Evan and we are sure that you will have found a purrfect family to live with.
Luv Hannah and Lucy xx xx

Happy St. Patrick's Day to all of you!

Happy St. Patrick's Day to all of you! You and Evan sure had the luck of the Irish when you found each other. Great tip- no green beer for kitties :)

Happy St. Patrick's Day to you all too and especially Evan. That's quite the story little pal. M says there is no Irish in me nor M nor D, but she wishes there were. She said no one ever celebrates Norwegian Day nor Swiss Day nor German Day. It's kinda sad that they don't. We always wanted to adopt St. Patty's Day since our nationalities don't have a special day. So for today, we're Irish too.

Happy St Patricks day to all! We brought some Green Niptini's along with Green Treat to celebrate with! Whee we are all a bit Irish today
Timmy and Family

Happy St. Patrick's Day! Evan, you look great, and we love the drawing!

Happy St. Paddy's Day! Raise a glass of CK Irish Cream! I have a Twitter woofie furrend named Fergus. He's Welsh. Nicky once sampled the Bailey one Paddy's day when the peeps weren't paying attention. TW used to always dye her hair auburn or black cherry. Nothing wrong with a little red.

We love your story about the Freckle-nosed-handsome-Irish-looking-Evan cat, MM. Hope you had and I am sure you had, a wonderful day. Double Pawkiss for a Happy Weekend :) <3

I LOVED reading the background on your family....my sister-in-law is a natural redhead, her daughter and son are redheads too (and they are Jewish! lol)..........love seeing Evan, such a handsome boy!!
I was sooooooooo happy when I got your email (hoping you received my reply that I wrote in the wee hours of the morning, since my email wasn't working on my computer). For some reason I could access the mail from my phone, but not from the computer. I LOVE the prizes and am planning on featuring them this week!! THANK YOU!!!!!!!!!! I have been battling a cold/bronchitis and your surprise made me smile!! Thank you soooo much! xoxoxo catchatwithcarenandcody

Loved your story. I think alittle of the Irish is showing, though! LOoooved your kitty illustration!

Loved your story. I think alittle of the Irish is showing, though! LOoooved your kitty illustration!