An evening with cats.

I recently learned that the video feature on my new camera is much better than that of my old one. (Don't get too excited, though, because I'm certainly no film producer, and I have zero skills in proper movie lighting or directing wayward actors.)

Now, I intended for this to be Eddy's post for the week. 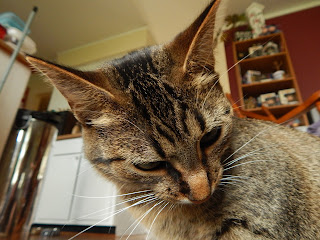 I thought I'd get a video of little Eddy playing with her beloved track ball toy. But I thought wrong. She was just as coy for video as she was for this picture.

So, I instead parked myself on the floor after dinner and just started taking video of what a night in with my kitties is like, in hopes that they'd all provide sightings of themselves and their escapades. They obliged.

(Be careful with your volume at the end of this one. Although I managed to spare you the sound of my voice by keeping from talking in this, I couldn't keep my cell phone from ringing in the last couple seconds. If you're not expecting it, and if you have the volume up, it could be a cruel joke.)


I know that life can get pretty busy, and this video is a lengthy six and a half minutes. If you don't have time to watch it all, I completely understand. But feel free to watch as much as you'd like to get a taste of my kitties' shenanigans.

Oh, and you'll see in this video that I did after all get evidence of Eddy's love for the track ball toy. If you want to zoom to where Eddy gives a preview of the concert she puts on for me every night at 3 o'clock in the morning, go to the 3:45 mark of the video, with an enthusiastic encore at 4:15.

Wishing all of our furiends a terrific Tuesday!


***
Our Tip of the Day:
In the wild, cats are nocturnal. They hunt at night. Many of our domesticated kitties may carry this nocturnal behavior with them. That's why you may know your cat to prowl the house at night, attack your feet under the covers while you try to sleep (there's nothing like a good hunt under the cover of darkness!). and perhaps beg for food and attention in the wee hours of the morning. If you hope to curb some of your kitty's nocturnal behavior, try promoting nighttime snoozies by putting out additional warm and cozy sleep areas for them before you go to bed. Also try playing with kitty before bedtime, to help tire them out as well as to hopefully satiate their hunting fix for the night. And perhaps your kitty would benefit from eating its biggest meal just before bed, rather than first thing in the morning, which can put kitty in the habit of waking you up earlier and earlier for food each morning.
Posted by The Menagerie Mom at 7:05 AM

That was fun to watch Eddy with the trackball. She certainly got it moving.

We have one of those trackballs and we hardly play with it anymore. After seeing this, we're gonna give it a go again!

That's one of Mudpie's favorite toys too! And an evening with cats is the best kind of evening you can have :)

Wow, Eddy is amazing! She really gets that ball going fast. It was fun seeing all your kitties.

I read your post about your Etsy shops. Congrats! What a fun thing to do and how nice to help other kittes as well!

Good idea on feeding kitty the bigger meal at night!

MOL! TBT can take videos, but he can't figure out how ta upload anny...

The trackball is one of my favorite game too ! Purrs, Pixie

Great video! Eddy should be the poster girl for trackball. Great tip.

Cody has never played with his track as enthusiastically as Eddy! Loved this!! catchatwithcarenandcody