Hello and happy Caturday! Today, we are of course participating in both the A to Z Challenge and Athena's Caturday Art blog hop. 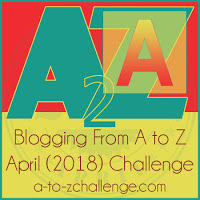 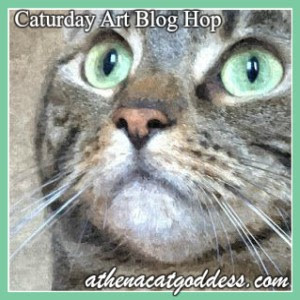 The letter of the day is M. As per usual, the theme we're following involves putting an animal-inspired twist on a classic story title. Unlike some of the letters of the alphabet, I had a number of options to choose from for M. I had a tough picking what to do, and so I finally just eeny-meeny-miney-moed my way to this: 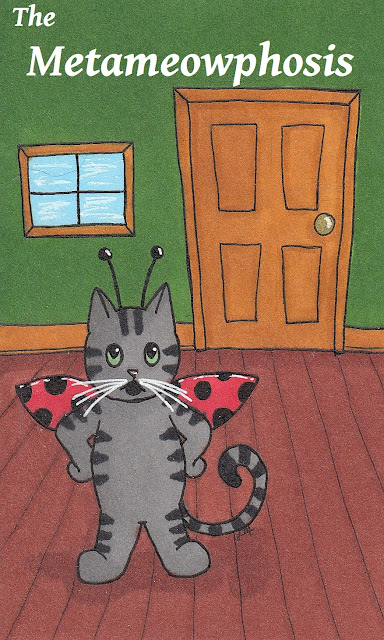 Has anyone here read The Metamorphosis by Franz Kafka? I have honestly only read excerpts of it, and from those I could tell it is certainly a unique read. How do you think The Metameowphosis would play out?

We hope you all have a beautiful day!

It is also worth noting that, though nowadays is is believed not as prevalent as originally thought, it is still possible for humans to get Giardia from cats and dogs. For this reason, always be sure to wash your hands after cleaning up their waste, especially if they are known to have Giardia. Giardia is not something to take lightly, neither in our furbabies nor ourselves.
Posted by The Menagerie Mom at 12:48 AM

Happy Caterday to you, too!
Very fun, and then very informative. Thanks for this great post. Happy a to z.

Love the doodle of the kitty morphing into a butterfly (or vice versa???).

That is such a cute doodle! I read The Metamorphosis in college umpteen years ago. The Metameowphosis looks like a much happier story! :)

We love the drawing.Looks like a good morph to us. A kitty probably would enjoy being a butterfly. You all have such a good day.

I love the doodle.
Thank you for the information.
Yael from PlayingInCatnip.com

I've never even heard about it, much less read it, but the art is adorable!

We haven't read the book but the buttercat is adorable.

I have not read that book, but I love your take on it. Very cute drawing. And excellent tip, I was not familiar with. XO

That doodle is SO cute!

Such a cute doodle today. :)

Our dad, who majored in comparative literature, says that kitty is WAY nicer than what the man in Kafka's book turned into!

My sis-in-law had Giardia many years ago, and she continues to have problems from it! Avoid it at all costs!