We have a rhyme to share with you all today. After all, it's time for Angel Sammy's Thoroughly Poetic Thursday challenge.

As always, our host shared a photo prompt to guide us. This week's prompt is this cute image here:

When I was in high school, the show called Meerkat Manor began airing and became pretty popular. It followed a family of meerkats, and I remember enjoying watching it, at least in its early days. I was always amazed by how close-knit the meerkats generally were as a family. That all being said, my poem below doesn't do any sort of justice to meerkats and the intriguing creatures they are. I didn't have much of a plan going into my poem, and so I ended up with a silly little (well, not so little) rhyme.

It was Bitty's birthday.
She awoke and shouted, "Yay!"
There would be a birthday bash going on soon,
With a cake served well before noon.

Bitty's family was big and grand.
She had a mother, father, brothers, sisters, and a nan.
Bitty found them hustling, bustling, and preparing for her big day.
They brought in the cake and other delicious foods on trays.

Bitty squealed in delight at the sight of her cake.
It had three tiers, purple icing, and surely a delicious taste.
Bitty's mother placed on her head a pretty, pointy little hat,
Saying, "Here you go, birthday girl. How do you like that?"

Bitty smiled wider than wide.
There was so much to see, her eyes darting side to side.
Her mother said, "Your guests will arrive any time now.
I invited everyone you asked, and how."

Just as Bitty's mother had promised,
Guests began to arrive, starting with her pal Thomas.
Bitty greeted friends, family, and all sorts of familiar faces.
They poured in for the party as if running races.

Then, though, arrived a strange guest or two.
Bitty didn't believe these guests were ones that she knew.
Truth be told, they sort of made her nervous.
She worried their visit did not have a birthday purpose.

"Who are you?" Bitty finally managed to ask the strange guests.
On Bitty the strangers' wandering gaze did finally rest.
"Oh," said the one donning on its head a large mane.
It added, "Leo is my name.
And my friend here, his name is James."

It was James, with ginger hair, who then asked,
"Are you the birthday girl? Am I right about that?"
Bitty nodded and then scurried away.
"There are strangers here!" to her mother she did finally say.

"Strangers?" Bitty's mother repeated as a question.
"Why would you make such a suggestion?
Everyone here are those you asked to be invited.
Please tell me you're at least a little bit excited."

Bitty said, "I am indeed looking quite forward to my birthday party,
And I'm not trying to be a rude sort of smarty,
But I'm really quite concerned by those two guests over there."
Bitty pointed to the ones with the mane and orange hair.

"What has you so confused?" Bitty's mother asked.
"You told me to invite all of Zoolandia's cats."
"Kats," Bitty replied. "Kats with a K.
You thought I said cats with a C, you say?
That's why a lion and tiger are here today?"

Her mother asked, "You meant kats with a K, Bitty?
Why on earth would you say something so silly?"
"Because we're meerkats, Mom!" Bitty did say.
"Kats with a K is what the cool meerkats say these days."
She added, "Can we send those two guests away?"

Bitty got no sympathy from her mother,
Not on the day of her birthday or any other.
"We do not uninvite guests," her mother told her.
"There is nothing more cruel or ruder.
Now go greet each and every guests with kindness.
Judging a book by its cover is like living with blindness."

Bitty did as her mother said,
Though she did it with a sullen, lowered head.
She approached the two strange guests like her mother told her,
Even though they were a rather large lion and tiger.

"Welcome, and thank you for coming to my party," Bitty told them.
"You said your names were Leo and James, yes?"
"Yes, indeed, and you must be Bitty," Leo said with a bow.
"I believe we owe you happy birthday wishes right about now."

Bitty tried to smile, but instead she blurted out,
"Do you eat meerkats, is that what this is about?
Are you going to eat us?"
Leo laughed and said, "Don't be ridiculous.
We're better behaved than that.
We won't be eating any meerkat."

"Then why are you here?" Bitty could not help but say.
James smiled and said, "Because it's your birthday!
We got an invitation for this party the other day.
We hope you don't mind if we stay.
It's been quite some time since we've had a taste of cake."

Remembering what her mother told her to do,
Bitty said, "Please stay, and thank you."
She still could not help but watch them from the corner of her eye.
She thought perhaps they would try something sneaky and sly.

But when it came time for gifts and cake,
Bitty realized the two strange guests had no suspicious moves to make.
The lion and tiger had brought gifts for her birthday,
Including grand toys that would make for hours of play.

Those two named Leo and James were then first in line at cake time,
But trying to nab the first piece was not their crime.
Bitty watched as the two handed out cake to everyone else.
Bitty was the first to receive cake from the lion and tiger themselves.

Her mother had been more than correct.
She couldn't go around treating strangers like suspects.
She had judged Leo the lion and James the tiger by their cover,
And Bitty was glad she had been called out by her mother.
In fact, after that day Leo and James remained good friends with Bitty.
It didn't matter if they were a kat, cat, or kitty. 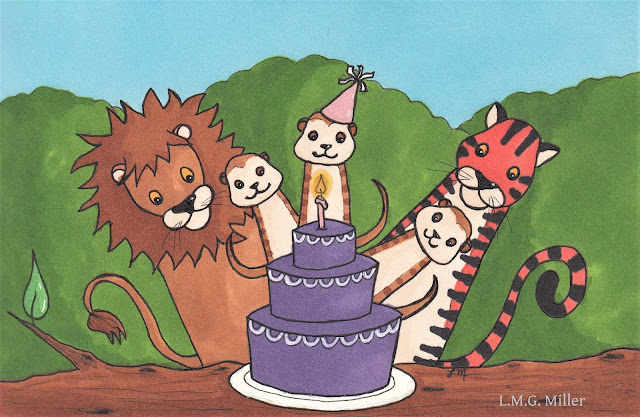 
Now, of course, it's time for Thimble and her Thankfuls. 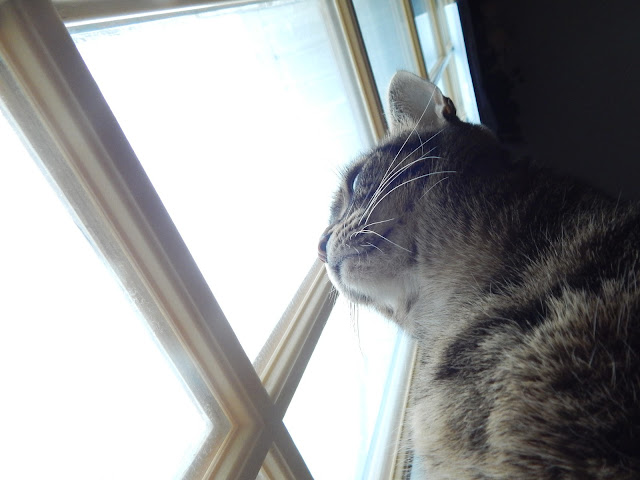 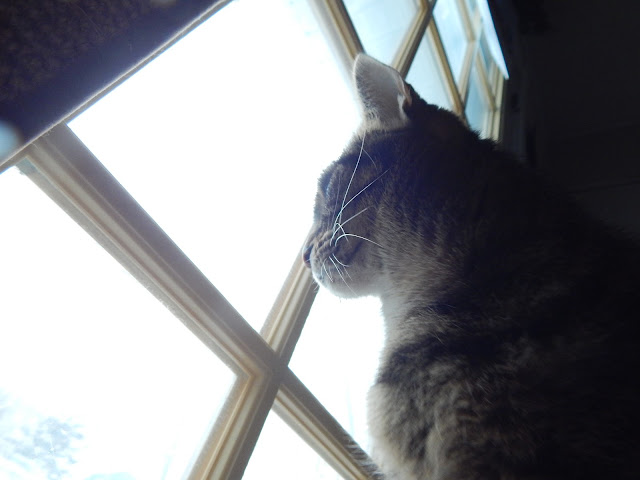 Thimble is also grateful for her stunning whiskers. Even the camera thinks her whiskers are gorgeous and wanted to focus on them. 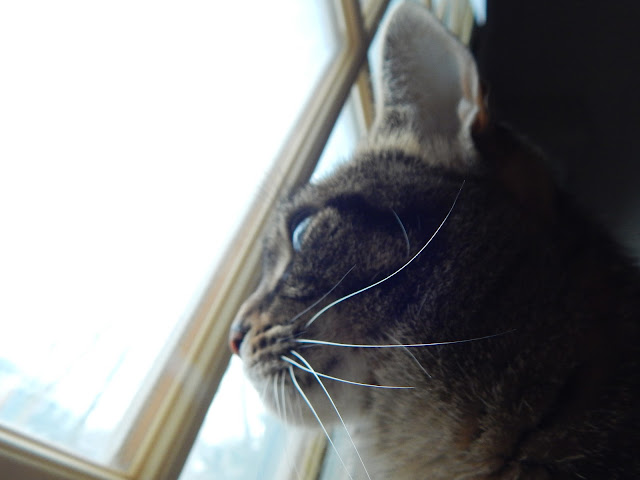 I had actually instructed my camera to focus on Thimble's cute little nose for this photo, but it decided the tips of her whiskers were a far better option.

As always, we're also thankful for all of you friends of ours. Thank you for making this blogging community such a wonderful place to be!

And now we have for you the fill-in statements for tomorrow's Friendly Fill-Ins challenge. Ellen of 15andmeowing crafted up the first two, and I came up with the second two.

Among other things, February is National Pet Dental Health Care Month. So, of course we'll be giving a couple of tips on keeping those pearly whites healthy and happy. Let's start with a quick discussion on at-home care and dental disease prevention. First and foremost, of course, is the act of brushing your furbaby's teeth, which can help remove food morsels, plaque, and other debris that could lead to tartar and other dental issues. Though this is not a job that every furbaby enjoys or even allows, if they are trained to accept it and it is done correctly, brushing can help keep those teeth healthy and happy. There are pet-friendly toothpastes and other oral cleansers out there, as well as pet-friendly toothbrushes and other similar tools for cleaning those teeth. There are even products on the market that more heavily focus on helping treat gum disease, such as for those furbabies with a history of gingivitis or stomatitis. Not all dental products are created equally, though, so if you are unsure what is safest or best for your furbaby, then most certainly discuss the options with your veterinarian.

There are also other types of products on the market that can potentially help teeth remain as healthy as possible. These of course include treats and food formulated for dental health. This is something that again can be discussed with your veterinarian, as he or she will best be able to guide you to products that are the most reliable and effective.

Dental care can of course start at home, but do keep in mind that it is still possible for tartar, gingivitis or stomatitis, and other forms of dental disease to arise even with brushing and other at-home care being used. Tomorrow we'll discuss some of the symptoms you might notice if your furbaby's oral health is in need of further assistance.
Posted by The Menagerie Mom at 6:58 AM

That sure is a nice poem. And Thimble, those are some mighty fine whiskers. Hope all of you have a fine day.

Such a sweet Bitty poem and wonderful Thimble thankfuls. Thanks for joining the Thankful Thursday Blog Hop!

Another delightful story/poem! Bitty is just too sweet, and mannerly tiger and lion.
Thimble, you are gorgeous.

I adored Meerkat Manor and have every episode on DVD! I miss that show so much. Your poem is just adorable!

That was an excellent poem- it would be a sweet children's book. I love the drawing too And Thimble, those are wonderful whiskers. Good tips too. My vet had me get some Hill's dental diet to give as snacks to help prevent tartar. I look forward to your fill-ins.

What a fun story poem you always write, i enjoy them, and Thimble!

That was QUITE a poem! And TBT used to watch the Meercats Show every week. He was in tears when matriarch Flower died...

That is a wonderful story poem about some meerkats having a FUN time celebrating which is what I imagine they do a lot of as a group. They seem to enjoy each other's company a lot and a party is a perfect way to do that! Your doodle with meerkats is beyond SWEET too. You captured the fun perfectly. Thanks for playing poetry with us every week!