Our host always shares a photo prompt to guide us on our poetic endeavors. This week's prompt is this intriguing image here:

Since Valentine's Day is tomorrow, and since as a result I've been scribbling up some doodles revolving around sweet treats, I went that direction with this image. That seems like a strange topic to pick for an image of this nature, but I tried to make it work. I don't know if the result makes all that much sense, but here's my poem nonetheless.

The two gals lived happily together in the country,
In a cottage somewhat quaint and a tad bit funky.
They spent their time working and napping and reading and snoozing.
Some days, Daisy Mae would leave Ruby Sue worried.
After all, the little tabby had a penchant for sneaking out the door in a hurry.

One day, Ruby Sue was keeping a very close eye on Daisy Mae the escape artist.
After lunch, Daisy Mae brought Ruby Sue a ribbon of scarlet.
The tabby cat dropped the ribbon at the woman's feet.
Then, tilting her head forward, she let out a meow to speak.

"You want this ribbon in your hair?" Ruby Sue asked.
Daisy Mae's reply came in the form of the chirps and purrs of a happy cat.
Ruby Sue did exactly as Daisy Mae wished,
Tying the scarlet bow atop the cat's head with a couple quick twists.

Ruby Sue smiled and told Daisy Mae, "You sure look pretty."
In front of the woman now pranced a very happy and confident kitty.
Ruby Sue was soon thrown for a loop, though,
And it was Daisy Mae who made her feel just so.

It happened when Ruby Sue went to fetch the mail.
When she opened the door, what ran past her was a cat with a striped grey tail.
"Daisy Mae, you get back here!" she shouted.
"I told you that you're not allowed on any more outings!"

Ruby Sue ran after Daisy Mae in hopes of catching her,
But Daisy Mae proved much, much faster.
Ruby Sue shouted, "I don't like it when you leave!
Daisy Mae, you get back here and stay with me!"

Daisy Mae simply did not obey.
They ran through plains and fields with bales of hay.
A building suddenly appeared in the distance,
And Daisy Mae ran toward it with great persistence.
The building looked like it belonged in a tiny town with a population of 1.
It was dilapidated, secluded, and creepy, and then some.

As they approached, Ruby Sue saw that the building was an old barn.
Time and weather had done the thing great, grave harm.
As Daisy approached its door,
Ruby Sue felt a great deal of horror.
She shouted, "Good grief, Daisy Mae, don't you see?
This is the kind of place where people get murdered in the movies."

Ignoring Ruby Sue, Daisy Mae slipped inside.
Ruby Sue followed with a dreadful sigh.
Compared to the exterior, the interior of the place was really quite swell.
It was rustic and quaint, and full of delectable smells

On one wall hung a sign that read, Barnyard Bakery.
There was another sign that Ruby Sue then did see.
It was a menu advertising all sorts of baked goods,
From chocolate chip cookies to cakes with perfectly romantic looks.

Ruby Sue soon caught sight of Daisy Mae sitting at a table with another cat.
This other feline had a built-in tuxedo of white and black.
An old woman then suddenly appeared.
She said, "Oh, hello there, dear.
Is that adorable grey tabby your cat?
She's visited a couple times and formed a friendship with my boy Jack."
The tuxedo cat mewed at the sound of his name,
And then he and Daisy Mae ran off in a chase of a game.

After scanning the menu that offered all sorts of delicious makes,
Ruby Sue finally asked for a cupcake.
The old woman retrieved a cupcake from a glass-covered shelf.
She also grabbed a slice of cake that she then began to eat herself.

At a table together, the old woman and Ruby ate their cakes.
The cats, of course, also got their tastes.
Ruby Sue found the old woman and herself having a delightful conversation,
All while Daisy Mae and Jack partook in all sorts of wild races.

Though Ruby Sue was not happy with Daisy Mae for escaping,
She couldn't imagine never again eating this delicious cupcake,
Or never again having with the old woman such a lovely conversation.
That's probably why thereafter Ruby Sue and Daisy Mae returned again and again.
At the Barnyard Bakery, they all feasted on sweets as a group of hungry and happy friends 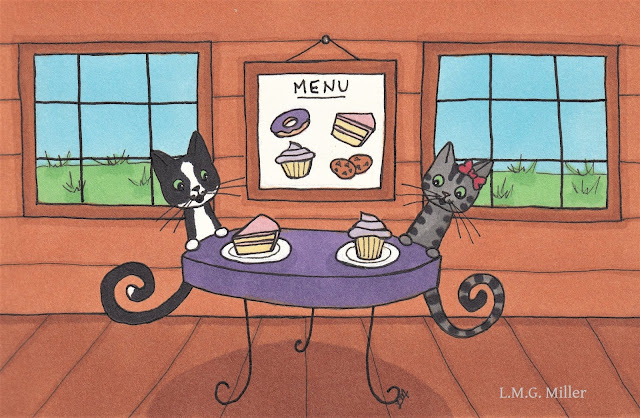 Thimble is now here to share a Thankful or two. 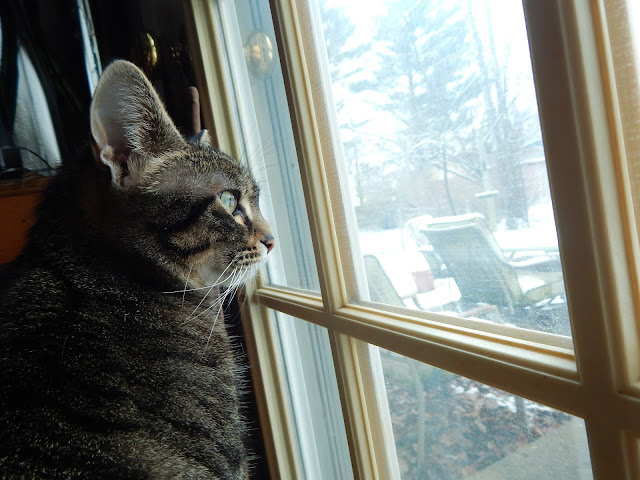 Thimble is always grateful for her window views. She's also thankful to be inside where it's warm on this snowy day. We purr and pray for all the homeless kitties and other animals and folks who are living outside on these cold days.

Our current topic of conversation stems back to the fact that it is National Cat Health Month. Yesterday, in our tip regarding diet, we made a comment on the fact that your kitty's weight will indeed help determine the best diet for them. Today's tip is a continuation of that topic of weight. If your cat is overweight, for example, then portion control is of course important, as is the type of food, frequency of feedings, and other such factors. There are weight loss cat foods on the market, these often focusing on high protein intake, but do be sure to discuss with a veterinarian your kitty's weight and the best diet to help them live a healthy, fit life. Similarly, if a cat is underweight, such as due to an illness, diet can play a large role in increasing their weight and overall health. Again, discuss with a veterinarian what type and quantity of food to feed your cat in order to achieve an optimal weight.

Moving on from diet, though, we'll now briefly discuss activity level. We'll primarily discuss this in terms of overweight cats, as activity level indeed affects this greatly. So, especially if your cat is overweight, engage them in various activities and games each day. You can grab a toy and play chase or catch with them. Wand toys, as you all certainly know, are often great at getting cats up and moving. You can also enlist the help of more advanced interactive toys, which can keep your cat busy without you having to do all the work. Anything that is safe yet that also keeps your kitty's interest and prompts them to move around and participate in daily activity can be a great benefit to their body condition and overall health.

The above being said, if your cat is in any way ill or injured, such as with asthma or an injury, do be sure to discuss with a veterinarian what types of activity are safe for them. Diet and activity level will both of course play a large roll in keeping your cat's weight in a healthy range, but not all diets and activity levels are suited for all cats. So, if your cat is overweight, or even underweight, perhaps do some research, discuss your individual kitty's condition with a veterinarian, and then remain motivated and optimistic about getting your kitty healthy and fit.
Posted by The Menagerie Mom at 6:49 AM

Such a cute poem and I'm glad you're enjoying your window views sweet Thimble. Thanks for joining the Thankful Thursday Blog Hop!

Aww, this was a terrific story/poem!
Making new friends is always so much fun.

The doodle and poem are just too cute!!! As is Thimble, of course!

Great poem, as always and I love the drawing too. Thimble is a cutie. Excellent tips too.

You have such a fun imagination!

I think you did a wonderful job with that wacky and eerie (sort of) photo Angel Sammy gave us this week - it wasn't easy coming up with something for it BUT you did! How about that old truck in next week's photo? It's blending in with its' surroundings like a chameleon!