Welcome to this day called Friday, friends! Today we have the Friendly Fill-Ins challenge. Want to join in on the fun? If so, we'll share the fill-in statements again below. Ellen of 15andmeowing came up with the first two, and I came up with the second two.

2. Last year at this time, I was _________.
3. _________ is my favorite kind of weather.
4. One random fact I happen to know is _________.
My answers are below in bold.
1. I keep hoping I will manage to fit more than 24 hours into a day.
(I could really use a couple or a few more hours per day. I have this problem where I have a great many things I want to accomplish in life, but then I also have this thing called a full-time job that takes most of the waking hours of my day. Don't get me wrong, because I am very grateful to have a steady job and income. Some days it's just a tad bit overwhelming trying to accomplish my personal goals while also juggling my job. That's why I will continue to hunt for extra hours in the day. If I find a few hours to add to the day, I'll let you all know how and where to get them.)
2. Last year at this time, I was doing the same ol' same ol'.
(I'm a creature of habit, and I'm also an asocial homebody, and so most of my days, weeks, months, and years look very similar. That's how much of a stick-in-the-mud I am, and I'm okay with that.)
3. Autumn is my favorite kind of weather.
(We have something like a foot of snow on the ground right now, and the temperatures have been subzero for many days over the past couple of weeks. Believe it or not, I don't hate winter. But, after shoveling snow and then driving and walking through it, as well as feeling frigid even while wearing countless layers of clothing, I'm really just eager for my favorite autumnal weather. I love the crisp yet cozy weather of autumn, when you're neither too hot nor too cold. I'll accept spring, too, but the extreme heat of the upcoming summer isn't my kind of thing, so I would be glad to pass on that.)
4. One random fact I happen to know is that the constellation Orion includes a red star called Betelgeuse.
(Does that star's name not remind anyone else of the movie Beetlejuice? Anyway, I love astronomy. I enjoy it enough that I took a couple of astronomy courses in college, even though astronomy had absolutely nothing to do with my major. What's more, my favorite constellation in the night sky is Orion. When you're looking at the sky, the star that is Orion's left shoulder looks sort of red, and that's the star Betelgeuse. It's red in tone because it's the type of star that's called a red giant, but I won't get into the details of what that means. In addition to Betelgeuse, Orion also includes the star Rigel, which is actually the brightest star in the Orion constellation. Sadly, we're reaching the end of being able to see Orion in the Northern Hemisphere, at least until November. It's visible in the sky from roughly November to February, and I always feel sad to see it go this time of year. If you're not into astronomy, you are probably bored to death right now. My apologies.)
Now it's your turn!
To add your link to the Friendly Fill-Ins Linky list, just click HERE!
You can also click on the badge below to add your link.

Now, are you ready for your Eddy fix? Believe it or not, Eddy still has a photo or two to share from her relatively recent open window photo shoot. Remember the photo shoot we told you occurred with an open window on a cold winter day, because that's what it takes to distract Eddy for photos? Anyway, in today's photo, Eddy wants you all to see how she loves watching the birds in the trees and sky. 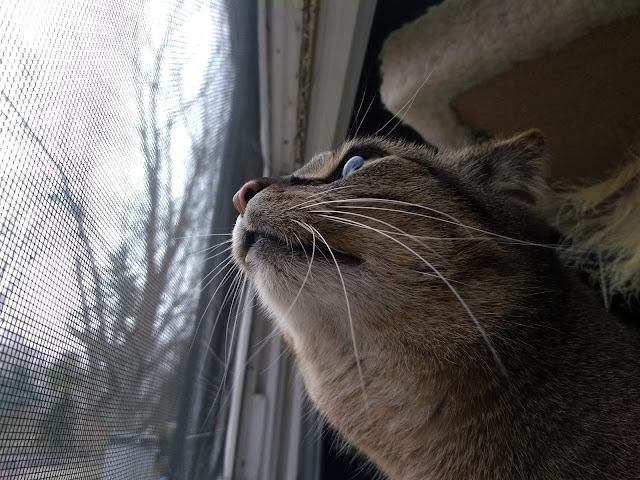 Sometimes, Eddy talks to birds in that adorable chirping-cackling way cats do. I just love when kitties do that.
Happy Friday, friends!
***
Flashback Doodle of the Day
Today we have for you another flashback doodle from last year's dark winter series we shared. We've also been sharing a new series inspired by this one. Tomorrow's doodle will be in honor of pup Astrid's birthday, but after that we'll be back to the spooky winter doodles. Anyway, here's one for today, and apparently it's one I got a bit witchy with. 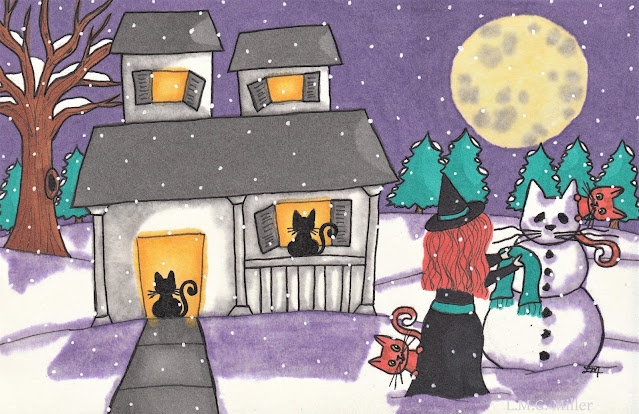 ***
Tip of the Day
Today's National Cat Health Care Month tip is all about those litter boxes. Especially if you have multiple cats, make sure that you have enough litter boxes with regard to the number of kitties in the home. It is often recommended that you have as many litter as you have cats, plus one. If there are not enough litter boxes, it is possible that cats might quickly find the litter boxes too filled or dirty, or that there might even be some bullying or battles over use of litter boxes. This could lead some cats to have to hold onto their urine or stool, which in turn could lead to issues such as UTIs or constipation. Or, some cats might simply begin looking for other areas in the house to urinate or defecate outside of the box.
Other litter box issues that might lead to health concerns or unwanted behaviors include litter boxes that are not cleaned enough, litter boxes that are in an area that is too high traffic for some cats' preference, litter boxes that are hidden too far away for certain cats' liking, or litter boxes that contain a type of litter that certain cats simply do not prefer. Obviously, issues such as holding urine or stool, resulting UTIs and constipation, and out-of-box urination and defecation are not ideal. For these reasons, do be sure that the litter box situation is suitable for all cats in the house, so that all the kitties involved can stay as happy and healthy as possible.
Posted by The Menagerie Mom at 12:00 AM

Super interesting filling in this week AND we also love the flashback Halloween doodle!!

What a magnificent Eddy Open Window photo! Talk about up close and in person. Stay warm and enjoy the weekend, y'all.

Great answers and great picture of Eddy. So cute!

Love seeing Eddy and a Dark Doodle is always welcome. Dad says that fitting more hours in a day is something he tried for years. Now he is retired... somedays he still feels that way.

We love autumn too and those Eddy whiskers are amazing!

Great answers. Good luck finding some extra hours, they will have to come out of sleep.
I did not know that about Orion. My hubby is big into space, I am surprised he never told me that. Nice whiskers Eddy. And I love the drawing, snow and a bit of Halloween are just my thing. Great tips too. I think I am one litter box short. :) Have a nice weekend. XO

Love your fill-ins and thank you for co-hosting the fun. I look forward to the fill-ins each week.

Eddy is getting some fresh air and can talk to the birds too. Adorable.

Have a fabulous day and and weekend. ♥

That doodle is too cute! Lately if Mudpie isn't in a cuddling mood and I want her to cuddle, I open the bathroom window so she jumps in and gets cold enough she wants to cuddle! Aren't I a bad mom? MOL

I took a couple of astronomy classes in college too, and boy, were they FUN!
Orion is very cool, and I like the Pleiades.
Someday, I'd like to go below the equator to see a whole new sky's worth of constellations.

Pawesome fill-ins and definitely #1, trying to find more time to do everything is hard, the P.A. is constantly chasing more of it too! MOL

Thanks for hosting and Happy Sunday guys xx

If we tried to cram everything into a day the experts tell us we should be doing (exercise, sleep, plus our work and everything else) we'd all need 40 hour days. If you find a way to expand yours, even a bit, let me in on the secret.

Hi Eddy! TW and now Pop have a job called sleep. If they woke up at a decent hour, they could accomplish something.