We're feeling poetic today, just like we do every Thursday thanks to Angel Sammy's Thoroughly Poetic Thursday challenge.

Every week, our host shares a photo prompt to help guide us. This week's prompt is this intriguing image here: 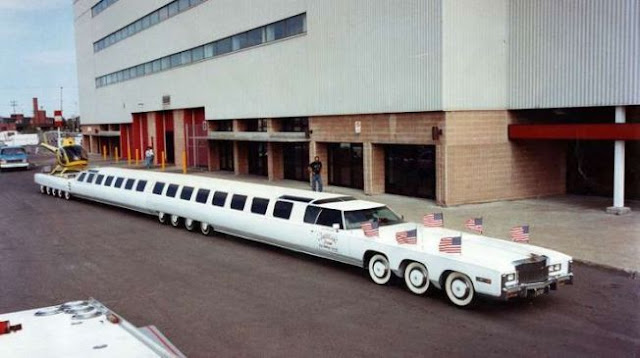 I can tell that is some sort of wild limousine, at least I think. Truth be told, though, when I first saw that image, it immediately made me think of a bullet train. So, I went with that literal train of thought, also decided to turn the idea a bit wintry, and then ended up with the silly, weird, and wacky rhyme below. My poem this week makes little to no sense, but what's new.
Snow Day
Rosie and Sammy were two cool cats.
They were too cool for school, and that's a fact.
That's why the two wanted the day off of school.
They wanted a day to be free and to stay cool.

This all began one night in the season of winter.
There was no snow, though, even with cold air that did blister.
"We need some snow," Sammy said.
The two of them stood, thinking, nodding their heads.
Rosie stated, "Indeed. A snow day is exactly what we need."

The two cool cats stood outside and looked to the sky.
Sammy asked, "Do wishes upon stars come true, or is that a lie?"
Rosie shrugged, saying, "Surely it couldn't hurt to give it a try."
And so the two wished upon the stars, including one that flew by.

The two cool cats began walking back home.
As they did, Sammy said, "Maybe we'll wake up to a world full of snow.
Maybe we'll get that snow day, you just never know."
Before they made it far,
They heard something much louder than a car.

There was a chugging and a choo-chooing.
The two cool cats turned around and did not believe what they were viewing.
It was a train, somehow running without railroad tracks.
What's more, snow fell around it, and on the ground snow began to pack.
The cars of the train were already filled with piles of a snow, if you can believe that.
One of the cars even boasted a snow figure built to look like one cool cat.

The conductor leaned out of the window of the train's pilot car.
"Hello to you!" he shouted, his voice reaching near and far.
The conductor wore a spiffy hat,
And to Rosie and Sammy he also looked like a cool cat.

The conductor again spoke to speechless Rosie and Sammy.
He asked, "Were you two the ones who summoned me?
After all, I got an urgent call about a snow day request,
And so of course I headed this way with the Snow Day Express."

As Rosie and Sammy stood watching the air and ground fill with snow,
The conductor said, "I just need confirmation of delivery before I go.
Would you mind signing this here delivery form?
Then I'll leave you to enjoy your snow day, hopefully while staying warm."
It was Rosie who managed to budge from where she stood like a statue.
She signed the delivery form, just as the Snow Day Express conductor asked them to do.

The snow continued to fall, fall, and fall.
It was already beginning to cover the world in a white blanket quite tall.
Smiling at the sight, the conductor waved and said, "Happy snow day to you!"
And then the Snow Day Express chugged away, while around it snow swirled and flew.

Shocked, Rosie and Sammy went home home and did their best to doze.
The next morning, the two cool cats woke up to the news that their school was closed.
Rosie and Sammy jumped and cheered before bundling up to go play in the snow.
Over an entire foot of the fluffy white stuff had fallen,
And from the sky it was still floating and falling.

The two were amazed that their wish had been granted,
And to have learned of the Snow Day Express, which surely was enchanted.
They kept the idea of the magical train in the back of their minds.
After all, the two cool cats would surely want another snow day sometime. 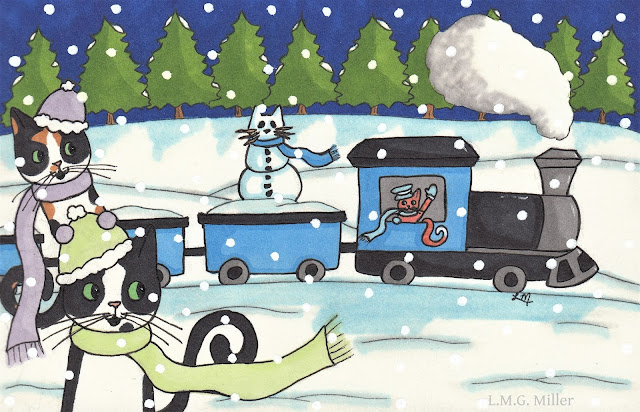 For anyone who might not know, Rosie and Sammy were my childhood kitties, and they were also littermates. Sammy sadly only lived to 5 years of age and passed away when I was 9 years old, but Rosie lived to 21 years of age and was with me until I was 26 years old. The two of them spent many snow days at home with me, so it only felt right to let them star in this random snow day sort of poem.
***
Now we're happy to participate in Brian's Thankful Thursday Blog Hop.

As always, Thimble the adorable tabby is here to give some thanks. And today, Thimble is grateful that she's adorable even when distracted. See? 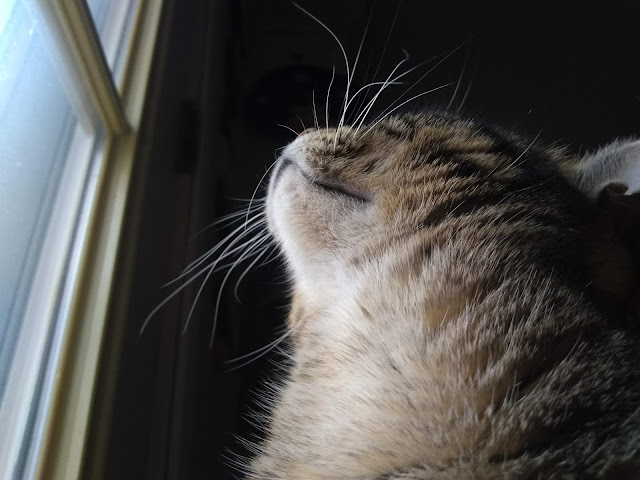 We'll see you tomorrow, friends!
***
Tip of the Day
Today's National Cat Health Month tip is one we already gave recently, but that we'll repeat yet again because it can be very important for your kitty's health. And this tip is to keep up with those preventatives. Typically recommended for monthly administration, different forms of prevention can, of course, prevent a variety of health concerns. For example, flea prevention can help keep your kitty free from flea infestations, flea bites and related dermatitis, bloodborne diseases that can be contracted from fleas, and other issues that arise from a kitty having fleas. Especially depending on your cat's lifestyle, such as if they go outdoors, administering prevention for parasites such as tapeworms and roundworms can also be beneficial. If infested, various intestinal worms can lead to issues such as diarrhea and weight loss, among others. Also don't forget the concern of heartworms, which can stem from mosquitoes. Heartworms can be a very dangerous parasite that can affect the heart and lungs, so preventing this is of course something significant to consider. Prevention is something to always consider for keeping your kitty happy and healthy. That being said, do always still discuss this with your veterinarian, who can help you determine your kitty's risk for certain parasites, and which preventatives might be best or safest for your kitty.
Posted by The Menagerie Mom at 7:44 AM

I love the poem, and the doodle is just to darling. Thimble, you are gorgeous from any angle sweet girl.

That's quite the fun poem and yes, we agree, thimble is totally adorable! Thanks for joining our Thankful Thursday Blog Hop!

A terrific show of whiskerage, Thimble!
Wish I could get a snow day, but as I'm working from home...*sigh*

Your poem and doodle are terrific! And Thimble looks wonderful! Have a marvellous day!

Thimble, you're always a little doll! What a strange vehicle! Delightful poem and doodle as always :)

Super poem.....that limo could easily have been a train and what a ride it would have been. The doodle is also purrrrfection! Thanks for the story-poem for the wacky photo this week. We bet you are looking forward to next week's story as the photo is just begging for a good tale!

Sorry I am a day late. Excellent poem! I like that you featured Angels Rosie and Sammy. The drawing is cute too. Nice shot of Thimble and excellent tips.