It's Thursday and we're here to rhyme, which is easy to do thanks to Angel Sammy's Thoroughly Poetic Thursday challenge.

As always, our host shared a photo prompt to guide our poetic endeavors. And this week's prompt is this mesmerizing image here: 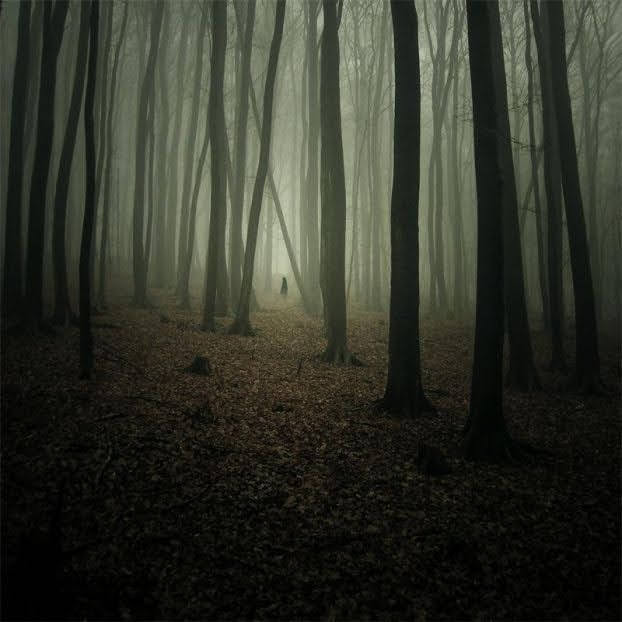 I love this type of imagery. It's not only a forest, which I already adore, but it's also dark, spooky, a bit macabre, and I love it. That being said, I wanted to try to make my poem and its illustration fit into the dark and sort of spooky winter series of doodles I've been working on. So, I used this dark forest imagery, turned it wintry, and ended up with this:

The Figure in the Forest

Kitty and Cat wished to go on a hike on one moonlit night.
The ground was covered in snow, which they actually did like.
They also quite liked taking a journey through the forest.
Most called the forest spooky, but for Kitty and Cat that made it far from boring.

Ready for their adventure,
Into the snowy forest Kitty and Cat did venture.
Unlike their neighbors far and near,
Kitty and Cat quite enjoyed the forest's spooky atmosphere.

The trees all around cast tall shadows in the snow,
Which swayed and danced as the wind swept them to and fro.
None of the shadows alarmed Kitty and Cat.
That is, until they caught sight of something that did not match.

There was suddenly a long shadow that belonged to no tree.
There was something strange that Kitty and Cat then did see.
Up ahead, there was a figure in the forest,
And the two hoped it was not a thing of horror.

Kitty and Cat ducked behind some trees,
Cautiously peering out to see what they could see.
The strange figure in the forest did not move.
It just stood there, standing in the snow like a statue.

Finally, Kitty and Cat realized they could not hide forever,
And so out from behind their trees they did endeavor.
Tiptoeing closer to the figure,
The two could not help but shiver.

As they approached, the figure in the forest remained still.
Moving toward it took all of Kitty and Cat's courage and will.
When they were within a couple yards of the figure,
The two suddenly felt like they were looking in a mirror.

Laughing, Kitty said,
"Why on earth were we filled with such dread?"
Cat at first could only chuckle and smile,
Then she replied, "This is not a thing of evil, not even a statue.
It's just a figure built out of a snow, and it even looks like me and you!" 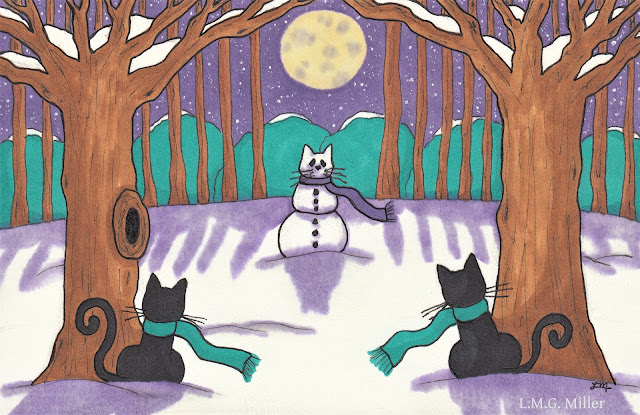 As always, Thimble is here to give some thanks. And today, Thimble is grateful for sunshine, whenever we manage to get it these days. 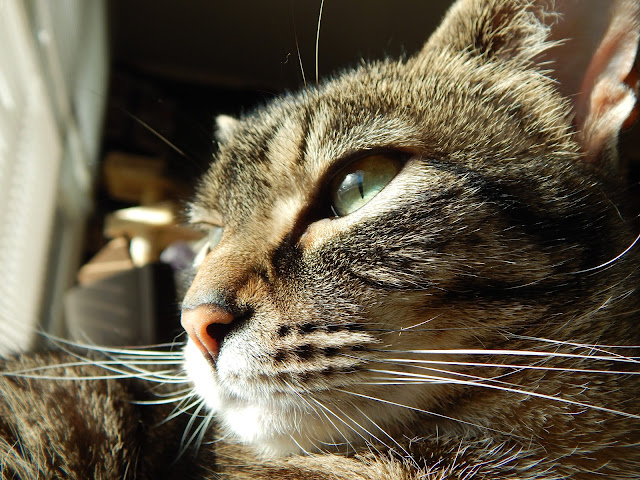 Are you friends of ours getting sunshine? Even a little bit of it? We hope you are, and we're sending you warm wishes!

We'll see you tomorrow, friends!
***
Tip of the Day

We're still not done with tips for National Cat Health Care Month. Today, we're here to remind you to regularly groom your kitty. Brushing your cat has many benefits, such as removing hair that might otherwise lead to hairballs. Hairballs can not only potentially cause vomiting, but also, in some cases, intestinal blockages, which is certainly something no one wants. In addition, brushing can of course also help prevent painful mats, or remove those that are forming. A well-groomed kitty is a happy and healthy kitty, so keep that brush handy. Regular nail trims would also come into play in this topic of regularly grooming your kitty. Of course, if your kitty does not allow for you to brush him or her or trim his or her nails, then perhaps consider a professional groomer, or asking your veterinarian if they offer grooming services. This is especially important for kitties with issues such as mats or painfully long nails that need addressed.

While we're on this topic, remember that cats are both physically and behaviorally equipped to bathe themselves. Therefore, unless your kitty becomes unusually dirty or for some reason is in dire need of a full bath, putting your kitty in that bathtub for a scrub down is not generally necessary. In fact, bathing your kitty could even lead to dry skin or fur, which is of course not ideal for their comfort or health. So, unless a bath is absolutely called for, leave the regular grooming to brushing, nails trims, and other such tasks that will keep your stay kitty sleek, shiny, healthy, and happy.

That was great! I like the drawing too. And Thimble is always adorable. Great tips too. I need to brush my cats more often.

Well you said when we posted Sammy's photo choice for this week that you liked it - and you must have because your story-poem is fantastic as is the doodle!

That poem has a wonderful twist at the end!