Yesterday Evan showed off his toesies. Calico Tonks didn't want to be left out, so now here are her toe beans for your enjoyment. 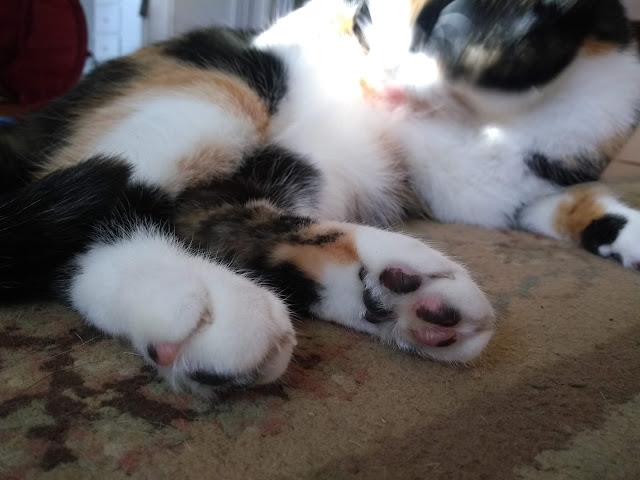 Tonks apologizes that her face is a blur in the background there. This here human quite rudely failed to wait for her to finish bathing her pretty little self before photographing those toesies.

Have a terrific Tuesday, friends!

***
Flashback Doodle of the Day
As we mentioned yesterday, we're sharing flashback doodles this week. This is in no small part because April was extra busy with things like the A to Z Challenge, and so now I'm taking some time to more leisurely scribble up some new doodles. A good chunk of the flashback doodles this week will be from last year's April A to Z Challenge, during which calico angel Rosie was a master chef creating tasty goods at her restaurant. Today we're taking you back to the French toast she served. 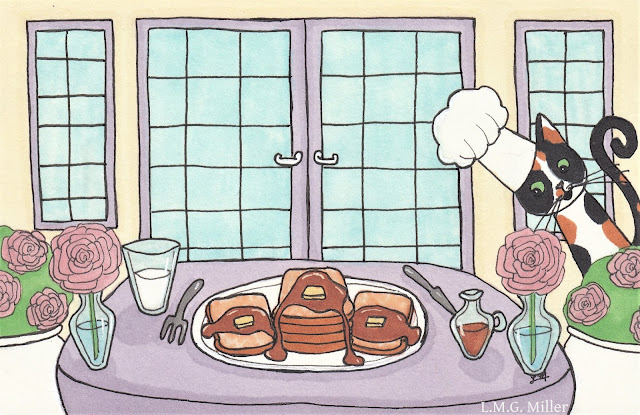 And, there is one last note for pup parents. Though there is a more successful heartworm treatment for dogs, heartworm disease can cause permanent damage. This can lead to lifelong issues, such as of the heart and lungs, even after the heartworms are eradicated. For this reason, heartworm prevention is of course also recommended for dogs.

Posted by The Menagerie Mom at 3:59 AM

I like the mixed colors of your toebeans, Tonks. ~Ernie

Tonks, all parts of your are adorable!

Tonks we love those great toesies of yours

Tonks is a cutie. I love the flashback. Heartworms are so awful.

Tonks! your toe beans are multi colored! I, Marv, have only ever seen black and pink ones! You look marvellous darling (and we love the doodle too)