When my mancat Evan was still a semi-feral kitten, and for months after I brought him home, he was practically unphotographable. At the mere sight of a camera, and most especially when it would flash, he would often go just a tad bit crazy. Sometimes his teeth and claws would make an appearance, and other times he would just walk the other way. 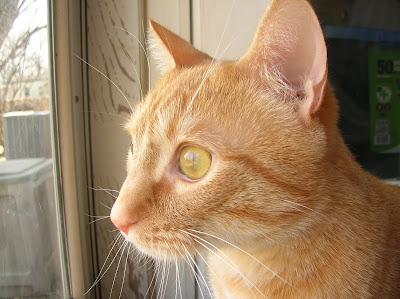 I can now easily say that my boy Evan is my most easy furbaby to photograph. He loves to pose for the camera, and so I rarely have to beg him to sit still. 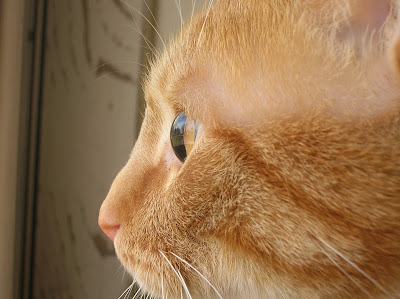 Although I'm the farthest thing from a professional photographer with any knowledge on the matter, I would guess that it's Evan's coloring that makes him photograph well in just about any lighting. That, or it's just his rugged good looks. Honestly, I'm leaning toward the latter. 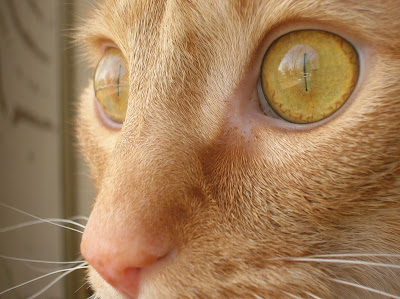 Happy Monday! We hope all of our pals out there have a wonderful start to the week!


***
Our Tip of the Day:
March is Poison Prevention Awareness Month, so how about another tip along these lines? Be cautious if you use medicated topical ointments or creams, as many of these can be toxic to cats and dogs. This can include antibiotic ointments and steroid creams. It is important to especially be cautious if your cat or dog tends to lick your skin, as they can in this way ingest the toxic medications and become sick.
Posted by The Menagerie Mom at 12:15 AM

Evan is a very handsome mancat! In my opinion, orange cats photograph really well - Carmine makes a good cat modle, too. :)
Thank you for the reminder about the medicated creams. I think that's something a lot of people don't think about, and it's definitely important.

Evan is so handsome and he has the loveliest whiskers. We're so glad he has settled in well and enjoys posing for the camera.
Luv Hannah and Lucy xx xx

Evan is a handsome boy. He has such an innocent little face. Great tip about topicals, so many people don't realize how harmful that can be. My hands are dry and cracked because I rarely use lotion because I am afraid to get it on the cats- I know I take it a little too far :)

Oh Evan, you are such a handsome boy and we are so glad that you decided that the camera is an Ok deal. We like seeing pictures of you. You all have a wonderful day.

Even, you are an incredibly handsome man cat! Those are great photos of you!

Evan is a beauty!! I have two gingers myself. :-) So far my boy ginger isn't in to being photographed. He likes to move at the last second. LOL

Evan has such beautiful eyes!

Evan looks like such a sweetheart...and so very photogenic!!!

Evan is a GREAT model! What stunning photos of him today. :)

Those are wonderful photos ! Evan is such a beautiful model ! Purrs