Birthday bash, and all that jazz!

Today is quite the fun, exciting day.

For one, it's National Tabby Day! I was so excited when I found out about this wonderful day, as all three of my feline furbabies are tabbies.

And then of course there's the fact that today is the Caturday Art blog hop, hosted by wonderful Athena Cat Goddess Wise Kitty. My contribution for this always fun hop is at the end of this post.

But, I am most excited today to be celebrating another furbaby birthday at our house! Actually, since none of my furbabies seem to be able to tell me their exact dates of birth, it's yet again more like a "maybe" birthday. That being said, my active little lady Eddy (maybe) turns 1 year old today! 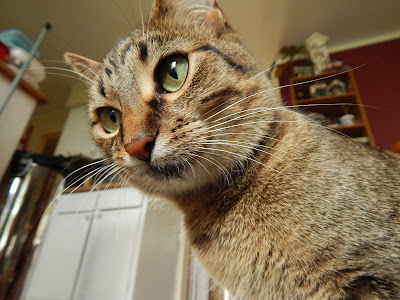 Although all my furbabies are still young and active, Eddy is perhaps my most fun-loving furball. She can turn anything and everything into a toy, and does so frequently. She's clever and innovative and just downright ornery. And, she's adorable, if I do say so myself.

Since Eddy is such a fun-loving little lady, she and I decided that, for her birthday, we'd share some fun facts about her. Some of these are little tidbits that we may have shared before, and some we may not have shared yet, and others we just simply can't remember whether or not we've mentioned in the past. 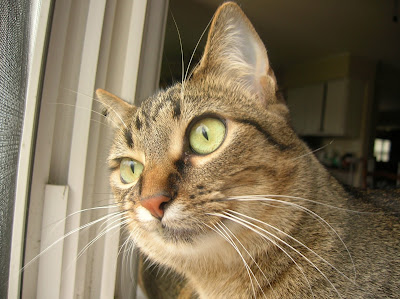 1. Eddy came to me named Daya. I renamed her Eddy because, due to this special needs girl's head tilt, I was told by her rescue group that she tended to spin in circles. An eddy is a whirlpool, and so I named my spinning kitten Eddy. (Eddy still has a head tilt, but she no longer spins in circles.)

2. Prior to deciding on Eddy, I almost named her Dervish. Obviously, though, Eddy won out in the end.

3. Eddy loves her name, especially when it's repeated many times in rapid succession. Calling for Eddy-eddy-eddy-eddy-eddy will bring her running just about every time.

4. Eddy is a mama's girl. She likes this human mama of hers, and that's about it in terms of her preference in humans.

5. Eddy is this mama's only true lap kitty. If I sit down, she'll be in my lap within seconds. Sometimes she thinks of my lap as nothing but a playground, but other times it is the perfect place to curl up and snooze. 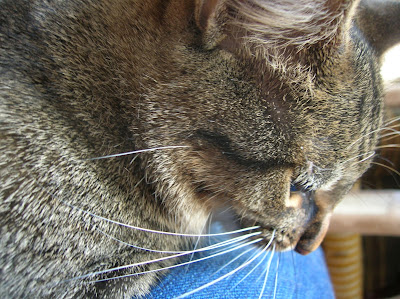 6. Believe it or not, active Eddy is the easiest, most complacent of my furbabies during nail trims. This is because all I have to do is wait for her to fall asleep on my lap, at which point she couldn't care less what I do to her.

7. Eddy is a diehard chaser of toes beneath bed sheets. In between toe hunts, though, she loves sleeping on her mama's legs at night.

8. After arriving at my house as a kitten, Eddy most quickly took to her older sister Thimble. Thimble mostly ignored her, preferring the kitten food over the kitten itself. These days, Thimble and Eddy get along like, well, sisters. 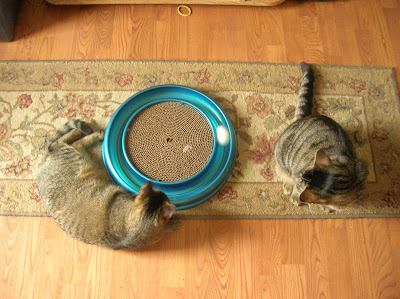 9. Eddy loves to snuggle with her big brother, Evan. He's down with that, most of the time. 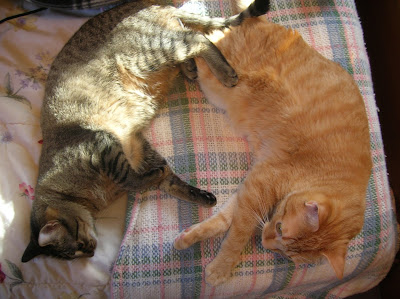 10. Eddy was at first very much against the idea of living with a dog. Over time, though, Eddy has come to regard cat-loving Astrid as a tolerable frenemy. 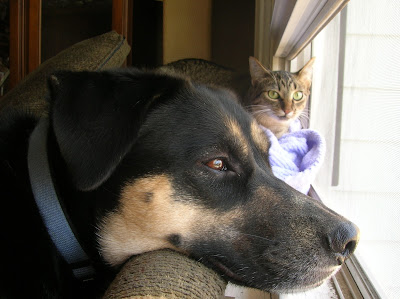 11. As many of our regular readers know, getting a still shot of Eddy is like winning a gold medal at the Olympics. It's a sport, and a hard one to win at that. 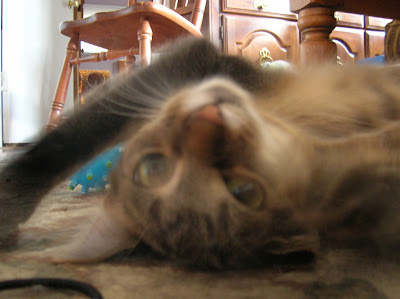 Happy birthday, Eddy! You mama hopes you have lots of extra fun today!

Now, that brings me to our Caturday Art contribution. Today's art is, of course, for my happy-go-lucky birthday girl. She's a tabby, and it's her birthday, so this piece can serve two purposes on this grand day. 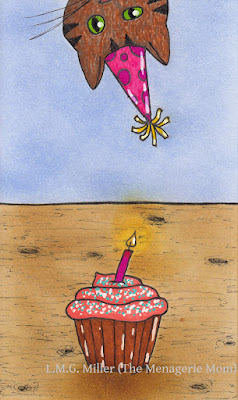 ***
Our Tip of the Day:
If you think it's a fit for you, your family, your schedule, and your finances, please don't rule out special needs animals when considering adopting. Special needs animals are often overlooked by potential adopters, as they are often deemed "imperfect". In some cases, such as when shelters begin to run low on space or resources, this means that these sweet furbabies are euthanized before they ever get the chance to know a life of love. But, these special animals can offer just as much, if not more, love and companionship as any other furbaby. And so, if it seems like a fit for you, please consider saving a life and opening your heart and home to a special needs animal.
Posted by The Menagerie Mom at 12:44 AM

Names should have meaning! And Eddy does. That is so good.

Happy Birthday, Eddy. You are a very special girl. We like your name and how you mom gave it to you and we like open looks with the smile on your face in your pictures. The art is purrfect again. A birthday and a tabby day in one, makes it purrfect. Pawkisses for a Happy Weekend :) <3

Happy Eddy Day ... what a wonderful kittygirl you are, and how lucky your Mom is to have you ... we do enjoyed reading "your story". You are definitely one of a kind!!!

Excellent post. Nice to learn more about adorable Eddy. She sure is a love bug. I love the art you made for her too. And that is a great tip, special needs cats are very sweet. Many of mine are special needs, but it is more mentally than physically aside from Polar Bear who is deaf.

Happy Birthday Eddy! We hope you have a great day!

We love the birthday sketch! Fabulous! :)

It's a good week to have a birthday, says Devi. :)

Happy Purrthday Eddy! furry goods to find out how you gotted your name. We loves your head tilt - makes you looks cute and weze glads you not spin in circles no more... and big dogs can be goods sometimes for friends cause they can purrtect us and day am warm fur cuddling. Happy toe hunting too! Purrz from the Katie Katz.

Happy Birthday, Eddy! I hope your day is extra special. I enjoyed learning more about you!

Happy Birthday Eddy! Happy National Tabby Cat Day!!! Hope you all have a wonderful day celebrating!!!
Marty and the Gang

Happy birthday, sweet Eddy!!! I loved learning more about you and hope you're having the most purrfect day ever!

Happy Birthday, Eddy! Tabbies are very special to us even though we have none as part of our household right now. Or mom admires your mom for having and advocating for special needs kitties. Our mom has never had the opportunity to adopt one. Hope your day is filled with love and treats. As usual, the art is adorable. Our mom sent yours an e-mail a little while ago. XOCK, Lily Olivia, Mauricio, Misty May, Giulietta, Fiona, Astrid, Lisbeth and Calista Jo

A very Happy Birthday to you Eddy. Don't know why we are so late getting here so sure hope you have had a great day. And will have many more coming to you. You sound like you have a great personality.

I love Eddy's name and am glad she found a home with you. Happy Birthday to pretty tabby girl Eddy. TW says I'm s pecial needs kitty cos I'm still part feral and not many families would have kept me around.

We love how Eddy got her name! We also loved learning all those neat things about her. :)

Happy birthday, Eddy. We hope your day is filled with love, and lots of time on Momma's lap! :)

I'm so sorry we're late! We want to wish Miss Eddy a happy belated birthday. Eddy, you're so special. We love reading these things about you. You have fit into your home remarkably well!

I missed your birthday? MOUSES! Well better late than never so... May your birthday be filled with love & cuddles and treats & nip with many more birthdays to come. Purrs, Seville.

I missed your birthday? MOUSES! Well better late than never so... May your birthday be filled with love & cuddles and treats & nip with many more birthdays to come. Purrs, Seville.

Oh no!!! I have missed THREE birthdays this weekend! I am so sorry I missed Eddy's! I was in such a funk from all of the sick kitties around the blog-o-sphere that I spent as little time as possible online. Happy happy belated birthday to Eddy and they story of how you named her was so touching and clever!! xoxo catchatwithcarenandcody