Happy Friday to all of our furiends! It's yet again time for one of the funnest parts of the week, and that's the Friendly Fill-Ins challenge, hosted by the great 15andmeowing and McGuffy's Reader. 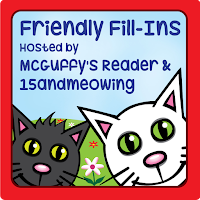 This week, our creative hosts came up with these fill-ins:

And here's what I managed to make of them:
As has become part of our Friday tradition, Eddy will now make her weekly appearance. First and foremost, she would like to share with you a most terrifying thing. You see, long story short, this mom of Eddy's came home from work yesterday only to shove her into a cage and whisk her off to this horrifying V-E-T place. Gasp! 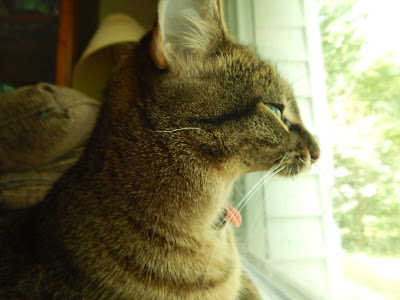 Fear not. All is well, and Eddy was simply due for her annual exam and vaccines

If I'm to be perfectly honest, I truly thought that Eddy was going to be every veterinarian's worst nightmare. She had not been to the V-E-T since her last round of vaccines as a kitten, and all I could imagine was her appointment turning into a scene worthy of any slasher film. Although she loves her some mom cuddles and is my only lap-loving cuddle kitty, this active girl is also my most skittish and feisty, and she is wholeheartedly against fraternizing with any human other than her mom.

That all being said, my girl Eddy was a perfect angel for her V-E-T visit. Sure, she gets completely bent out of shape over going into her carrier, even though that thing is left out and open 24/7, 365 days a year. There was some wailing and much thrashing and flailing right after she was imprisoned in that fiendish box, but past that, this little lady froze like a statue and let those terrifying people in scrubs do whatever they wanted to her.

Eddy made her mom very proud! And, despite her persistent head tilt and facial nerve paralysis, she got an A+ from the doc!

***
Our Tip of the Day:
Some time ago we gave a tip about getting your kitty used to their carrier by leaving it out all the time, and making it a fun place to hang out or nice and quiet place to snooze. Today, we'll give a reminder to make sure that you choose a carrier that works best for your furbaby's particulars. For example, if your kitty is especially large, make sure their carrier accommodates that. On the other hand, if you kitty is small, be sure to get a carrier that is not so big that they wiggle and wobble in an uncomfortable or unruly fashion. Don't only take their physical traits into consideration, though, but also their behaviors. Does your kitty like to scratch, or has he or she shown a tendency for scratching or chewing at the carrier while inside of it? If so, for their own safety, it is perhaps best to not use a mesh or otherwise flimsy carrier for them. And is your furbaby one of those who goes spread eagle as you attempt to get them into the carrier? If so, be sure to take into consideration the size of a carrier's doorway, or get a top-loading carrier with a sufficiently large top entryway. What's more, if your kitty is one of those who doesn't like to come out of the carrier once at their destination (namely, the V-E-T), then, in order to spare them having to be yanked out of the carrier, consider getting one that either has an easy access point or that can be easily taken apart. There are many considerations to make when choosing a carrier for your furbaby. But, since you know your furbaby best, there's no one better for the job than you!
Posted by The Menagerie Mom at 4:42 AM

Those are some great fill ins. Eddy, a lot of times things are so scary at the vets, that we behave ourselves. We are scared not to behave. Glad you had a good visit and that all was good. You all have a great day..

Congratulations on becoming a homeowner! Great answers all around. Hope you have a wonderful weekend.

Thank you for always joining in the fill-ins, you always have excellent answers. That is great that you are a homeowner at such a young age. I think it is nice that you are more old fashioned in your thinking than most people your age. I don't have a smart phone either, mine doesn't even have a camera in it, it is just for emergencies. I prefer my landline- of course, I am old enough to be your mother so I guess my lack of smart phone is no surprise. And YAY for Eddy! I am glad her vet trip went well. I love the photo she chose for today. Great tip too! I have some soft cages and plastic ones, I use the plastic for the kitties that have accidents when traveling. Have a nice weekend!

I'm glad that Eddy's trip to "that place" went well. What a cute photo with her tongue out. I love kitty tongue photos. :)

Time travel would be wonderful. Wouldn't it be great to be able to go back and get the family stories from those ancestors that we never got to know?

We are glad to hear that all went well at the vet for Eddy!

Buying a home can be stressful Building or remodeling a home is also very stressful. Congratulations on having that milestone behind you. Good job, Eddy, for putting up with those people the other day.

You got me on the "boiling an egg". That's kinda funny and something most take for granted. Here lately I've been having a boiled egg for breakfast; mainly to reduce some calories in my day and thankfully I like them cooked this way. Thanks for sharing your fill-ins!

Great fill-ins ! We're glad to hear that everything went well at the vet. Purrs

I love your fill-ins. I can relate to longing for another time. As this world becomes crazier, I truly long for yesteryear. I admit to enjoying social media and some technology, but I'd gladly give it up for a safer era.

I'm so glad Eddy did well at the vet and is healthy!

Pawsome news for Eddy! Mudpie has her yearly coming up later this fall and I'm not looking forward to the experience...

Great fill in answers! And paws up to Eddy for being so good at the vet. Zoey needs to take a lesson from her. ;)

Great answers! And we are so happy that Eddy did so well at the vet, and that she got a clean bill of health! :)

Fiona is mostly afraid of her own shadow and even people she knows, but she always surprises us at the vet. She is very comfortable and a purrfect angel. Must be because she has been going so often. It is good to take your own personal abilities and limitations into account when selecting a carrier. If it seems heavy without your cat in it, consider what it will be like with another 8, 10 or more pounds added. I have a carrier with a shoulder strap and rollers as I cannot mange the big boxy, plastic PTUs. Hugs, Janet

Buying a house is both challenging and rewarding because you can decorate it any way you want and make it feel just like you want home to be! Did you know that grocery stores now have 2 packs and 6 packs of eggs that are already boiled and peeled. They are inexpensive and last in the fridge a long time. I buy them for egg salad or deviled eggs when I am in a hurry! I have a soft-size carrier that the furkids feel much more comfortable in than the hard plastic one with the metal door. They aren't too fond of car-riding though!

This was a really fun post! I used to do something similar when I really didn't have anything going on in my life but still wanted to post something. Not that I think you did that, it's just what I did.

I bought a house several years ago. For a long time I felt like it was my only real accomplishment in life. I love having my own house - I can pretty much do what I want when I want and don't need to get special permission from anyone to have pets.

I don't cook that often, but I do know how to make hard boiled eggs! :)

I love, love, love your answers...as always. I would love to know you better. We seem to think so similarly. I moved so much as a kid, going to 11 schools, that buying a home was essential to my security as an adult. Congratulations to you and your furkids! I especially loved the way you answered #3. I have a smart phone, mainly because my husband is a trucker. It is the best way to communicate with him. We share pictures of things he sees, I send furkids pictures, we share music and critter videos, text, talk...it is just so important. #4, I really do thin that is my super-power. I have a deep connection with critters. I seem to understand them in a special way. I am so grateful, too. Thank you so much for being a part of Friendly Fill-Ins. We could not do it without special people like you! Hugs.
Annie at ~McGuffy's Reader~