As you all have probably noticed, we are all ready for Christmas around here. Our Christmas trees are up (much to Eddy's delight), and our halls are decked. This year, we also took our festivities one step further. 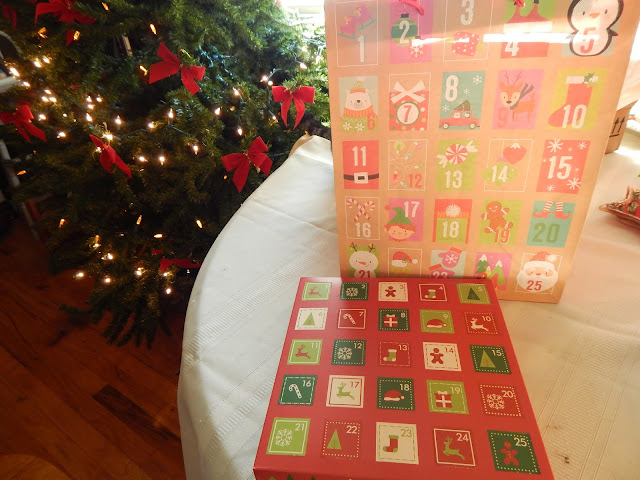 What are those, you ask? They're our furbaby Advent calendars!

Alas, this was far more difficult than I thought it would be. The Advent calendar I saw online was one from the UK. Advent calendars for furbabies must be far more popular there, as I found plenty of vendors who sold only to the UK, but scarcely any in the US. Those I found in the UK do not ship to the US, though understandably so, as food items are often involved in the calendars. Finally, though, thanks to Etsy, I did find a shop called MeatloafsKitchen, which sells an Advent calendar for pups just like that for which I was searching. (This is not a sponsored or affiliate post, we are simply sharing an Etsy shop that made Astrid's day!)

Let me tell you, though, unless I'm looking in all the wrong places, kitty Advent calendars seem to be nonexistent. So, I set out to create my own version. I'll begin by saying that since only about 25-50% of the kitties around here eat treats on a good day, I decided to instead fill our feline Advent calendar with other little goodies, such as toys and niptastic paraphernalia. That probably sounds like overkill, but we have already decided that both before and after Christmas, we will be sorting through our toy baskets and donating toys to shelter and rescue furbabies. 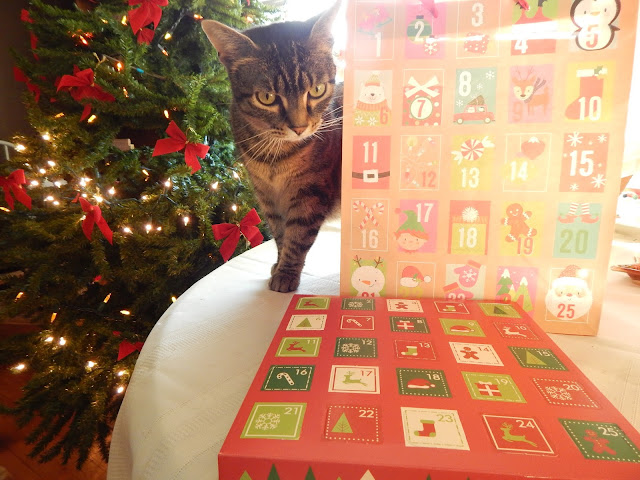 The kitties' Advent calendar is in the form of a numbered gift bag that my sister found at terrific Target. I placed 25 new toys in the bag, and one is pulled out every day. Thimble is the most enthusiastic about the Advent festivities, and she comes running whenever she sees the bag come out to play.

Pup Astrid's Advent calendar is the one lying down in the photos above. It is very much like a traditional Advent calendar you buy that contains chocolates. It is a box with 25 little doors, behind which lie some seriously adorable dog treats. 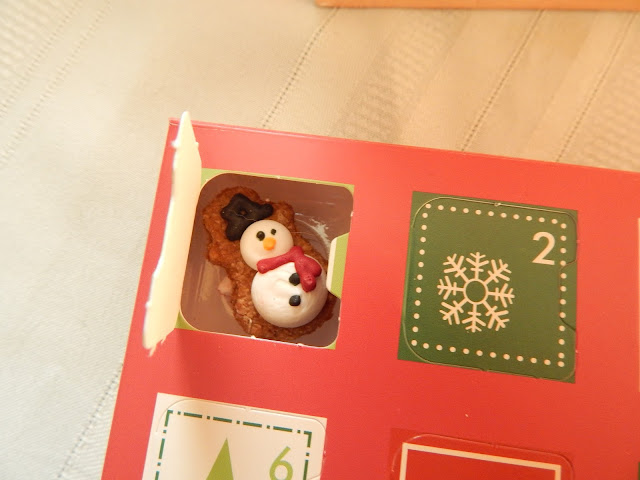 This pup also now knows the sight and sound of her own Advent calendar. Needless to say, both Astrid's and the kitties' calendars have to go into hiding in between uses. 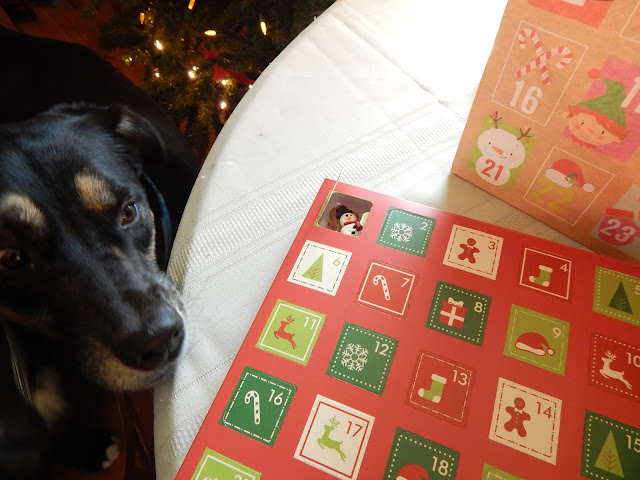 We hope all of you friends of ours are having a fun and festive week!

We are continuing with our doodles in honor of furbabies we feel often get less attention than they deserve. So far, we have done a Ten Days of Tortie series in honor of lovely torties, a Tails of Tiny Tim series in honor of specially abled furbabies, and now we are moving on to our Black Cat Christmas series. 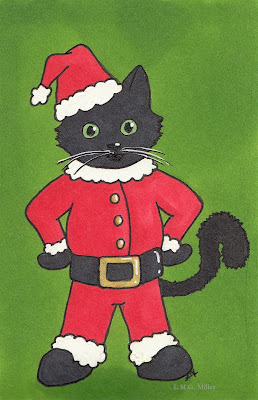 ***
Our Tip of the Day:
Our second tip relating to heartworms is to know the potential symptoms. Since heartworms can affect the heart and lungs, early symptoms can often resemble those of asthma. Coughing and a lack of desire or an inability to exercise are commonly seen. Other potential signs of heartworm disease include decreased appetite, weight loss, and vomiting. The more severe the heartworm infection, and the longer it is present, the more pronounced the symptoms may be. Severe cases may also involve fluid buildup in the abdomen, as well as acute symptoms of pulmonary or cardiac failure, often due to heartworms causing a blockage. If you have any concerns that your cat or dog might have heartworms, seek veterinary care as soon as possible.

Our heartworm tips will continue tomorrow, this time with some info on testing for the disease.
Posted by The Menagerie Mom at 12:19 AM

What a great idea! Love it.....and we also loved your other two series - the black cat Christmas one will be just as fabulous......!

That is such a great idea, to have an advent calendar for the kitties. Bet they will enjoy that. Love the black cat doodle. We are big fans of the black cat. Have a wonderful day.

What a fun idea! And a black cat series? You know Ernie loves this!

Growing up, we always had Advent calendars (non-chocolate) - and even then, they were hard to find. My father grew up in a small town in Michigan - and they have a Christmas store open year-round. They claim to be the biggest Christmas store in the world. You can find Advent calendars from them online - though the best selection might be in store (https://www.bronners.com/category/advent-calendars-wreaths.do). I love your ideas though! A kitty can never have too many toys ... nor a dog too many treats ;)

I had the same problem when looking for kitty Advent calendars, they are only in the UK :) I am glad you found one for Astrid and I am most impressed with your idea for the kitties. I LOVE the black cat drawing and that you are doing a series of them. Joanie would like to request a dilute calico series sometime if you ever need an idea :) Excellent tips on heartworm, thank you again for covering this important topic.

That's so cool ! What a lovely idea ! Purrs

You are the best fur mom ever! I saw the UK Advent calendars for cats and thought they were SO adorable. I didn't notice that they didn't ship to the US, but it seems they were extremely pricey though. Love your new Black Cat Christmas theme too!

That advent for pets is AWESOME! And we love, love, love the Black Cat Christmas series (especially Gracie)! :)

Lorianne, sounds as if you need to make Advent Calendars for kitties. Your doodles would be purrfect, and you'd have a huge customer base through the blog and at craft shows. We think that should be your winter project. XOCK, Lily Olivia, Mauricio, Misty May, Giulietta, angel Fiona, Astrid, Lisbeth, Calista Jo, Cooper Murphy and Sawyer