Selfies and the Sad Christmas Tree

My Eddy girl doesn't often get to star in our Sunday Selfies posts. This is probably because she's the queen of blurry bloopers. But guess what? Eddy is indeed starring in our selfies today! Truth be told, these might be bordering on bloopers, as there is some blur factor. To be fair, though, this human here is largely to blame for these selfies' faults. Lining up a shot with appropriate lighting has never been my strong suit, and Eddy is free to blame me in that regard. 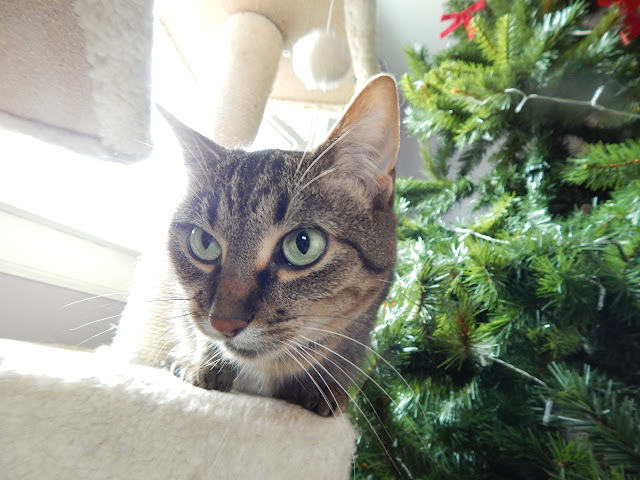 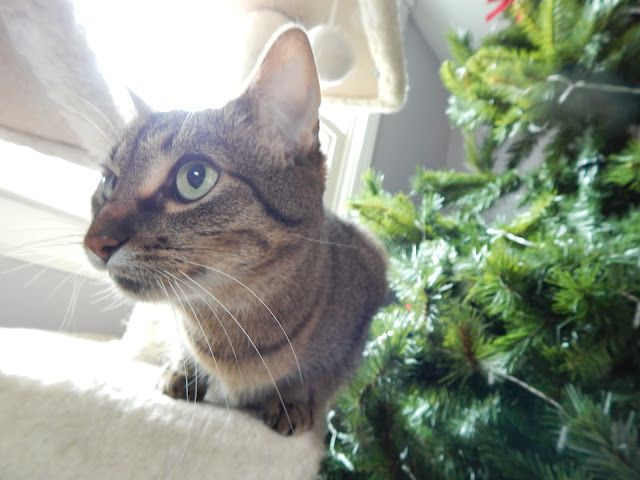 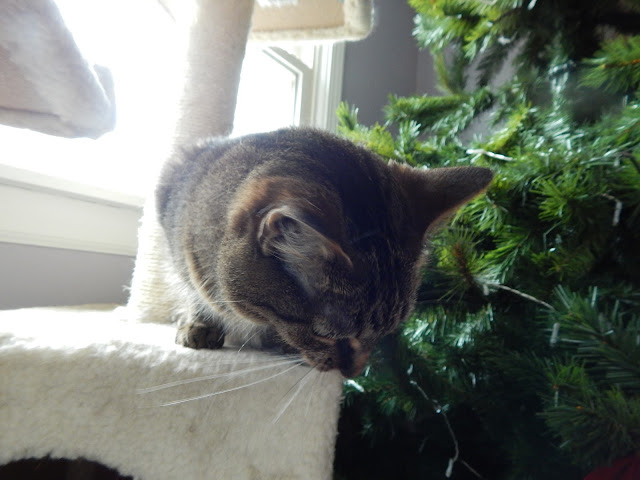 Today's post isn't just about Eddy, though. It's also about that Christmas tree you see behind her in those selfies. Eddy loves to climb that Christmas tree, as we've mentioned before. And Eddy's love for the tree is evident by the tree's sad condition. 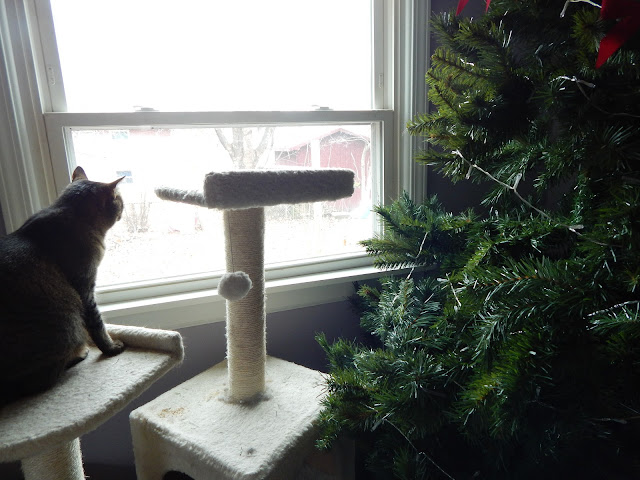 That there shot was taken right after one of Eddy's expeditions into the Christmas tree. As is often the case after one of Eddy's most enthusiastic climbs, a few artificial arboreal limbs were lost in the process. It might be difficult to tell in that photo, but there is a relatively large gap in the tree where a number of branches were removed and thrown to the ground by a certain kitty named Eddy. 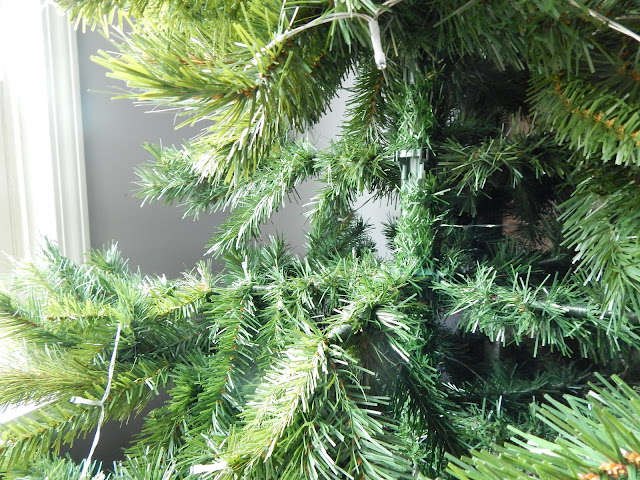 Do you see that gap in the tree? If you look closely, you can even see the empty notches where limbs are missing. This is a very, very common sight in this house. Don't worry, though, this here human crawled around on the floor, collected the limbs, and snapped them all back into place. Who would have thought a Christmas tree could provide such a daily workout? But, take my word for it, it can.

It's nearly Christmas, and we hope you're having a festive time of it!

***
Our Festive Doodle of the Day: 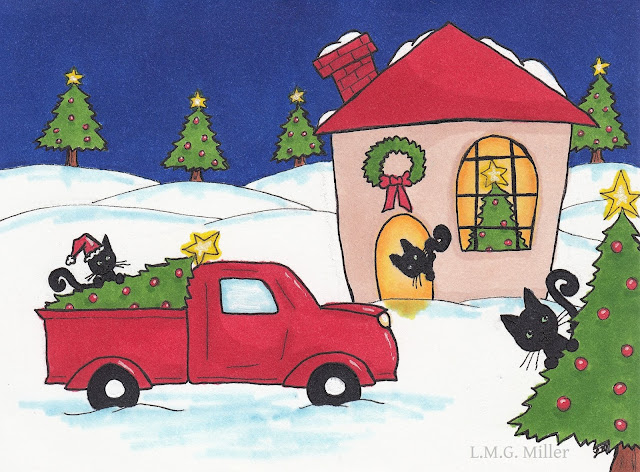 Today's tip relates to the spirit of gift-giving during the holiday season. In particular, we're talking about the practice of giving cats, dogs, and other little critters as gifts on Christmas morning. The important thing here is that anyone giving a furry friend as a gift realize the significance of such a gift. Obviously, a living creature requires proper care and commitment. For this reason, if you or someone you know is intending on giving a cat, dog, or other critter as a gift, be sure that all considerations have been made. Does the recipient want a furry friend? Do finances, time, age, location, and other such factors allow the recipient to properly care for a furry friend? These are just the basics that need to be considered, as cats, dogs, and other animals come with far more factors than this. After all, pets are a commitment that can be with you for many years.

The long and short if it is that while it is wonderful to think of an animal finding a home on Christmas morning, it is still important to ensure that said animal will not end up without proper care, or back at a shelter or abandoned. There are of course times when giving or receiving a cat, dog, or other critter as a gift works out perfectly fine. Such cases might include when a husband or wife gifts a furbaby to their spouse who wants and can care for it, or when a parent knows their child wants and is capable of assisting in the care of a cat, dog, or other pet. If you or someone close to you is planning to surprise someone with a furry friend on Christmas morning, just as with any gift, do take into consideration whether a pet is appropriate for the recipient in question.
Posted by The Menagerie Mom at 6:04 AM

Eddy, we think your selfies are purrfect. Ernie has been known to climb the Christmas tree and has broken a few branches...so much so that last year the peeps had to get a new tree.

Maybe you need two trees, one for the delightful Eddy and one for you guys, too. Or would that just mean double the limbs removed? MOL
Toodle pips and lovely climbing selfie purrs
ERin

Great selfie, Eddy ! We just see a Christmas tree that has been much loved, MOL ! Purrs

Eddy we love your selfies! I love my Christmas tree too and Mom patiently puts it back together for me also. Enjoy!
Luvs
Marty
Pee Ess: Great tip of the day!

Happy Christmas to you all :)

Great selfies, Eddy! Your mom sure is a great sport, making those regular tree repairs. :)

Isn't that what Christmas trees are for? MOL!

Eddy, your selfies are adorable! Christmas is for kitties too so let them have fun with it :)

Eddy is a girl after Ninja's heart. Even though our tree is only 3 feet tall, he has climbed it almost every day. As a matter of fact he has totally destroyed the star at the top from the numerous crashings and Mom has removed all the ornaments except the garland and 3 other stuffies.
Keep up the good work Eddie!
Love the doodle too!
Purrs
MArv

Very cute photos of Eddy. I didn't realize she was that tough on trees :) I like the drawing too. Excellent tips, I agree one should never get a pet for another.

It sounds like Eddy needs an industrial strength tree!

As for the giving a Christmas pet, the best way is to let the recipient open all of the accessories on Christmas Day (everything you will need for the pet in question), then go pick out the actual pet when the shelters open again after the holiday.