Can you believe it's less than a week until Christmas? Isn't that exciting? And perhaps a tad bit nerve-wracking? We still have some things we need to get done around here before the big day itself, but we're still feeling all sorts of merry and bright. Those feelings even infiltrated themselves into our rhyming for the week.

Indeed, we are participating in Angel Sammy and Teddy's Thoroughly Poetic Thursday challenge. Each week, our wonderful hosts offer a photo prompt to get our creative juices flowing. This week's photo is this festive one here:

I have a photo of myself from my youth that is pretty darn similar to this one. Apparently, I found the jolly old St. Nick to be one scary dude. That's actually not the exact direction I took with my poem, though.


Sarah was just like any child.
The thought of meeting Santa Claus made her festive spirit go wild.
That's why she was all sorts of excited when her parents did call,
"Sarah, would you like to go see Santa Claus at the mall?"

The answer to that was nothing if not a no-brainer.
She jumped in the car, where her father served as the chauffeur.
Sarah could barely contain herself.
She hoped to meet Santa, and at least one elf.

The second the car stopped in the mall lot,
Sarah darted inside with a skip, jump, and a hop.
The line may have gone on for miles,
But Sarah remained full of festive smiles.

Finally, Sarah found herself on Santa's lap,
But, good grief, who was that man beneath that red hat?
Actually, was that even a man at all?
Sarah wasn't sure if for help she should call.
After all, this Santa had not only whiskers, but fur.
Truly, he was a great big cat who did purr!


"Oh me, oh my, you've stood in the wrong line.
But don't you worry, it will be just fine."
Those were the words this catty Santa did say.
Then he added, without delay,
"I assume you were looking for Santa Claus,
But now here you are, with Santa Paws.

If you're hoping for a new litter pan,
Then, most assuredly, I am your man.
Well, except that isn't truly true,
And I most certainly don't want to lie to you.
Indeed, I've never met what you'd call a man,
Who has claws like these built into his hands."

This so-called Santa Paws removed his glove from his paw,
Which, indeed, harbored some ever so mighty impressive claws.
Luckily, Santa Paws then put his glove back on,
So that his claws were no longer what he did don.

"You know, though I might not be your man,
Perhaps I can still help you. Yes, perhaps I can."
After saying that, a question Santa Paws then did pose.
"Little girl, what is it that you desire the most?
Something over which you can brag and boast?
Aha! I bet for Christmas you would love a little mouse!
Perhaps one that you can chase and chase around the house?

Hmm, your face tells me that I am way off.
All right, then, would you instead like a hairball over which to cough?
Don't look so alarmed. I see that's not it either.
I take it you also don't want sharp teeth to make you a biter?"

Santa Paws let out a rumbling purr.
He patted Sarah on the head and said to her,
"We'll get this all straightened out,
So don't you cry, and don't you pout."

Santa Paws stood and took Sarah by the hand,
And before she knew it, in front of a door they did stand.
Santa Paws pushed and opened it wide,
And Sarah saw that the Santa she knew was inside.

Sarah did not even have to wait in the line,
For Santa Claus waved her over when he saw her and the festive feline.
"I see we had us a little mix-up," Santa Claus did say.
"That's why Santa Paws and I usually schedule our visits for separate days."

Santa Paws bid Sarah farewell,
After saying that meeting her was really quite swell.
Sarah thought Santa Claus was a right welcome sight,
And the jolly old man said, "I sure hope Santa Paws didn't give you a fright."

Sarah thought long and hard about her reply,
But in the end, she simply could not deny,
"It wasn't so bad, and he was was really quite cute.
You know, I actually learned quite a lot from him, too."
Santa Claus smiled and let out a laugh straight from his belly,
Which, indeed, was very much like a bowl full of jelly.

"Now, Sarah, tell me what you would like for Christmas,"
Santa Claus asked when on his lap Sarah did sit.
Again, Sarah thought long and hard,
Until, finally, she knew what answer she would impart.

"You know, Santa, I think I'd like a cat.
Oh, and I wouldn't mind if he wore your hat."
Then she leaned in close and whispered in his ear,
"I just have a couple of requests, Santa, that I'd like you to hear.
First, can my cat please be friendly to mice?
If he didn't cough up hairballs, that would also be nice.
And there's just one last request, if you might.
I'd like it if my kitty was not one to bite."

After wishing each other their festive goodbyes,
Sarah waved to Santa Claus and retreated outside.
When the little girl was well out of earshot and sight,
A sparkle in Santa's eye did fire up with light.

Santa Claus whispered to an elf who was standing nearby,
"There's something I need you to do, good ol' Clive.
Please run to the animal shelter and grab up Pete.
He's a sweet old cat with little hair and no teeth.
I met him when I was picking up another little boy's new ferret,
And I'm absolutely certain Pete the cat will be perfect for that there Sarah." 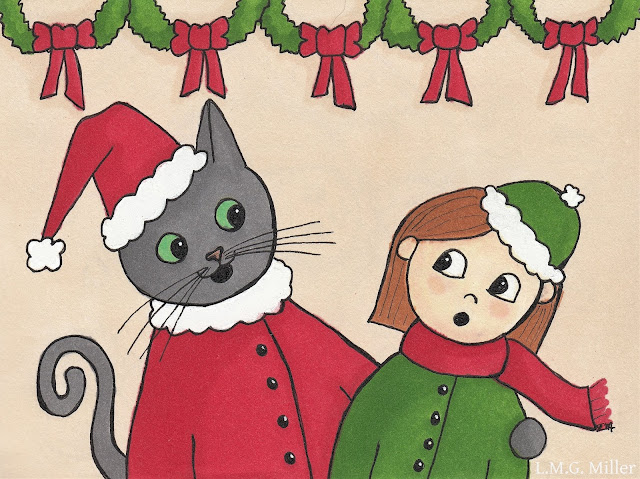 ***
In case you weren't aware, it's Thursday. That means Thimble wants to make an appearance, and she of course has a thankful to share. 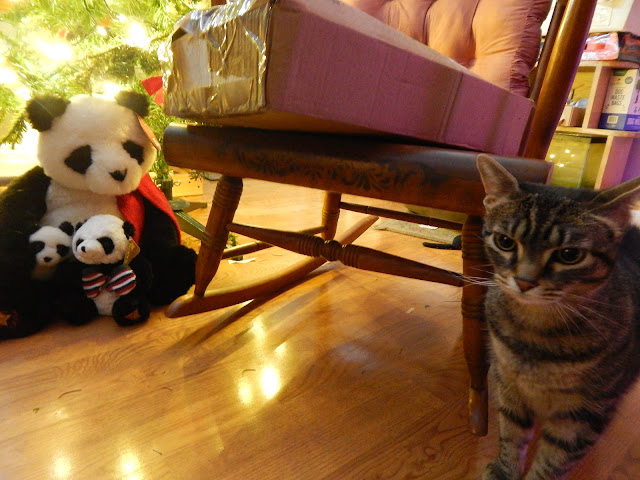 Do you see what's sitting there on our rocking chair? Our postman brought that very recently, and it's from our Secret Santa Paws! 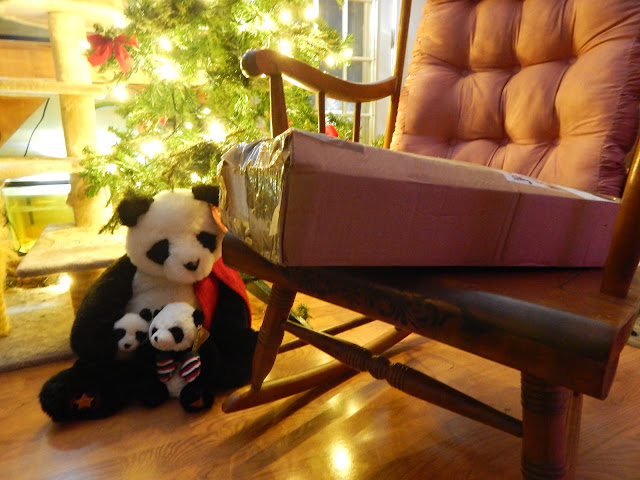 Thimble and all the kitties around here have been quite perturbed with me, as I'm making them wait to open that until a tad bit closer to Christmas. Isn't that so rude of me? Of course, that box has been put into hiding, because, otherwise, curious little paws try to break into it. They must know there are some wonderful goodies in there!

Despite the fact that they're having to wait to open it, Thimble and all of the kitties here, as well as myself, are so very grateful for our Secret Santa Paws, and for the hard work Paula of Sweet Purrfections put into organizing the festive fun that is Secret Santa Paws. Thank you Paula, and thank you to our Secret Santa Paws (whose identity we'll be keeping secret a tad bit longer)!

This time of year, we always reflect on all of the things with which we're blessed. Truth be told, there are too many to count, and for that we are beyond grateful. Of course, the blessings in our life include the friendships we've made through this blog of ours. Thank you, friends, for being our friends! Merry Christmas and many blessings to all of you!

Last but not least, we're here to share with you the fill-in statements for tomorrow's Friendly Fill-Ins challenge. Ellen of 15andmeowing came up with the first two, and I came up with the second two. It's all things Christmas this week!

This festive time of year, our homes are often more likely to be full of potential dangers. After all, we often deck the halls this time of year. Today's tip is to take this into consideration before leaving your furbaby home alone or in any way unattended. Before you leave your furbaby alone, do consider the decorations you have out and what risks they might pose. What's more, especially when your furbaby is left alone or unattended, be sure to make the house a safe place for them to stay. For example, unplug the Christmas tree lights and other similar decorations so that your furbaby cannot harm themselves. Of course, also make sure that no candles are lit when you are not present. Also think about small parts and pieces of decorations, especially if your furbaby is a chewer or is known to eat anything and everything. Move any such decor out of your furbaby's reach when you are not home or able to monitor them. Of course, it is best to always have decor with small or in any way dangerous parts and pieces well out of reach of curious paws and mouths. If need be, simply don't put out such decor in the first place. Or, only put out such decor in rooms or spaces where your furbaby does not have access. Long story short, before you leave your furbaby home alone or otherwise unattended, always be aware of the decor you put out for the holidays and what danger such decor might pose. As needed, when your furbaby is not being monitored, remove, turn off, or in some way render such decor a non-risk.
Posted by The Menagerie Mom at 4:50 AM

Oh what a grand poem you have for this week's photo challenge! We just love it as we always do. Seems wishes DO come true even if there's a bit of confusion along the way. Tee Hee Looks like SECRET PAWS brought you a HUGE and fun-filled package. That's very FUN and I know they will be happy when Christmas morn arrives and the paper is flying!

Hugs, Teddy and Mom Pam too

That was a terrific poem, yours are just the best. I'll bet you'll have some fun with your Secret Paws package too. Thanks for joining the Thankful Thursday Blog Hop!

I want to meet Santa Paws!

Everything is festive and cute, cute, cute today! Purrs and thanks.

Your poems are the very best.

Santa Paws would be wonderful to meet, and i am glad Santa knew about Pete! There, i didn’t mean to rhyme, but it did somehow.

I've made Mudpie wait to open hers too. She's crying cruelty! MOL Your poem is just purrfect. And I think it's depressing that Christmas is nearly over :(

You always have fantastic poems, this one included. Cute photo too. And Thimble is doing a great job guarding the present. I am thankful for your friendship.
Excellent tips too.

Cute poem! I'm glad little Sarah is going to get what she wants most from Santa Claus. :) Merry Christmas & God bless!