Another Thursday has rolled around, and that means we have another rhyme to share. It is, after all, the day of Angel Sammy's Thoroughly Poetic Thursday challenge.

As always, our host shared a photo prompt to guide us as we get poetic. This week's prompt is this intriguing one here:

I'm slightly determined to make every poem this month revolve around Christmas. So, when I saw that incredibly interesting photo above, I did my best to to think of how to make my poem for it a festive one. I don't know how well I achieved the final goal, but here's my attempt:

Laundry day had come again.
Into the wash went the dirty clothes of young Ben.
Wearing his one clean shirt not in the wash,
Ben went outside to play with his cat and dog,
Whose names happened to be Boss and Hogg.

It was a cold December day,
But Ben and his furry friends hardly noticed the cold as they played,
Not even when snowflakes began to fall this way and that way.
The trio hopped and skipped in the snow until Ben's mother they had to obey.
"You three get inside where it's warm!" was what Ben's mother did say.

Though Ben, Boss, and Hogg had great fun frolicking in the snow,
It had most certainly left them all soaked to the bone.
Ben ran to his closet to change into dry clothes,
But he found no dry clothes in there at all, no.
There was a good explanation as to why.
After all, all of his clothes were hanging up to dry.

The house was filled with clothes strung all about.
When it came to dry clothes, Ben would have to go without.
That ended up not being the case, though,
Because Ben's mother saw his plight just so.

"Your clothes are all still too wet to wear," Ben's mother agreed.
Then she added, "But I have a fix for that, indeed."
In the family room stood the Christmas tree.
Beneath it were wrapped presents that numbered three.

"You weren't meant to open these until Christmas," Ben's mother said.
"But," she added, "why don't we open them right now instead."
The three presents were labeled for Ben, Boss, and Hogg,
The boy and his best friends the furry cat and dog.

Ben tore at the paper wrapped around his gift.
Then from the top of the box the lid he did lift.
Inside was something soft and warm.
It was a sweater Ben's mother then insisted he adorn.

Boss and Hogg also had their very own new sweaters.
Ben's mother said, "I made these for you three just for this type of weather.
They'll keep you warm until your other clothes dry.
I knitted them myself, and that's no lie."

If Ben were being honest, he wished to put the sweaters back in the boxes.
They weren't exactly what a boy his age would call awesome.
Ben's sweater was red and on its front quite a design took up the space.
Front and center, his mother had knitted upon it Ben's very own face.
The knitted version of Ben wore a festive hat of green.
That was in fact the case for all three.
Boss and Hogg's furry faces also decorated their new sweaters, indeed.

"You can have these gifts early," Ben's mother said with a smile.
"They'll keep you three warm for a good long while."
Ben could not deny that his mother was right.
The three were all cold and wet and must be quite a sodden sight.

Knowing that his mother had a very good point,
He pulled on the new sweater, and its warmth did not disappoint.
In their new sweaters, Ben, Boss, and Hogg now felt warm and toasty.
Even Ben's cheeks were no longer cold and rosy.

Looking at his best furry friends, Ben let out a smile.
The sweaters were a tad bit ugly, for that there was no denial.
But in their sweaters, Ben, Boss, and Hogg were dry and warmer than warm.
Ben thought that, in truth, perhaps it didn't matter what he wore.
Instead, perhaps the thought of the gift meant far more. 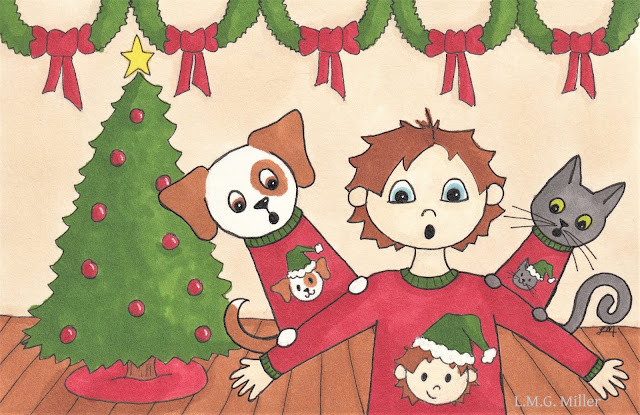 And now we of course have Thimble and her Thankfuls. 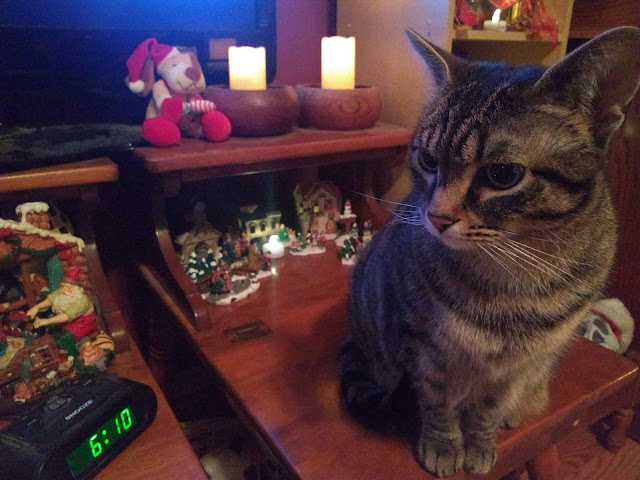 This season, Thimble is so very grateful for her favorite Christmas decorations. This girl especially likes that little Christmas village behind her in that photo above. She was very paws on in helping this mom of hers set it up. She also likes to serve as that little village's very own Catzilla as often as possible.

That all being said, Thimble is not so impressed with some of her mom's decorations. 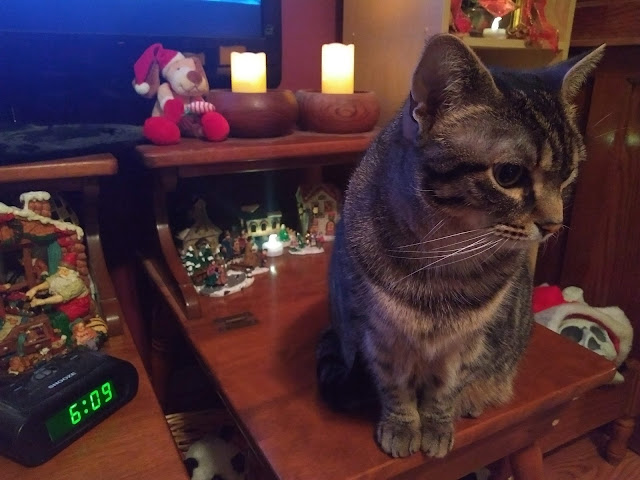 Thimble wants to know if you see that monstrosity down there on the right side of the photo? This here human of hers had so much trouble letting go of Halloween that she kept some of that spooktacular holiday's decor out and then tried to make it work with the Christmas theme. That's why there's a skeleton head wearing a Santa hat in the living room. Thimble is not impressed, and she's even tried to slap that dastardly decor out of the room. Thimble is at least still grateful for all the other decor that is more properly festive, especially when it's the perfect size to slap around.

As always, we're also incredibly thankful for this wonderful community!

Our last Christmas tree tip relates to real trees and how they might affect your furbaby. If you have a real tree, be cautious of letting your kitty or pup drink from any accessible water in the tree stand. It is possible that certain chemicals, such as fertilizers or even pesticides, are used in some tree lots. Some of these chemicals can then end up in the water that the tree is resting in, and this can potentially lead to toxic side effects for your furbaby. Another concern relates to stagnant water in the tree stand, which can harbor potentially harmful bacteria. In addition, be careful of pine needles falling from real trees, and even artificial trees, for that matter. These needles are pointy and sharp, and if consumed this can potentially lead to internal damage. So, keep that tree water covered or somehow out of reach, and keep those fallen pine needles cleaned up, so that your furbaby and the Christmas tree can live in harmony.
Posted by The Menagerie Mom at 5:22 AM

I love the Skelly-Santa! Thimble, you are darling today sweetie.

That was a terrific poem! I love your little village sweet Thimble. Thanks for joining the Thankful Thursday Blog Hop!

Love the poem too. You do these so very well.

I'm all ready for the Friendly Fill-ins tomorrow. Great questions.

Thank you for co-hosting the fun.

Ben's mom is a terrific knitter!

A skeleton head wearing a Santa hat...I love it! Thimble, there's nothing wrong with what your mom is doing...she's just recreating Nightmare Before Christmas!

That was a great poem! You are so clever. I love that you are getting Christmas into all the poems this month. Thimble is a cutie and a good village guard. Excellent tips too. I am glad our tree is fake. I look forward to your fill-in answers tomorrow.

Congratulations on putting a Christmas twist into that very weird photo we had this week for Poetic Thursday! Well done! We think it looks very festive and ready for Santa Paws at your house........

Most children do not think of clothes as a proper present, but in this case, it filled the bill perfectly.

It's a good thing the world is not flat, cats would play with everything and push it all off. Hope Thimble continues to enjoy being Catzilla.