Evan has a few certain spots in the house where he prefers to snooze. One of them is his cube by the back door. 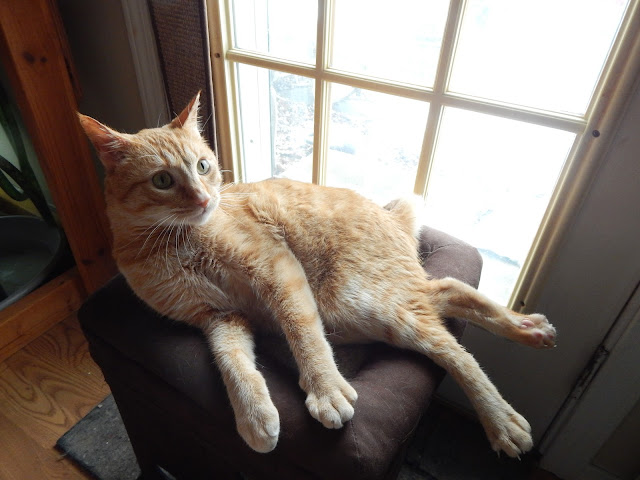 I have no clue why Evan looks so shocked in this photo. Perhaps because I woke him up? That is pretty rude, isn't it?

We're wishing you all a magnificent Monday!

We're in the midst of series of doodles involving gnomes. I've been seeing them everywhere these days, especially in the home decor sections of stores. That more or less explains this doodle, I guess. 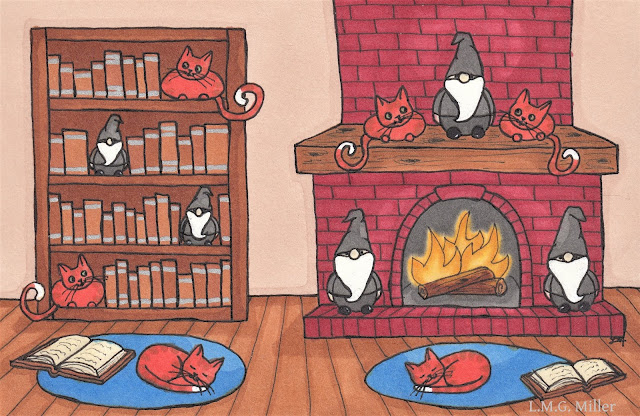 Today, our Spay/Neuter Awareness Month tip is all about behavior. Yesterday we gave some examples of how spaying and neutering can benefit a cat or dog's health, and the same can be said for their behavior. For example, a cat or dog who is not spayed or neutered will often be more inclined to escape outside, such as to run off and find a hot date. Nobody likes the scare of a loose or lost furbaby, and especially not if they come back with news of a surprise pregnancy. So, to reduce any hormonally-induced escapes, of course have your furbabies spayed or neutered. This is not the only behavior affected by hormones and spaying and neutering, though. Cats and dogs who are not spayed or neutered are also often more likely to display aggression, also often due to their hormones. In addition, there is the chance that they will spray or mark their territory, as well as the chance that they will be more vocal and might yowl, such as at windows or doors, especially if they are in estrus and therefore instinctively calling for a mate. These and other potential behavioral concerns can often be reduced or eliminated altogether if a cat or dog is spayed or neutered. So, in case you didn't already have enough good reasons, please spay and neuter your cats and dogs!
Posted by The Menagerie Mom at 6:43 AM

He does look surprised. :)

MOL he sure does look surprised!!

That's a perfect spot to keep an eye on the outside, get some sun when it's available AND be up off the floor where someone just might accidentally bump into him!

Cute Evan, sorry to wake you up sweetie!

Evan is such a cutie. I LOVE the drawing. Gnomes are so cute. Great tips too.

That looks like a perfect place in the sun to have a snooze. You all have a nice day.

Evan that is a great place to watch the world. Dad says we will have gnomes this summer too. We cant wait

They do get shocked when we wake them because they just can't believe our nerve!