Yesterday, which was the Twelfth Day of Christmas, we shared a random assortment of festive photos. Some of the photos we shared showed off the snow we got for the New Year. What we didn't show was this here human's attempt to get photos of some of our outdoor Christmas decorations decked out with the snow. I wanted to get a photo before the snow in front of the decorations was disturbed, but I made the rookie mistake of taking pup Astrid into the yard with me. She was a perfect saboteur, not only disturbing the snow in front of the decorations, but also simply standing in the way. 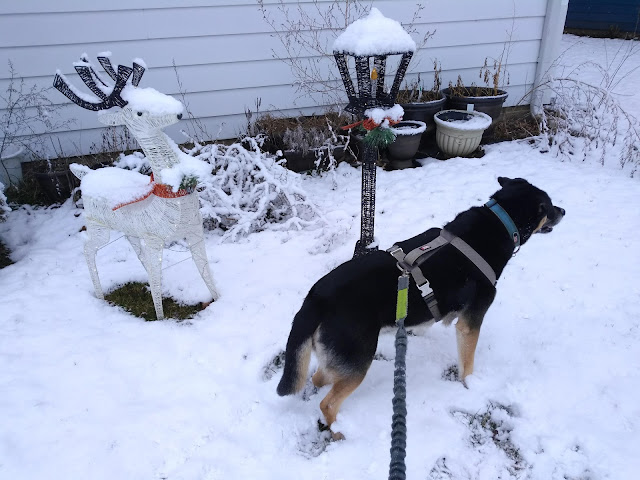 Don't mind all the dead plant material up by the house. Things simply didn't get cut back and taken care of before winter hit. Such is life. Or death, in the case of those poor plants.
This next shot is similar to the one above, except for it better shows off Astrid's shameless smile after sabotaging my attempted photo. 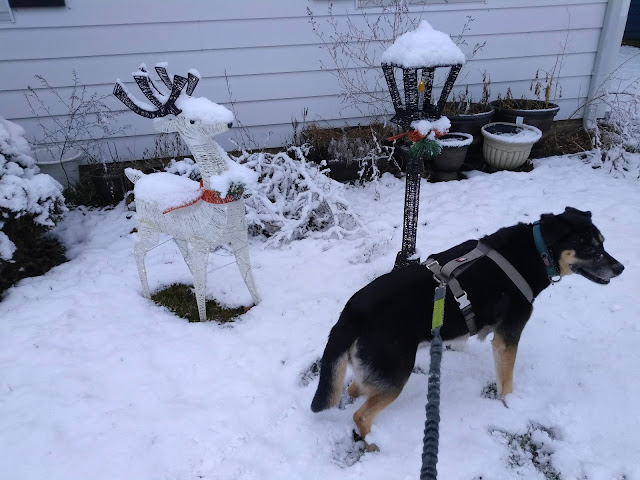 Do you see the snow on Astrid's face? This pup is known to shove her face into snow and throw it around. She also likes to run circles in snow. This dog refuses to walk on dry leaves in the autumn for some reason that makes sense only to her, but she will happily run around and play in cold white stuff. Go figure.
Today's photos as well as our doodle below are still all shades of Christmas. As we mentioned yesterday, even though the Twelve Days of Christmas have now come and gone, today is what is known in Christianity as the Epiphany, or Three Kings Day. This signifies the day when the three kings, also known as the three wise men or the Magi, visited baby Jesus after following the Star of Bethlehem to the location of his birth. The three kings brought baby Jesus gifts of gold, frankincense, and myrrh. In some religions and cultures, gifts are exchanged on this day as a representation of the fact that the three kings gave baby Jesus gifts. I do give my family little gifts on this day, and of course that includes the kitties and pup. This year the kitties get a few more festive toys and pup Astrid gets another one of her favorite and festive dog cookies. 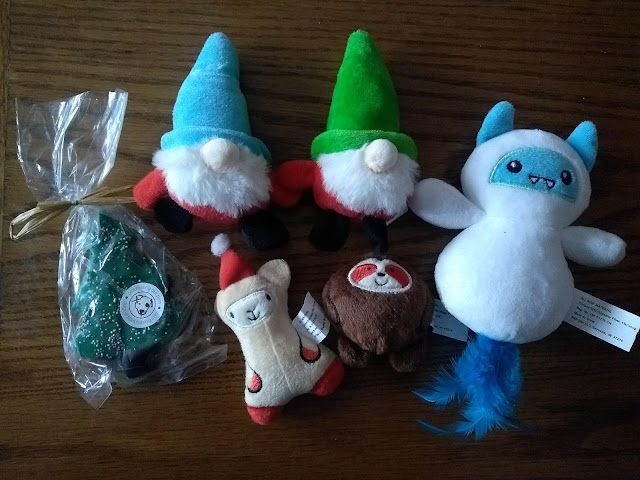 Festive Doodle of the Day

Sadly, we now have our final festive doodle for this Christmas season. That's certainly not to say we won't be sharing many more winter doodles, but this will be the final one for Christmas. That is, until Christmas in July. 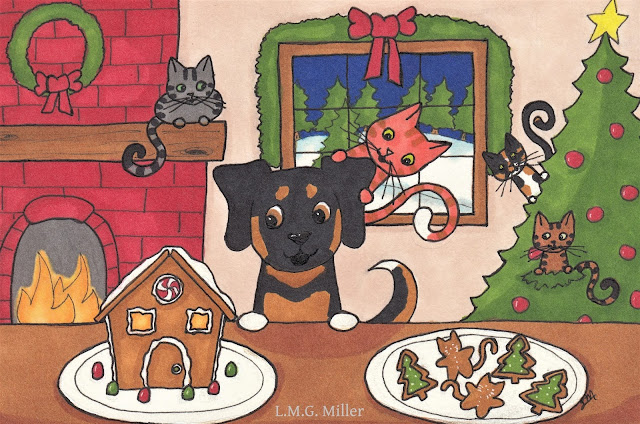 In some cases, outdoor cats just need a little extra help realizing that a shelter is safe and for them. If you have not already done so, put food and treats inside the shelter to tempt feral and other outdoor cats into the shelter. You can perhaps similarly tempt a feral into a shelter with bedding and a heat source, if you have found a workable, safe way to provide that in the shelter. If further tempting is needed in order to get cats into outdoor shelters, you can even try sprinkling some catnip, or silver vine or valerian root, inside in order to entice them.
Posted by The Menagerie Mom at 12:00 AM

Dogs seem to like snow...us cats...not so much. Happy Epiphany!

Hi Guys! Astrid has a gorgeous smile! And we love the cat toys! Happy 3 Kings Day! We are gearing up for Christmas Eve tonight and another Christmas Dinner tomorrow!
Purrs Marv

Happy Epiphany! I undecorated my tree today, debating whether to take off the lights today or wait until tomorrow.

A very happy Three Kings Day and Astrid added to those photos. Love the last doodle and the header

Oh Astrid!
When we first put out the insulated shelter that we'd built, the cats wouldn't use it, even when treats and food were put inside.
Once I filled it with straw, all bets were off, and they've been living in there ever since!

Astrid, you did a great job photo bombing. How sweet of you to give gifts today. I only gave hubby a gift because it is his birthday. Cute drawing. And great tips. Someone I know is feeding 2 ferals that wouldn't get into the houses so I gave her some catnip and they went in when they smelled it.

Thank you for keeping things so festive until today, a Happy Epiphany to you!

Those gifts are so cute! And we loved celebrating the 12 Days of Christmas along with you. :)

Astrid, we love that you enjoy the snow so much.