It's the weekend, which means it's finally time for Athena's Caturday Art Blog Hop.

While I continue to work on scribbling up some new doodles, we're going to yet again share a flashback doodle today. Actually, since it's the day of the Caturday Art Blog Hop, we're going to share a few flashback doodles. This week, we've been going through some of the doodles from last year's April A to Z Challenge, when calico angel Rosie turned herself into a chef, opened up a restaurant, and invited everyone for some tasty treats.
So, for today, flashback Rosie has for everyone a big, full meal. Let's start with appetizers, shall we? 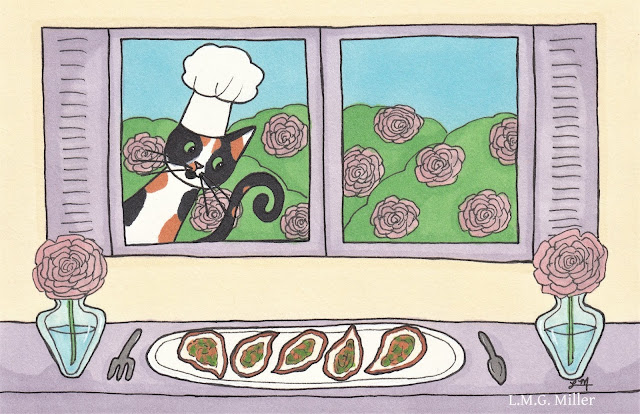 Since some people, like this here human, might not be into oysters, how about a secondary appetizer of nachos? 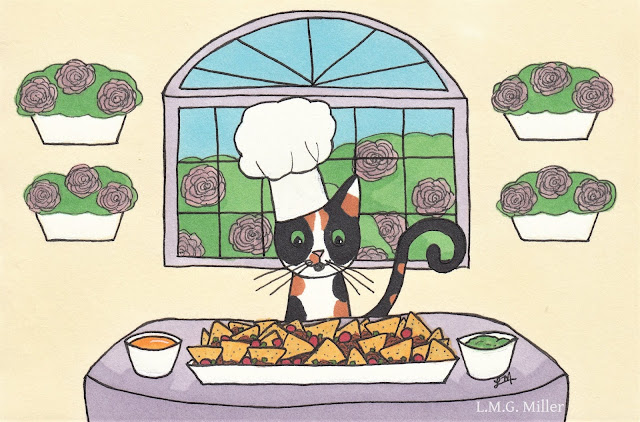 The main course is inspired by some Italian dishes. You know, like lasagna. 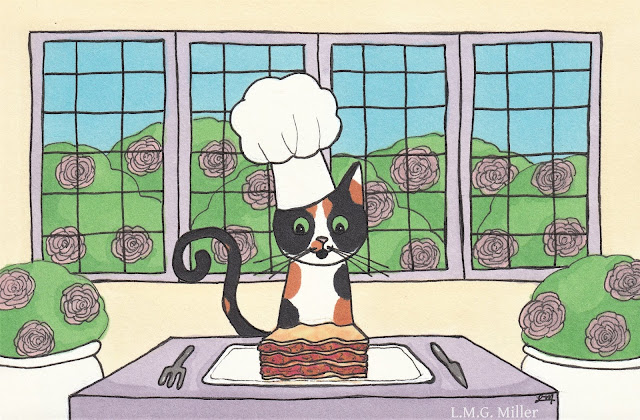 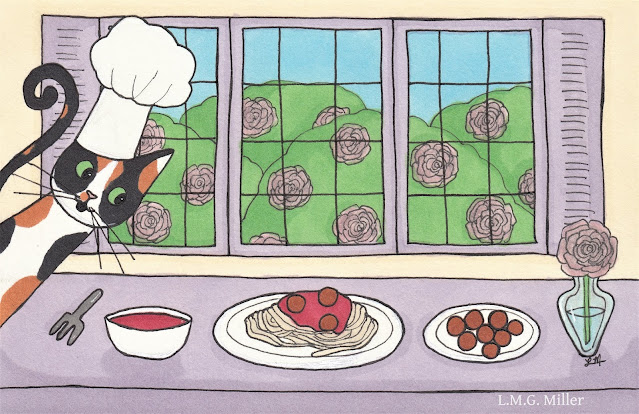 And no meal is complete without dessert, right? First up, Rosie has for you some vanilla cream pie. 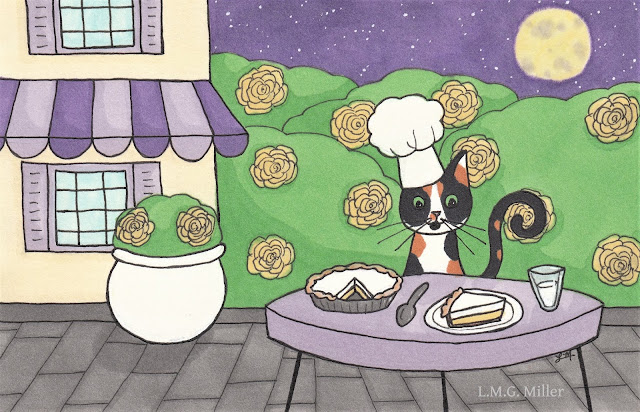 And in case you want to feel a tad bit healthier while eating dessert, Rosie prepared some zucchini bread as well. Of course, feel free to douse it with cream cheese frosting, like this here human does. Because nothing says healthy like a cream cheese overdose. 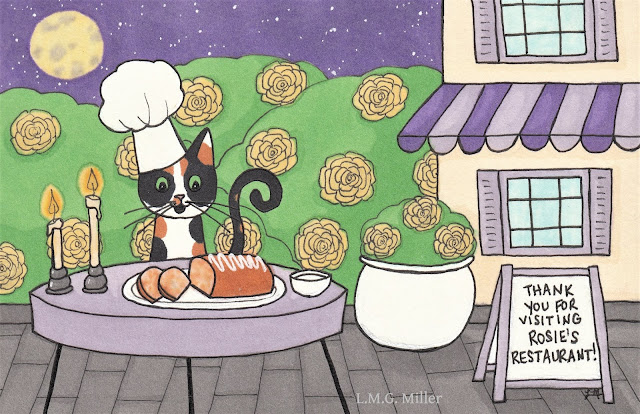 Rosie hopes you're all purrfectly stuffed!

After the recent discussion on tapeworms, we thought we'd briefly discuss a couple of other similar intestinal parasites, these being roundworms, hookworms, and whipworms. We won't go into all of the science for each of these worms, but we will touch on the basics of such infestations. So, if you're interested in these wormy parasites, read on.

Depending on the worm, cats and dogs can potentially become infected with the aforementioned worms as kittens or puppies, such as in utero or from their mother's milk. Worms can also find their way to a cat or dog's intestines by the ingestion of a rodent or other carrier of the parasite, or by ingesting the parasite in certain stages of its life cycle elsewhere in the environment. Symptoms of such an infestation can include diarrhea, vomiting, weight loss, a potbellied appearance, and sometimes even sight of the worms in your furbaby's feces.

If you think your kitty or pup might have intestinal worms, such as if they are a young puppy or kitty with a potbelly, if you see worms in their feces, or if you see any other potential signs, of course take your furbaby and a stool sample to be examined by a veterinarian. Parasiticides can be used to eradicate these intestinal parasites. Just as with tapeworms, though, it is important to use preventative measures to keep your kitty or pup clear of them from then on. Keep their environment clean in order to prevent growth of the worms in the environment. In addition, if your furbaby goes outdoors, monitor them and try to ensure that they are not ingesting prey that are potential carriers of intestinal parasites, such as rodents. If needed, such as if your cat or dog is largely outdoors, discuss with your veterinarian the potential for keeping your furbaby on regular preventatives that cover intestinal parasites such as roundworms, hookworms, and whipworms.

Posted by The Menagerie Mom at 1:10 AM

We think we saw a plate of meatballs. Can we have one of those please?

Rosie is so happy in your drawings; they are all delightful!

I will take a little of everything except the oysters. :) Very cute drawings and great tips.

All that food made me hungry! ~Ernie

I'll take everything but the oysters, please!

As always, Rosie's culinary skills (and your drawing skills) leave me hungry!

Rosie sure knows how to rustle up some good vittles!

Rosie...what a wonderful cook you are! And the doodles are wonderful!

We love your art - which has made Us feel hungry (mol).

What a fun meal. I'll take a fish taco and some meatballs.