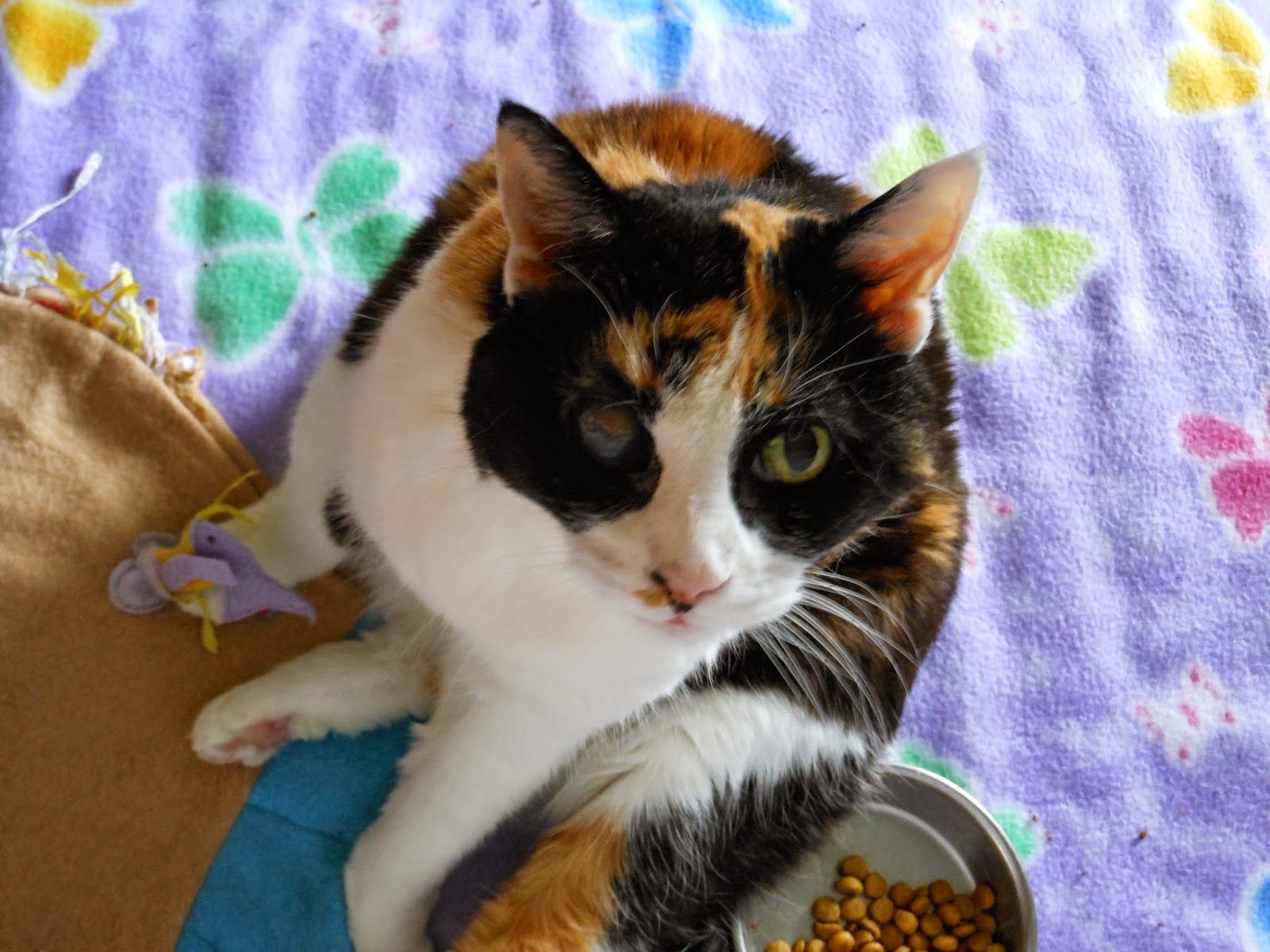 I'll take this time to note that all four of Rosie's paws were declawed when she was a kitten. Declawing is a highly debated topic. Having a declawed cat and knowing its effects on her, I will openly admit that I personally am anti-declaw. When a cat is declawed, not just the claw is removed, but also part of the actual digit itself. This forces the cat to learn to ambulate differently than their natural tendency. And that is why cats that are declawed -- whether two or four of their paws are declawed -- are extremely likely to develop worse arthritis than non-declawed cats. So, having been declawed as a kitten, now 21-year-old Rosie has severe arthritis.

So, how else do I try to help alleviate Rosie's arthritis? By making sure that my house and life is built around making her comfortable and making everything as easy on her and her old joints as possible. She has given me over twenty years of companionship, so it's the least I can do for her.

What are some of my methods for helping to alleviate Rosie's arthritis? Well, I place step stools and makeshift stairs for Rosie to use to get onto and off of furniture, since her arthritis makes it difficult for her to jump. I also make sure that she has plenty of soft beds to lie on, so that her joints are not stiff from or pained by hard and uncomfortable bedding. In cold weather, when her arthritis seems to bother her the most, I make sure she has means of staying nice and warm. And, I make sure that her food and litter box and other necessities are as near to her favorite sleeping areas as possible, so that she doesn't have to travel too far with her stiff joints.

Queen Rosie may have arthritis, but with the help of lots of TLC she doesn't let it get her down.
Posted by The Menagerie Mom at 10:05 PM

I only have declawed cats. No, no what you are thinking. I adopt declawed rescued cats and pamper them. They get smaller litter, which is softer and more comfortable and is easier for them to shake off. Later on in life, warm blankies and soft places to be. I am older and have arthritis, too, so I have, I think, a special understanding. My Quinn gets Cat Attract, which is more expensive but has smaller granules that she likes on her paws much better than other litters. She already gets soft warm blankies! Spoiled, but deserving, right?
Thank you for following my blog. I am adding you to my Bloglovin lists.

I admire that you adopt declawed cats and give them the spoiling they both need and deserve! Such a wonderful thing to do! There's simply something special about caring for animals that are "special needs", I guess you could call them.

I also want to let you know that I love your Quinn's facial markings, especially that half black and half white chin! Rosie's littermate Sammy had almost identical markings on his chin, except his was black on the left and white on the right.