Evan spent some extra time trying to set up the camera for a purrfect selfie today. 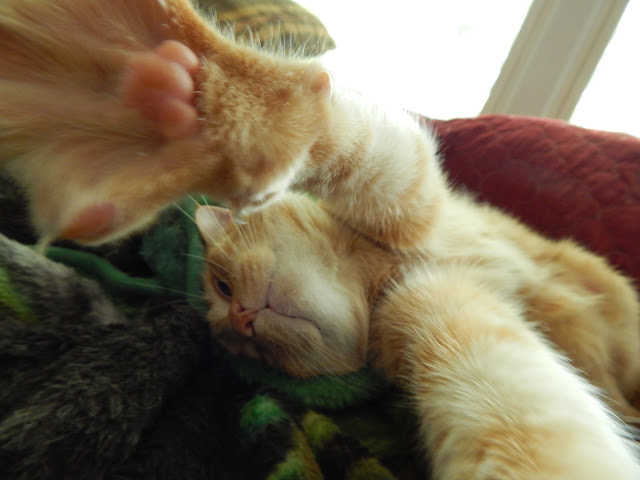 By the time he got it all situated, though, he was so tired he fell right asleep! 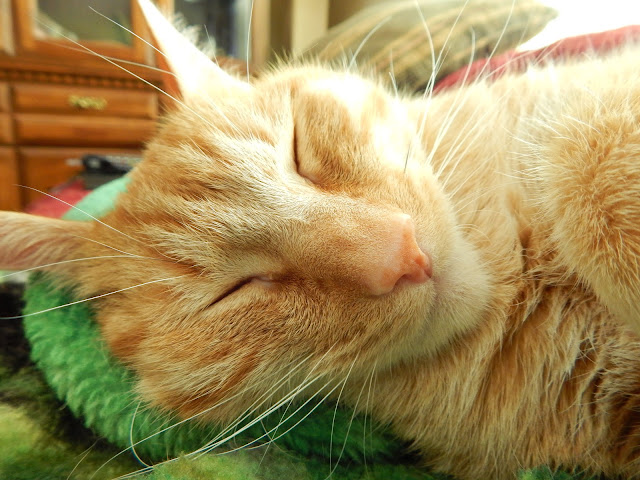 It looks like Evan's selfie turned into an Easy Sunday shot. Zzzzzz. Regardless, these were Evan's attempts at joining in on the Sunday Selfies blog hop, hosted by the Kitties Blue over at The Cat on My Head.

Our newest series of bookish doodles continues today. This one is brought to you by Angel Rosie. 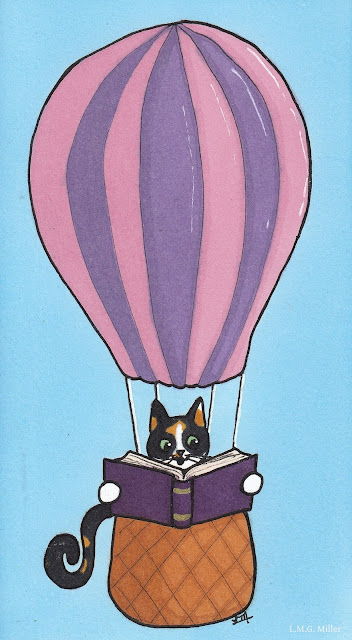 Today's (overly lengthy) tip in our litter box series is about selecting the type of litter. There are many, many kinds of litter out there. There's clay litter, corn litter, wheat litter, pine litter, litter made out of recycled paper,  and even litter crystals, just to name a few. There are even choices such as scented versus non-scented litter, litter for single-cat versus multicat homes, and clumping versus non-clumping litter. The options for litter seem to be endless, which can make the task of choosing one a tad bit of daunting.

So, let's go over some of the factors that will help you select a litter. To begin, first and foremost, let's go ahead and repeat ourselves like the broken record that we are—ultimately, your kitty will have the final say on what type of litter you buy. Cats can be very picky, particular creatures. Some have texture preferences, some have scent preferences, and some have any number of other preferences. If your cat doesn't like the litter you choose, they might avoid the litter box, which is in large part why they ultimately get to choose their litter.

The above being said, what are some of the main factors that might go into choosing the right litter for your kitty? Consider, of course, the type of material out of which a litter is made. For example, clay litter is often one of the dustiest, which may not be ideal for a cat or person with asthma. Also consider whether your cat has any other sensitivities or allergies. To give you an example, I once tried my angel cat Rosie on pine litter. Little did I know, pine was not a substrate Rosie's body tolerated well, and she ended up with hot spots that required steroid and antibiotic treatment. So, especially if you are trying a new type of litter, always keep an eye on your kitty to make sure they do not have an adverse reaction, and also that they do not start avoiding the litter box.

There are plenty of other random yet important factors to take into consideration when choosing litter, though. Do you have multiple cats? If so, perhaps look for a litter that is formulated for multicat homes. Does your kitty leave quite the stinkers in the litter box, and so you've chosen a scented litter? If this is the case and your cat uses the litter with no issues, then that's great. But, do keep in mind that cats' noses are far better than ours, and some cats might not like fragrance in their litter. Your cat might very well let you know if they do not like scented litter by avoiding the box, in which case you'll get the hint.

We're not done with this discourse quite yet. As we touched upon earlier, some cats have texture preferences. Since litter touches their paws, such texture preferences can of course play a large role in what type of litter your cat might use. For example, some cats prefer fine litter, and will not touch litter that is more coarse. I will also add here that I have some family members with cats who do not like litter at all, and so they use pee pads in litter boxes, which works great for those particular cats. Then again, my own Evan, in large part due to his hind limb paralysis, is towel trained rather than litter trained. So, litter texture can be a significant consideration for some cats, and in such cases there may indeed be some trial and error required. In such cases, just be patient, and you and your cat will find a litter, or even a litter alternative, that suits everyone involved.
Posted by The Menagerie Mom at 12:30 AM

Evan looks totally worn out! Too many sun puddles *giggle *

Have a good Sunday

Oooh, I love the selfie, and I know that sort of a pose is very difficult to master, let alone carry off and get a selfie of. Nice job, Evan, keep it up!
Toodle pips and purrs
ERin

Oh my gosh, those shots of Evan are absolutely priceless!

Lovely! Ours is a sleepy one too :)

Evan, that sure looks like one great snooze that you are having. Hope you have some good dreams and all of you have a great day.

What a lovely sleepy selfie ! Purrs

You may have fallen asleep doing the selfie Evan, but we love the paw shot!!!
Good info on litter too.
Purrs Georgia,Julie and JJ

Aww...such a sweet Selfie and paw, Evan. Here comes a high paw right back at you and a Pawkiss for a Happy Sunday :) <3

Great job setting up the selfie Evan. Such a cutie. Great drawing of Angel Rosie. And excellent tips about litter. Have a great day! XO

Getting the perfect selfie can certain be tiring. Hope Evan had a great nap!

I LOVE the "ADJUSTMENT" shot! Evn, right now I, Marvelous am snoozing on the top shelf of the closet, Ninja is on the other side, Kozmo is under the bed and Jo Jo - I do believe she is in the sofa!
We are having an easy Sunday!
Purrs
Marv

Evan, you are adorbs! Someday, I may screw up my courage and take a hot-air balloon ride, but I'm sorta afraid of heights! When Chuck was having litter box problems, I tried all kinds of litter, but in the end, the old tried-and-true clumping clay has worked the best.

That is a sweet sleepie selfie, Evan.

Aww, what a little sweetheart!