Our hosts, Angel Sammy and Teddy, offer a photo prompt each week. We then use that photo to help inspire us on our poetic endeavors. The fun image they shared for this week is this one here:

I remember going to a drive-in movie or two as a child. Just thinking about sitting through a movie outdoors in the sweltering weather these days makes me cringe a bit, but I am glad to have memories of some drive-in films. That's all sort of beside the point, though.

Danny was a bright and happy boy of nine,
And adventuring was how he spent his time.
He embarked on grand journeys in the pages of books,
Never passing up a tale that started with a great hook.

A new type of adventure then presented itself one day,
When Danny learned of the astounding way films could play.
A giant screen had been placed on the edge of town,
Attracting oodles of people from all around.

Danny wanted nothing more than to go on this journey,
And hoped that, when asked, his father would not turn surly.
Thank goodness, that was not the case.
In fact, the idea brought a smile to the old man's face.

Danny's father had a turquoise car with silver fenders,
And in it they embarked on this brand new adventure.
They pulled into the grassy lot beneath the screen.
Nothing like it had they ever seen.

Little did they know they were in for a bigger treat,
Which they could enjoy right there from their very car seats.
On the great big screen images appeared,
Bright and colorful and causing great cheers.

The story began in an enchanted forest,
And Danny knew this adventure would not be boring.
Shouts of joy from the audience were rife,
As characters appeared, larger than life.

Folks in their cars craned their necks to watch the story unfold,
Which began with a dragon holding a princess hostage in a manner quite bold.
To save her, knights began all sorts of capers,
Embarking on adventures like walking skyscrapers.

Danny thought the knights were incredibly rad,
But soon appeared a character that made him even more glad.
This character was none other than a cat of orange,
Who had traits quite eccentric and a tad bit foreign.

This cool cat wore boots and a hat.
And, oh my goodness, what was that?
Suddenly appeared a beast that elicited screams.
It was the cat's friend, and it was gnarly and green.

After the shock of the trollish brute abated,
The audience watched as, to the green friend, the cat stated,
"Hear, hear! Let us go on a quest!
What destination do you think would be best?"

It seemed the orange feline already had an idea in mind,
For his destination he really quite quickly did find.
It was to the audience in their cars that he did turn,
At the same time letting out a rumbling purr.

Right out of the movie screen the cat suddenly peeked.
Then, out of the screen one little paw did sneak.
Then it was two orange paws that stepped amongst the cars,
Blocking the audience's view of the night sky and its stars.
The cat's purr sounded like thunder overhead,
Yet, in truth, that fluffy orange feline caused no dread.

Suddenly, though, there was nothing but screams.
Everyone hopped out of their cars like jumping beans.
Danny wondered what on earth they all had seen.
Then he himself caught sight of the terrifying scene.
Alas, the giant of green was now emerging from the screen!

I wasn't sure whether to leave you all on a cliffhanger or not. Apparently, I went with yes. 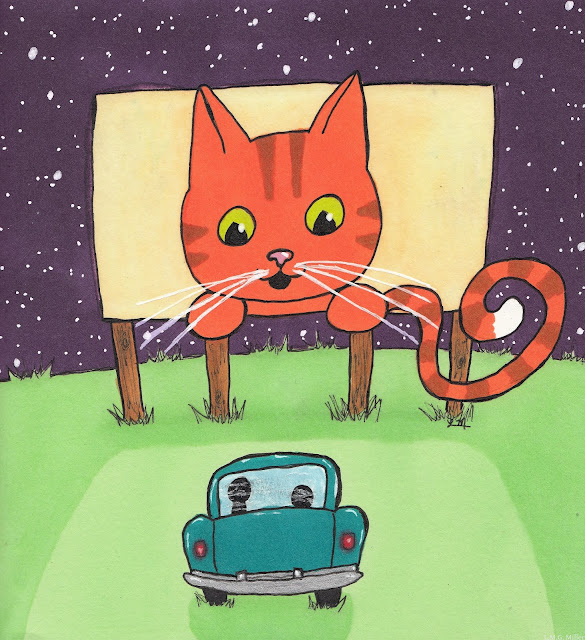 Some of you might know what's next. That is, of course, a fix of Thimble, who is participating in Brian's Thankful Thursday Blog Hop. 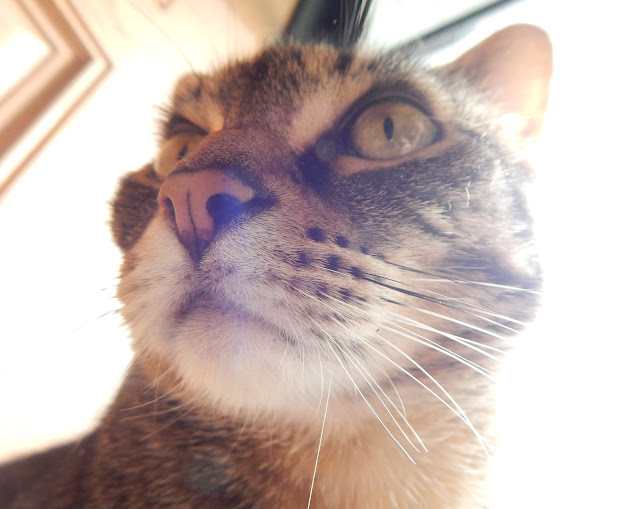 Thimble is very grateful for the beautiful sunshine and the sun puddles that result. She is also very thankful for air conditioning, in which she can enjoy the sun in cool comfort. We know not all kitties, pups, and humans are so lucky, and we purr, woof, and pray for all those who are battling the elements any time of the year.

All of us here are also, of course, incredibly grateful for this wonderful blogging family.

Last but not least, we have for you the fill-ins for tomorrow's Friendly Fill-Ins challenge. The first two are from the mind of Ellen of 15andmeowing, and I came up with the second two.

Is your kitty a chewer? Do they put anything and everything in their mouth? While we're sure you all know to keep potentially dangerous plants out of your home, do you have safe or fake plants on which your kitty chews? If your cat goes outdoors, do they tend to eat grass on the lawn? If the answers to any of these are yes, and if medical issues have been ruled out for any abnormal behaviors, do perhaps consider keeping some cat grass growing in your home. Even if any of the above statements aren't true of your cat, you can of course still offer cat grass. Cat grass is a safe plant on which many cats enjoy chewing, and which also serves as a source of fiber than can help keep things moving sufficiently through the GI tract. For example, cat grass might be able to help prevent issues with hairballs.

You can purchase cat grass that has already been grown and is ready for your kitty's chompers, or you can grow your own. It is relatively simple to grow, and is also typically cheap. So, do consider looking into keeping cat grass in your home, both for your kitty's entertainment as well as for their health.
Posted by The Menagerie Mom at 12:03 AM

Very cool poem-story! Captured all the magic of going to the drive-in along with a LARGER than life ending...haha...thanks for always making us smile on Thursdays with your poetic entry and accompanying doodle. You make Thursdays more fun!

My peeps said they used to go to the drive-in every weekend when they were dating but noting scary ever popped outta the screen, very cool story. Thanks for joining the Thankful Thursday Blog Hop!

Great poem and we really like the doodle too. It is always fun to come here. Have a wonderful day.

Sadly, most drive-ins of old have gone the way of the dodo bird! But many towns have family movies in parks, or even in professional baseball stadiums, which is a little bit like being at a drive-in. And characters coming OUT of the movie screen...WOW!

I loved the drive in theaters back in the day. none around here anymore. Fond memories.

Our mom loves Puss N' Books as well. This is a great poem, and we don't mind the cliffhanger...nice to use our imaginations. XOCK, angel Lily Olivia, Mauricio, Misty May, Giulietta, angel Fiona, Astrid, Lisbeth, Calista Jo, Cooper Murphy and Sawyer

Yikes! Now we wanna know what happens! Drive in movies were so cool. Too bad they seem to have mostly disappeared.

Great start to a story poem, i hope you finish it soon with a wonderful adventure.

I *adore* Puss in Boots, and I loved the drive-in as a little girl! I miss those days.

That was excellent! Such a cute drawing to go with it too. And Thimble is beautiful, as always. Glad she has some sun puddles to enjoy. Excellent tip too, except I always forget to water the cat grass so it doesn't last long :( I look forward to your answers tomorrow and all the participants.