Festive Selfies and a Festive Rhyme 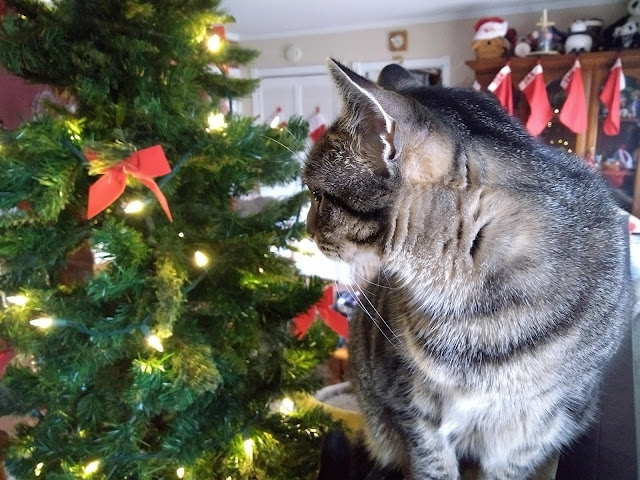 Today is indeed the final day of Christmas, at least with regard to the Twelve Days of Christmas. Tomorrow is what is known in the Christmas season as the Epiphany, or Three Kings' Day. So, the Christmas goodness isn't over quite yet. If I'm being honest, we'll probably have our Christmas decorations up until next weekend in order to prolong the festive season a tad bit further. The furbabies aren't sure whether to be excited for the extended life of their beloved Christmas trees, or to simply think their human is crazy. 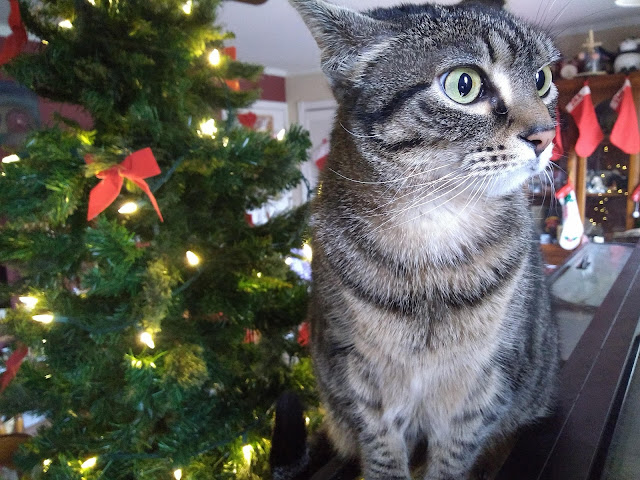 Thimble hopes you all enjoy her festive selfies on this Twelfth Day of Christmas!

Today we're also sharing our poem for Angel Sammy's Thoroughly Poetic Thursday challenge. Indeed, it's not Thursday, but we'll be back to the usual scheduling this week. For now, though, we're sharing a poem on Sunday. 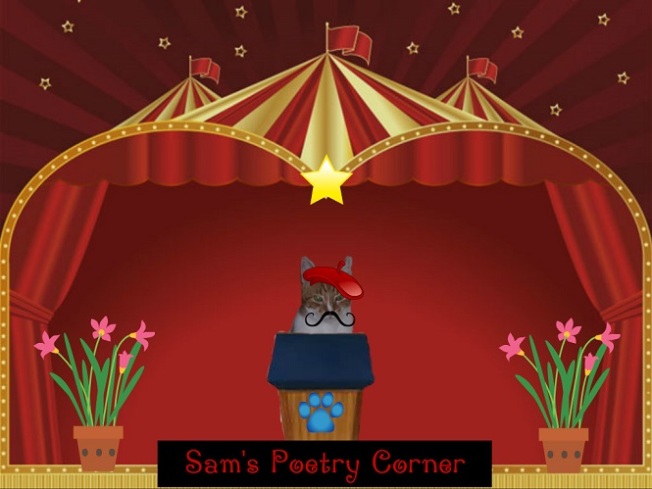 As always, our host shared a photo prompt to help us get poetic. This past week's prompt was this one here: 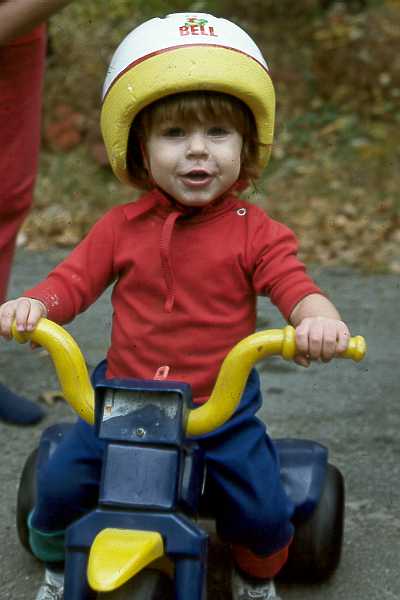 We're sorry to anyone who has put Christmas far behind them, because my poem for this week is yet again a festive one. Given that we're still in the Twelve Days of Christmas, I simply couldn't help myself. Our festive poetry will be done after today. If you're up for a final Christmas rhyme, though, here you go.

Danny was an active and adventurous boy of four.
For Christmas he wished for but two things, nothing more.
On the day his mother helped him pen his letter to Santa Claus,
He told her what to write without a single moment of pause.

"Dear Santa," Danny asked his mother to write.
"There are only two things I want on Christmas Eve night.
I'd like a bike to ride in town from end to end.
Also, I'd really like a very best friend.
Sincerely, Danny.
P.S. We'll leave you cookies and candy."

Danny's letter to Santa was sealed and sent.
His mother asked why he wished for a bike and a best friend.
Danny said that was how he wished his time to be spent.
He wished to have a great many adventures on a bike,
Of course with someone to call a true friend by his side.

Each day, Danny asked his mom how long it was until Christmas.
The days seemed to create a dreadfully long distance.
Then, finally, Danny's mother told him Christmas was but a day away.
That night, Santa Claus himself would arrive in his sleigh!

Danny and his mother baked cookies by the batch.
By the fire they left goodies on which Santa and the reindeer could snack.
That night, Danny didn't have to be told to run off to bed.
He was tucked in and trying to sleep well before seven.
He simply couldn't risk being awake and scaring Santa away.
Otherwise he'd surely receive no bike or best friend with which to play.

Though it took a great deal of time and effort,
Danny finally fell asleep, dreaming of his Christmas letter,
Dreaming of bikes and best friends to make life more than better.
The second the sun peeked over the horizon,
Danny awoke and his eyes quickly widened.

Faster than fast, he ran down the stairs.
He briefly noticed that Santa had eaten every cookie they had prepared.
More so, though, he noticed what sat beside the Christmas tree.
It was a bicycle of green!
It was a tricycle, to be honest and exact.
But Danny didn't mind, because his inability to ride a bike was a fact.

Danny was so very grateful for his new tricycle,
But he remembered that just one of two things on his list was a bicycle.
He had also asked for someone to be his best friend.
Was that something that Santa had also sent?

Danny didn't see anything that resembled a best friend beneath the Christmas tree,
So with a sad little smile he began to his admire his new tricycle of green.
On the front of the bike hung a basket,
And suddenly something shot out of it and left Danny choking and gasping.

What on earth was that in the basket at the front of his new trike?
Danny gazed and finally made sense of the sight.
It was now obvious what was perched in the tricycle's basket.
It was a kitten, and that left Danny smiling and laughing.

Around the kitten's neck was a festive bow of green.
The grey little cat began adorably mewing and meowing.
"Santa brought me everything I wanted!" Danny shouted.
He would certainly be doing not even an ounce of pouting.

Danny sat on the seat of his brand new tricycle.
He said, "Santa brought me this wonderfully three-wheeled vehicle.
Even better, he brought me the bestest of any best friend."
Danny picked up and hugged his mewing little kitten.
Danny now indeed had the most loyal best friend,
That little kitten known from that day on as Mittens. 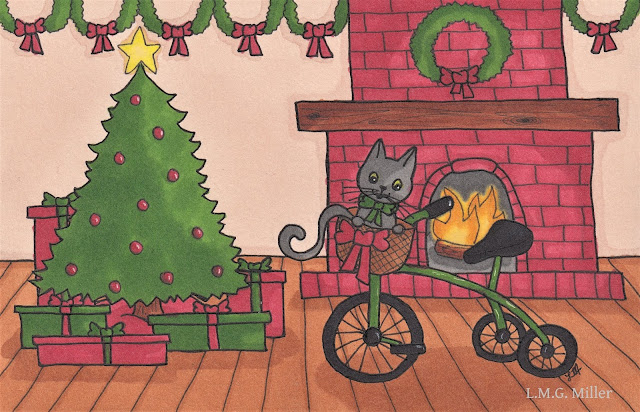 We are still working through our series of tips on caring for outdoor feral and stray cats in the cold winter months, and we're currently still on the topic of shelters. If you do care for feral or other outdoor cats, if possible, try to offer more than one shelter. These could even be just multiple plain and simple shelters, and even makeshift ones that allow cats to find some form of respite from direct exposure to the elements. Having multiple shelter areas can allow for more cats to find a potentially safe and warm place to spend a cold day or night. Multiple shelters can especially, of course, help reduce competition, especially amongst cats who might not get along and therefore might not readily share shelter space. Putting shelters in multiple locations is also a way to reduce competition and to allow more outdoor cats to find a safe place to stay in the winter. You can also offer varying shelter types, such as those made from different construction materials and those with different internal layouts. This could help cater to feral or other outdoor cats who might be picky about where they are comfortable staying. Offering any shelter at all, even just one, is of course incredibly beneficial to outdoor cats in the cold winter. If you are able to offer more than one shelter, though, do consider this as a way to enable more cats to be safe and warm in the winter.
Posted by The Menagerie Mom at 2:34 AM

We often feel we want to leave the decorations up a lot longer. We love our tree.

Your pictures are lovely too. I have never had any luck taking cat and tree photos.

A lovely tree-side selfie. No decorations up here to worry about taking down, MOL. But if they were, I think I'd want to put something bright instead, spring-like and go with the seasons.
Purrs
ERin

What a DARLING poem story about Danny and Mittens and a most wonderful Christmas! Enjoy your Christmas tree at home as long as you can - the magic just goes on and on. Thanks for playing poetry with us every week....we look forward to yours so much.

Wonderful Christmas tree selfie. What little decorating mom and dad do come right down at mom's hands almost immediately afterwards, though they do keep a string of white mini lights up in the living room year round. Happy Sunday! Oh, and love the doodle!!

We love your poem about Danny and his most excelent Christmas. :)

And Thimble, you are looking adorable, as always. Our tree is still up, too. XO

Enjoy the decorations all! I love your series on feral caretaking - you rock!

Great shots of Thimble Our tree will be up for a while still too. I am glad you did a poem, excellent, as always. Cute drawing too. And great tips XO

I think it's best to leave the tree up long after Christmas. I can never let go of the holidays. Your tips for feral cat shelters are important. Thanks for sharing them.

Thimble, that's a lovely selfie. You have gorgeous, green eyes.

You are so lucky to have your tree still up. Ours is gone...stored away. Sometimes we think we live with Scrooge.

Lovely to see the decorations still up. Thanks for leaving advice about helping ferals and strays - this time of year is so hard on them.

Love the poem and the drawing... sweet to think a little boy got both a trike and a kitten named mittens!!

Purrz from Katie and the Katz.
(found some toys you sent a few years ago - gave them to our current 8 foster kittens!! They love the rolly balls!!)

It goes by SO fast. The decorations start to lose their magic by now, but I can't part with them yet.

Some Scandinavian traditions celebrate until 20th day. Remember, too, you can leave an artificial tree up all year and decorate it for every season, as one of my clients does.