It seems that I'm never not under the snoopervision of at least one furbaby. Even when I'm simply scribbling in my sketchbook, there's a furbaby nearby to make sure I'm behaving. 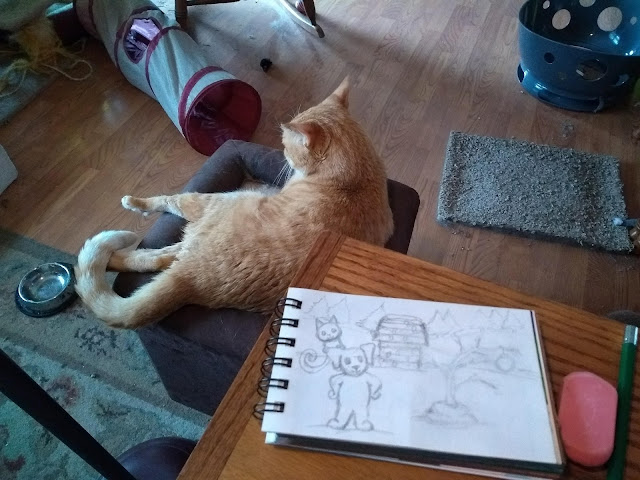 You're not only getting a glimpse of how Evan is my shadow, but also how my house most often looks like a tornado of cats tore through it. There are toys, tunnels, scratchers that have been absolutely massacred, rogue food bowls, and all that jazz. My favorite feature you can see here, though, is of course my boy Evan. 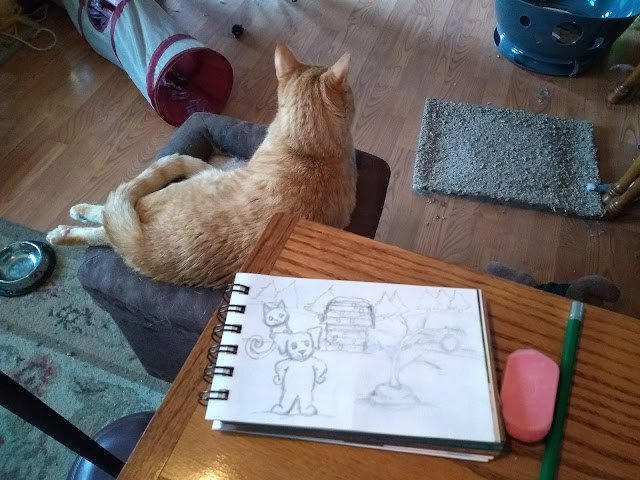 How many of you kitty friends of ours constantly snoopervise your humans? All of you? That's probably best, because humans need all the snoopervision they can get.


***
Festive Doodle of the Day

The Twelve Days of Christmas may have ended yesterday, but today is what is known as the Epiphany, or also known as Three Kings' Day. This signifies the day when the three kings, also known as the three wise men or the Magi, visited baby Jesus after following the Star of Bethlehem to the location of his birth. The three kings brought baby Jesus gifts of gold, frankincense, and myrrh. In some religions and cultures, gifts are also exchanged on this day, as a representation of the fact that the three kings gave baby Jesus gifts. I do give my family little gifts on this day, and of course that includes the kitties and pup.

All of the rambling above was simply intended to indicate that the Christmas season still isn't quite over for us here. So, here's a final festive doodle. 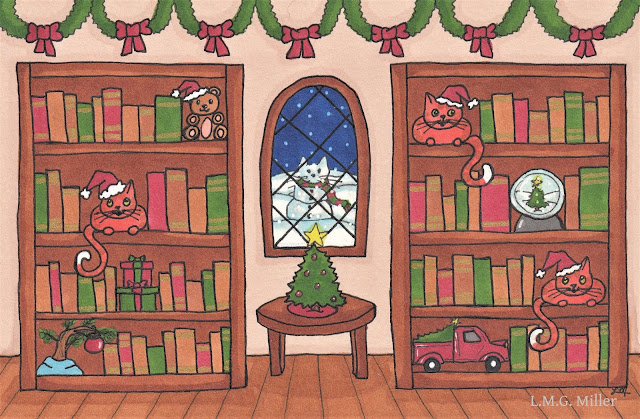 In some cases, outdoor cats just need a little extra help realizing that a shelter is safe and for them. If you have not already done so, put food and treats inside the shelter to tempt feral and other outdoor cats into the shelter. You can perhaps similarly tempt a feral into a shelter with bedding and a heat source, if you have found a workable, safe way to provide that in the shelter. If further tempting is needed in order to get cats into outdoor shelters, you can even try sprinkling some catnip, or silver vine or valerian root, inside in order to entice them.
Posted by The Menagerie Mom at 5:04 AM

I love that your house is cat friendly, cats are neat and tidy beings - but they sure can make a mess for their humans! More good advice for feral caretakers, thanks! Evan, you are one handsome snoopervisor, I usually have my Stella sitting like a vulture over my keyboard when I work - MOL!

Our house has toys and cat stuff all over too. It supposed to be that way! :)

Our house has so many kitty toys, tunnels, scratchers, etc that it is more crowded than my niece's with her 2 little girls' toys around. I don't mind though. I love the drawing with the Charlie Brown tree on the shelf :) Good job snoopervising Evan. Excellent tips too. XO

And we wouldn't have it any other way! Love that doodle too.

Our cats are always snoopervising us. It's wonderful having very social cats and it often works in our favor.
And yes, our house is like that! In fact, most of the decor is for the cats MOL :)

TBT here: I loved seeing your sketchbook! I can't draw. My best effort makes people unsure if it is a dog or a deer! A niece can sketch a recognizable cat with only several curves. I can't even COPY that.

I'm more a geometrist or mechanical engineer. In school, I could follow complicated overlapping geometry figures like mazes. One corner would say 45 degrees, and the opposite corner would ask the height of an ending triangle. And I LOVED that.

But I sure can't draw any living thing...

I always enjoy seeing my hero Evan in a photo.

That is a wonderful doodle! We LOVE it! Evan is quite the follower and he really has some toys to play with. Hello Evan