Christmas may have come and gone, as well as the Twelve Days of Christmas. But, believe it or not, we still have a few Christmas bits and bobs to share with you. Today's little Christmas bit we have to share is one of the toys the kitties received as a gift on Three Kings' Day, January 6. 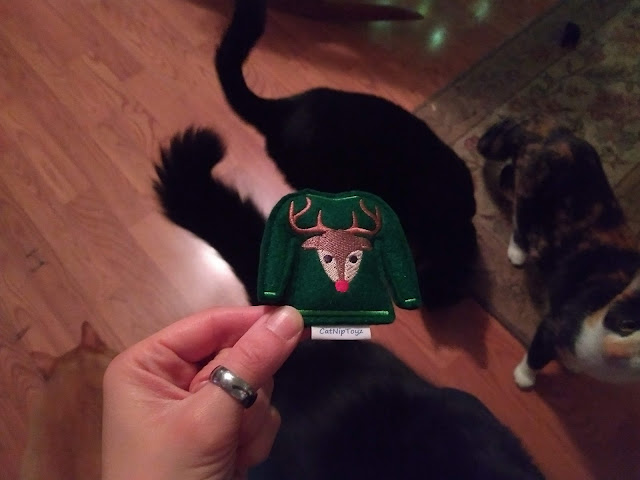 I was hoping for a cute shot of at least one of the kitties playing with this "ugly" Christmas sweater toy (isn't this thing simply too darn cute to call "ugly"?), but whatever its masterful creator used as catnip filling turned my kitties into tiny little maniacs. In other words, the resident felines refused to let me get a picture of the toy with it in their possession. That's why I had to resort to stealing it from them and holding it up to the camera. As you can see, I was being circled by sharks cats as I photographed the toy. 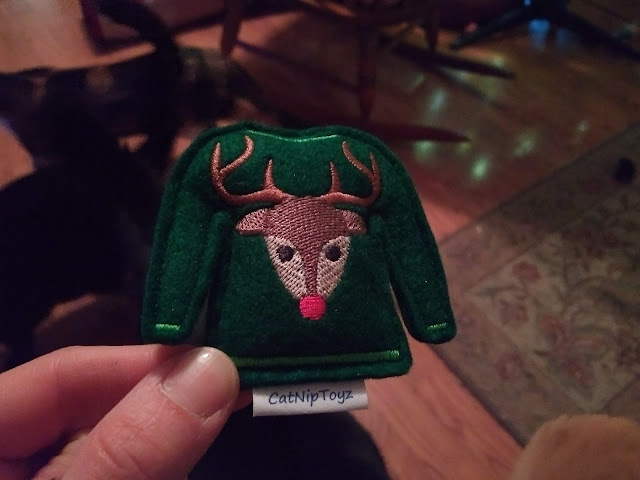 This toy is from the shop on Etsy called CatNipToyz. We're not sponsored or receiving any compensation for sharing this toy or mentioning the shop. We're just so very happy with this cute and festive little kitty toy!

Warm wishes to all!

We may have mostly stopped with the Christmas doodles, but we're nowhere near done with doodles of a general winter sort. We decided to have our first such winter doodle be one of our favorite flashbacks from last year. And that would be this one here: 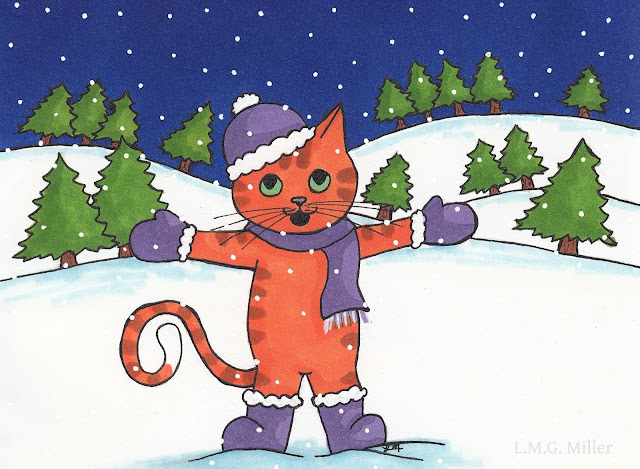 I scribbled up an entire series of doodles with the above sort of theme last year, and for whatever reason that doodle above is my favorite one from that series. I wonder if sharing this flashback doodle will earn us any snow in real life. The cold nature of snow, as well as the dangers of driving in it, are not necessarily the funnest things in the world. Nevertheless, I do like seeing a bit of the white stuff throughout the winter. We've only had one bout of snow this entire winter, though. It snowed plenty on Halloween, and then it was nearly 65°F on Christmas. What's the deal, Mother Nature?

Yesterday's tip was to do regular checks of outdoor cat shelters, such as to ensure that the shelter is not leaking, broken, or dirty. Another tip in this same line of thought, but that we failed to mention yesterday, is to ensure that shelter doorways do not become blocked by snow or anything of this sort. If it snows, check the shelter and clear away any snow that might threaten to block the doorway. This will ensure that the feline inhabitants can enter and exit safely and without feeling trapped. Also check for anything else that might block the shelter entrance or cause a similar issue, such as if a thunderstorm or wind knocks down or blows around tree limbs or other debris. In such cases, of course ensure that the shelter entrance is not blocked, but also that the shelter did not suffer any damage. When you are caring for ferals and other outdoor cats, offering them shelter might mean you have yet another little home to look after, but it will be for a very good cause.
Posted by The Menagerie Mom at 12:00 AM

WOW.....must be some really good stuff in that toy considering the number of sharks circling the prize!

What a great toy and it has Rudolph on it. Can't get any better then that. Have a great day.

We have a slight bit of snow right now, and are happy because the temps are going up tomorrow so it will disappear! And even though it's only a trace of snow, I spent a few minutes this morning sweeping it off the deck, so The PO'M and Sweetie don't have to put their paws in it. When it's heavier snow, I'll shovel the deck clear, then shovel out pathways to the cats can get around. But then I sit down, and The PO'M climbs into my lap, and all is right with the world.

That is one great looking ugly sweater catnip toy there. The kitty crew couldn't wait until you were done with photos to let them play again. We are getting a little snow today but nothing serious. Thanks for the share. Have a wonderful rest of your day.
World of Animals

That must be some powerful catnip. Hope you get a bit of snow to enjoy, and that it does not overstay its welcome.

That is just too adorable!

That is a very cute catnip toy.

That's too cute to be ugly. The catnip must be primo grade ... look at all your kitties!

That's such a cute toy. And filled with nip...even better!

That is a cute toy. Glad it was a hit. I like that drawing too.Excellent tips as well.