As has been evidenced by a couple of our recent posts, I recently did an unofficial and rather low quality photo shoot of my parents' cats when I visited their house. Want to see my parents' two biggest cats together? They're both handsome fellas, and they're both over 20 lbs. 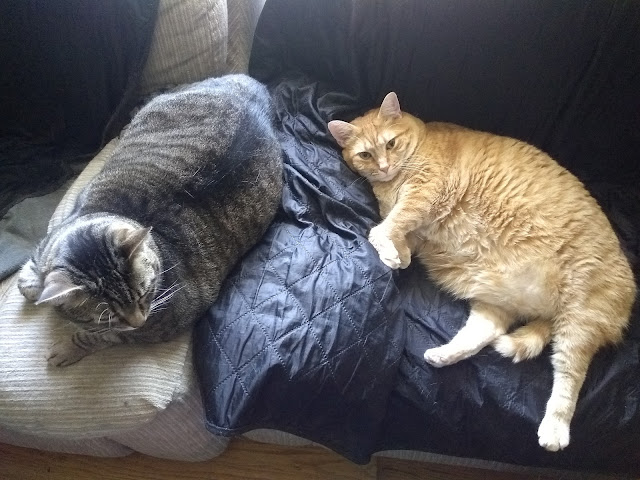 Say hello to Trapper and Foggy! Some of you might remember these boys, as they've both been on our blog before. Strangely enough, despite what that photo there might suggest, these two big boys don't eat a whole lot. Neither of them comes running when the food bowls are filled. So, how did they get to be over 20 lbs? Well, they do like lounging about just as they're doing above, so that might have something to do with it. Honestly, I love hugging both of these big boys, because there's just so much of them to love. Even so, both my parents and myself try to get these boys to play more in order to help them lose weight, but they're just not that into moving around a whole lot.
You know what, how about one more candid shot of these two boys with one of their sisters? Let's add Gilly to the mix now. 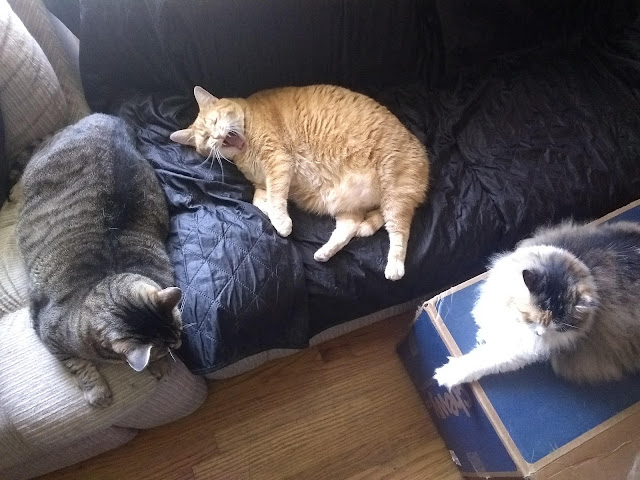 First of all, do you like Foggy's yawn in that there photo? As for Gilly, who is in terrible lighting and refused to look at the camera, she kind of looks like a big cat here, but she's mostly fur. She's only something like 8 lbs. Her insane fuzziness makes her look deceptively large. Oh, and she's a total daddy's girl. She has my dad wrapped around all four of her fuzzy little paws.
Happy Tuesday!
***
Flashback Doodle of the Day
Today's flashback doodle takes place in a weird, wacky, whimsical sort of garden I scribbled up last year. Though it's a weird one, I remember really enjoying creating this doodle. 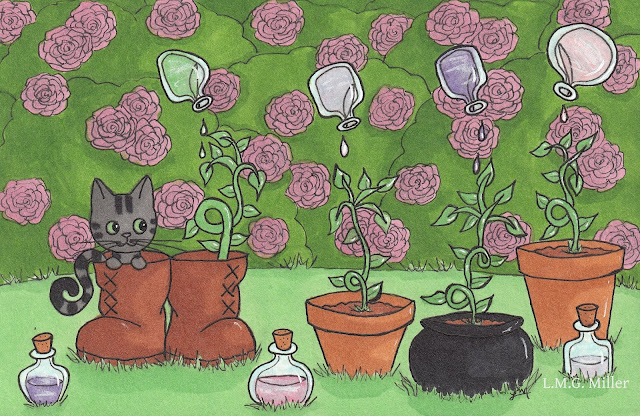 ***
Did you know?
Yesterday we mentioned how a cat grooms after eating in order to remove the scent of their prey from themselves, which in turn keeps other predators from preying on the cat because of the scent of the prey they consumed. Today, how about we mention a couple of other reasons why a cat might lick themselves? It goes without saying that general grooming is of course the primary reason for a cat licking themselves. The papillae, or spikes, on their tongue help them remove loose hair and other debris off of their fur.
Aside from the aforementioned obvious grooming, why else might a cat lick themselves? One reason is to help them cool down. This is because evaporation of saliva on the fur can help a cat feel cooler. Cats might also very well lick themselves for any number of behavioral reasons. For example, cats might lick themselves when stressed or nervous, some of them even anxiously grooming enough to cause bald spots. Another behavioral purpose for a cat's licking is social grooming, or allogrooming, during which a cat licks another cat it is close to or trusts. This type of social grooming helps build and reinforce relationships between cats. Your kitty's tongue and grooming sessions can have many purposes. If you notice any abnormal grooming, of course discuss this with a veterinarian.
Posted by The Menagerie Mom at 12:00 AM

YAY for big boys! As you know I have a fondness for my own big boy at 22 lbs. I was concerned when we realized he was becoming rather huge after we adopted him but our vet said that he was a very LONG cat and BIG boned but to be safe he prescribed a weight maintenance dry prescription food and Ted has maintained his weight for two years. Anyway, he's a big cuddle bug and I'm sure your parents' BIG BOYS are too. There's just SO MUCH TO LOVE!

My big boy, Paddy O'Malley, appears to have lost some weight this summer, and I'm glad of that! He's pretty active, but then again, I see him sleeping a lot too. The life of a cat...*sigh*

There's a lot to love with those two!

Beautiful butterballs! Mudpie is the same way. She's not a big eater at all but has become a very full-figured gal.

Trapper and Foggy are so adorable- more to love. Cute drawing and interesting information.

Trapper and Foggy are both big ol' hunks of love!

All 3 of your parents' cats are adorable! It's hard to believe how much fur Gilly has. She does appear much larger than she is (don't tell her I said that MOL).