Pup Astrid knows she's not a cat, but she hopes all you cool cats out there don't mind seeing her every once in a while. 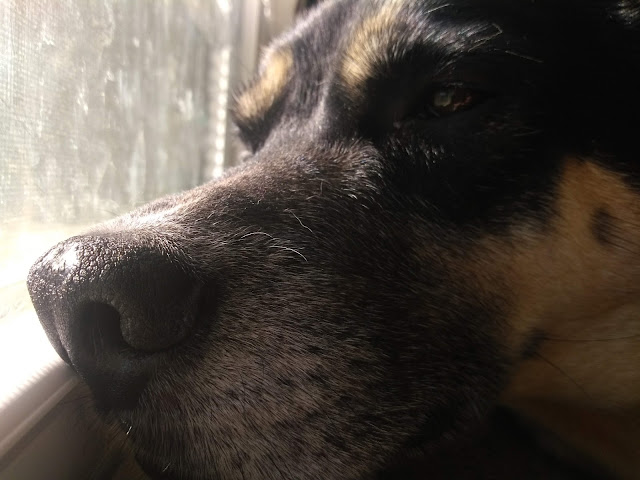 Can anyone see that sort of raw spot on the tip of Astrid's nose? She did that trying to use a rug to bury a bowl of her food that is apparently unacceptable. I was in the other room, and by the time I realized what she was doing and went over to stop her, she'd essentially given her nose a rug burn. She wasn't bothered by it at all. Actually, she does this somewhat regularly. Astrid is perhaps the pickiest furball in the house, and that's saying something, since she lives with 6 cats. Astrid doesn't only use rugs to bury food she doesn't like. She'll also grab nearby cat toys, her own toys, and pretty much any paper product she can find. If you leave a jacket somewhere nearby, she'll use that, too. Oh, and there's also that time she pulled a pillow from the couch to bury an unacceptable flavor of food. It's unfortunate that Astrid's absolute favorite food was discontinued, because watching her bury unworthy replacement foods is sort of a daily event at our house now.
Happy Wednesday!
***
Flashback Doodle of the Day
Today is the birthday of this here human's mom! That means it's the furbabies' beloved Gammy's birthday. We're sharing her birthday card from last year in honor of her birthday. She's of course getting a new birthday doodle this year, I just didn't have it completed yet when I wrote this post. Last year's card was inspired by my mom's crafty nature. 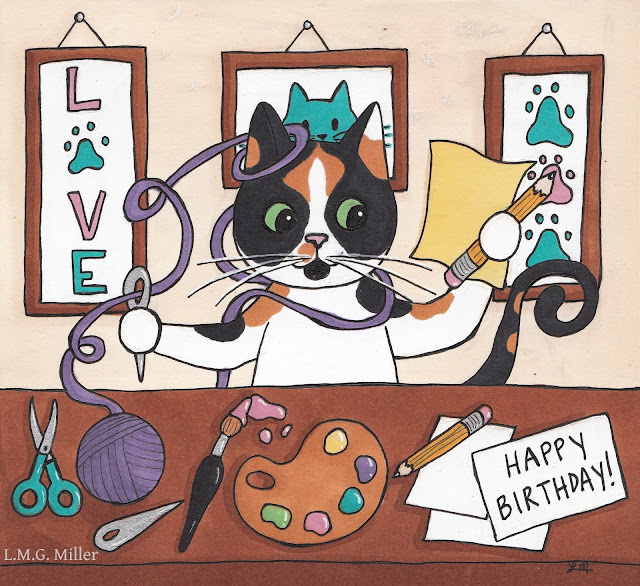 Happy birthday to my mom, the furbabies' wonderful Gammy!
***
Did you know?
Did you know that the act of an animal hiding their food is known as caching. In the wild this often involves putting debris such as dirt or leaves on top of the food. It can also mean more formally burying the food, like what squirrels do with acorns and other food sources in preparation for winter. The reason animals in the wild do this is to hide the food from other predators, as well as from the sun and other elements. This helps ensure that they can come back later when they are ready for their meal.
Domesticated animals might also bury, or cache, their food if they are not hungry, or if they are not comfortable eating the food at that very moment. Even animals like Astrid burying a food she's expressed dislike for could still be doing so to hide it from others. After all, Astrid lives with 6 cats, and sometimes she decides at a later time that a previously unworthy food is actually okay to eat. So, if you see your furbaby burying their food, it might simply be because they're not hungry or otherwise not ready to eat it just yet. Of course, if your cat or dog displays any such behaviors in a concerning way, or if their appetite changes, of course discuss this with a veterinarian.
Posted by The Menagerie Mom at 5:41 AM

Astrid, we hope you let the authorities know that you want better food!

Happy Birthday to Grammie!
Both Manny and CB will scratch at the floor, as if trying to bury their food bowls.

Hello, Astrid, i hope you are having a great day.

Wishing many happy returns of the day to Grammie!

Happy birthday to your wonderful grandma! That is too funny about Astrid covering up her food. Mudpie does that too but I've never heard of a dog doing it.

Happy Purrthday to your Mom - and many more !

Astrid, a gal's gotta have standards, right? We sure hope your nose heals quickly.

Happy birthday to your Gammy!