As always, our courteous host shared a photo prompt to guide us. This week's prompt is this nostalgic image here: 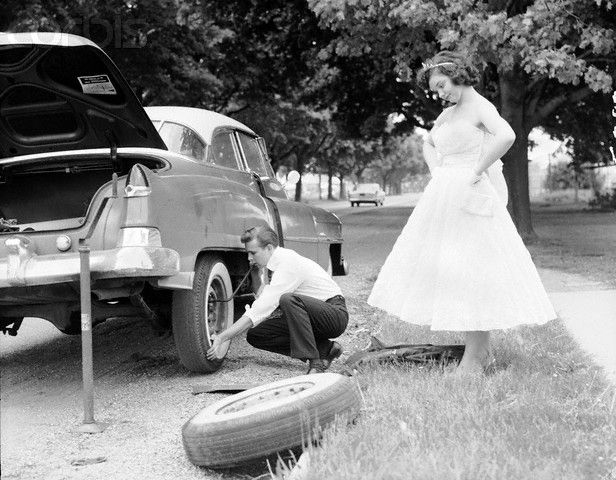 Truth be told, this photo immediately reminded me of the tire changing scene in A Christmas Story. Who has seen this classic movie and remembers the scene I'm talking about? It's the scene when young Ralphie's family is driving along in their car and the tire goes flat. Ralphie goes out to help his father change the tire, in the process some hardware is dropped, and Ralphie says, "Oh fudge." Except, we find out, he didn't say "fudge". Since that's what immediately came to my mind when I saw the above photo prompt, I decided to go with that concept. I did some brainstorming, of course figured out how I might be able to throw a furbaby or two into the poem, and ended up with this weird and silly rhyme:
Fudge
Ricky was really quite wary of the old neighbor lady.
He found her strange and more than a tad bit shady.
Her house hid amongst shrubs and trees.
From the street, the weird little cottage couldn't even be seen.
One day, Ricky's dad told him he needed his help at the family store.
As he waited for his dad, Ricky moseyed out their home's front door.
The sun had nearly disappeared beneath the horizon,
And soon enough the moon and stars would be shining.
In the front yard sat Ricky's favorite bouncy ball.
He picked it up and tossed it at a tree, nearby and tall.
Much to the boy's shock and dismay,
The ball bounced with great force far and away.
More specifically, the ball bounced over the nearby hedge.
It soared right over as if diving off a ledge.
The problem was that on the other side of those shrubs was a scary place.
It was where lived that strange old neighbor lady who never showed her face.
That was Ricky's favorite bouncy ball, though.
He did not want to say goodbye to it, no.
And so, risking scratches and even a fall,
Ricky started climbing the hedges, which were big and tall.
Branches and leaves slashed and grabbed him.
Ricky vouched to give those shrubs a trim.
Finally, he reached the top of the bush.
Afraid of this neighbor, Ricky made sure to shush.
He jumped from the hedge's top,
And at the bottom of it he did flop.
Groaning in a small bit of pain,
He caught sight of his bouncy ball just the same.
He tiptoed to it and reached to pick it up.
Right then and there, though, he was run over by a pup.
Ricky knew it was a dog by the barking and licking tongue.
Someone said, "My goodness. Are you all right, hun?"
In front of Ricky now stood the old neighbor lady.
Looking at her, the boy had to admit she didn't look all that shady.
She walked with a cane and wore a pink floral dress.
In response to the woman's question, Ricky nodded his yes.
"I'm sorry about my big ol' dog here," the old woman then said.
She added, "He's just a bundle of energy from his tail to his head."
The dog was big with a goofy grin on its giant face.
He was brown, a bit pudgy, and probably wouldn't win a race.
Ricky cleared his throat and said to the woman, "I'm just here getting my ball.
It bounced over the hedge there, even though it's so big and tall."
Just then, Ricky heard his dad calling for him.
Apologizing to the old woman, Ricky rushed to the shrubs in need of a trim.
The dog followed Ricky at a stomping run.
The pup seemed to think this whole ordeal really quite fun.
With the dog at his side, Ricky looked up at hedge.
He really didn't want to climb and again jump over that ledge.
At that moment, something brushed against Ricky's leg.
Looking down, the boy saw a whiskered and very feline head.
The cat was a tabby just as brown as the dog.
With a chirp, the cat jumped onto a tall tree limb as if it were a simple log.
The dog then stood between the boy and the tree.
He was offering Ricky a step up, the boy did finally see.
With the dog's help, the boy joined the cat on the tree limb and could easily get on the hedge.
Then he could use a tree limb in his yard to somewhat gracefully descend.
The boy laughed and thanked the cat and the dog.
The old woman said, "They really are quite helpful, are they not?
If you ever need anything, all you have to do is say their name.
Lending a helping paw is their most favorite game."
"What are their names?" Ricky asked.
"Oh," the old woman said, "Fudge is the name of my trusty cat."
"And the dog's name?" Ricky said.
"Isn't it obvious? His name is Fudge," she said, scratching her head.
Ricky informed the old woman, "But you said that was the cat's name."
"Oh," she said with a shrug, "I guess I named them the same."
With a farewell, Ricky scurried off to the car with his dad.
They made it half a block before the car's tire audibly went flat.
Ricky and his dad tried to retrieve the spare tire, but it wouldn't budge.
Tugging on the tire in frustration, Ricky said, "Fudge."
Nearby, there was a rustling and a sound like a stampede,
And then Fudge the dog and Fudge the cat ran out of the bushes and trees.
Just like that, the cat and dog jumped at the spare tire and released it.
Then the tire change was complete, quick and lickety-split.
"What on earth?" said Ricky's dad.
As for Ricky, he laughed and laughed and laughed.
The boy said, "The old woman said all I had to do was say their name.
Lending a helping paw really is the Fudges' favorite game!" 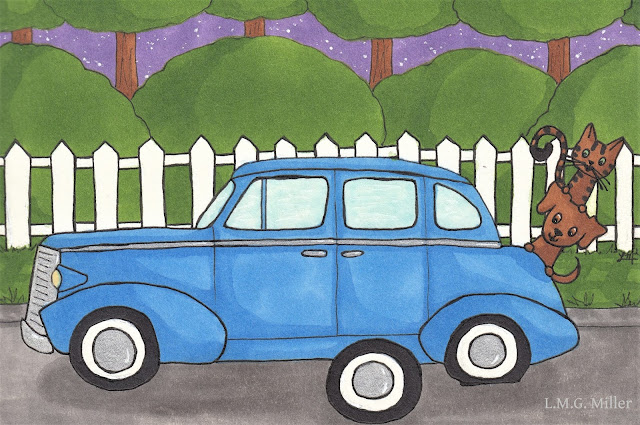 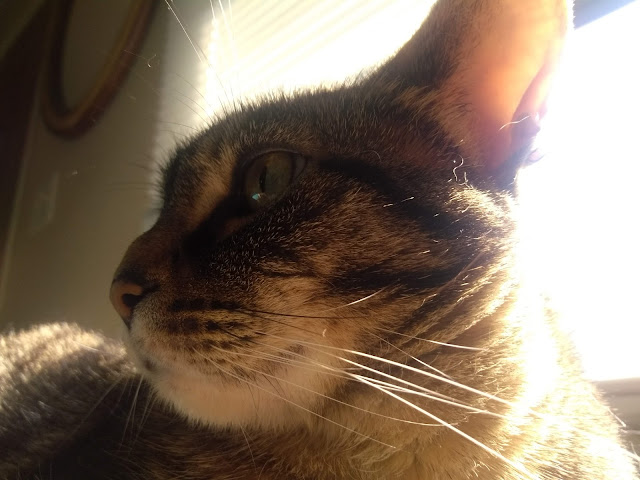 We'll see you tomorrow, friends!
***
Tip of the Day
In today's post, we commented on the shape of Thimble's nose. I jokingly referred to it as a Roman nose, as her nose has always had a bit of an arch to it. In reality, though, an uncharacteristic or exaggerated Roman nose in a cat can actually be a sign of disease. This is especially the case when it comes to upper respiratory tract diseases, such as an upper respiratory infection. Sometimes infection can get through the bone and into the soft tissues of the nose, and all of this in turn could lead to what might look like a Roman nose, or a nose with a lump on the top of it. A tumor or other ailments could also potentially lead to a nose with a lump or other similar deformity. The long and short of this is that it's important to know what your cat's nose and other features look like in a normal state. What's more, if you notice a change in the appearance of your cat's nose or any other features, of course have them seen by a veterinarian.
Posted by The Menagerie Mom at 7:47 AM

What a delightful story/poem!
One thing that I've always admired about Sweetie, is her little bitty nose; she's so tiny, and her face is purrfectly proportioned.
One of my favorite things to do...daily, or multiple times a day...is smooch her wee forehead! She always purrs when I do.

Love that poem! Thimble, your roman nose profile is stunning!

I never noticed that about her nose! Too cute. One of the names I considered for Mudpie was Fudge!

What a great duo, Fudge and Fudge. Should i say "Oh, Fudge" now when something goes wrong?

Great poem, as always. I do remember that scene with the Oh Fudge :) Cute drawing. And Thimble is always beautiful. Excellent nose information too.

Oh yes we surely remember that scene in the movie - every time Mom makes fudge she remembers it in fact! Wonderful story-poem this week. Isn't it amazing the journey our imaginations take when viewing a photo? We love it.