Welcome to Thursday! Let's get right to it with our rhyme for Angel Sammy's Thoroughly Poetic Thursday.

Our courteous host always shares a photo prompt to guide us. This week's prompt is this fun image here: 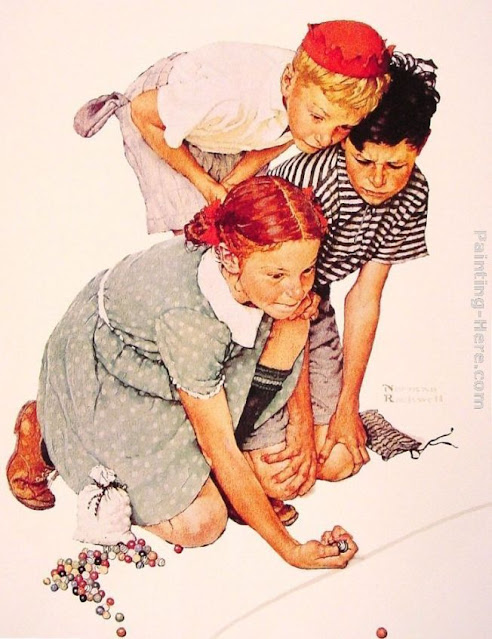 The children in that there photo prompt are quite clearly playing with marbles. Nonetheless, this photo immediately reminded me of how I used to enjoying playing jacks as a kid. You know, the game where you throw a little ball in the air and try to pick up as many of the little jacks before it hits the ground. Since that's what came to my mind, my poem turned into a story about the game of jacks. And, of course, I added a cat.
Jacks and Jill
Young Jill was a master at the game of jacks.
She never failed to go in with a winning plan of attack.
That is, until one fine day when Jill met her match,
Who came in the form of one cool cat.
On that day, Jill set up a game with her golden set of jacks.
She asked the other kids in the park who wanted to give it a crack.
She knelt on the sidewalk with a braggart's grin on her face.
Rarely did a single soul dare enter her gaming space.
Not wishing to let her skill go unseen or go to waste,
Jill bounced the red ball and went after the jacks in a race.
She managed a mighty handful on just that one bounce of the ball.
She thought, That's why I'm the master of jacks, after all.
It was at that moment that Jill's worthy opponent entered the scene.
He was a ginger with hair more than a little bit pristine.
He also had whiskers, a tail, and pointy ears.
He was indeed one cool cat, did you hear?
As Jill gloated to the other children about her game,
The cool cat walked right up and began his ascent to fame.
He slapped the bouncy red ball right out of Jill's hand,
And then slapped away nearly every jack before the ball could land.
"Look there, Jill, that cat got more jacks than you!"
The children screamed and came running to get a better view.
One child said, "Come on, you two, play another round!"
Jill quickly took her turn, trying not to frown.
Jill and the cat played two rounds, three rounds, and then four more.
Every single time, the cool cat ended up with the winning score.
Jill soon felt quite unlucky and sad.
She had never played and looked so bad.
Jill was about to get up and depart the sad scene,
But the cool cat didn't give her the chance to leave.
The cat let out a mew and then licked its paw,
Right before climbing onto Jill's legs with a yawn.
Just like that, the cat sat right on down in Jill's lap,
And then it curled right on up and took a purring nap.
This cat doesn't even care that he beat me, Jill thought to herself.
Then her mind added, This cat put his pride away on very tall shelf.
Now smiling, Jill petted the cat and took it home after its nap.
And that was the beginning of a friendship true and strong, just like that.
And that was also how Jill learned that gloating did not win you a single friend.
Friends were won when you treated them kindly from the game's beginning to end.
None of that is to say the cool cat ever let Jill win.
He was simply a master of jacks and won ten times out of ten.
He never rubbed his victories in Jill's face, though, or anything like that.
He simply enjoyed playing, and then turning in for a nap. 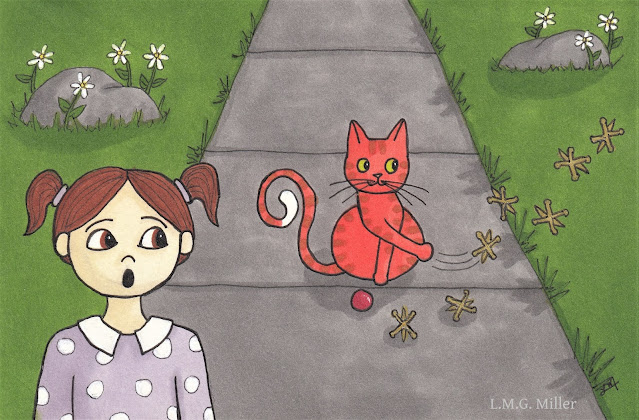 ***
Thursday is a great day for giving thanks, especially since it's the day of Brian's Thankful Thursday Blog Hop.

As always, Thimble is here to share her gratitude. Today, Thimble is thankful to have at least one kitty in the house she can sit next to. 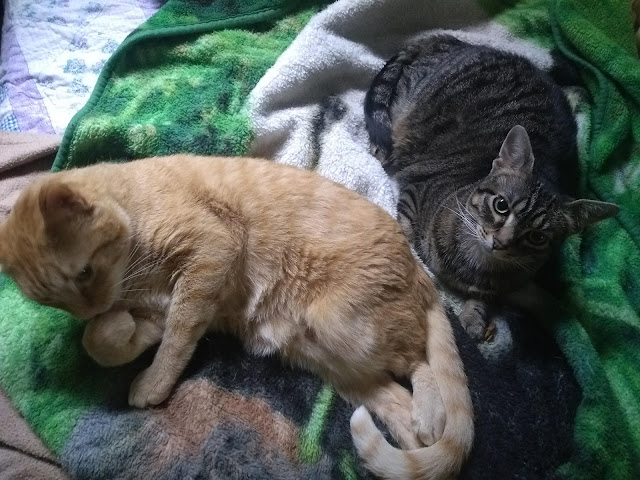 We've mentioned before that none of the 6 kitties at our house really cuddle with each other. Many of them will sit in the same room as each other and even on the same furniture, but rarely with or next to each other. If there are any close encounters, it often involves Evan, simply because he's the most likely to accept another cat napping next to him without starting a fight. So, in these photos, Thimble took advantage of that. 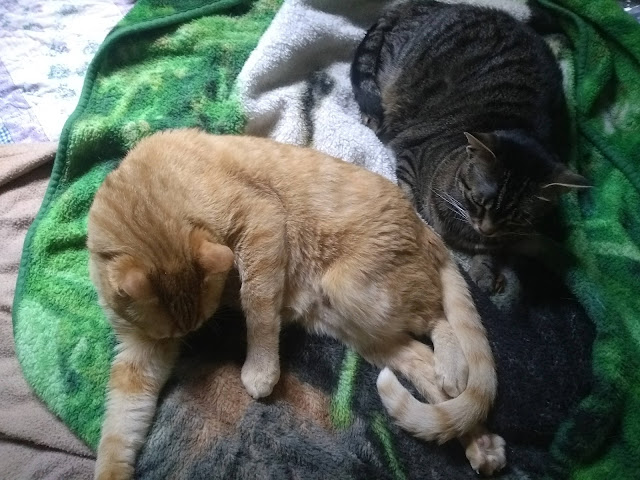 To be honest, Thimble was also using Evan as protection in these photos. What you can't see is Eddy sitting just beneath Evan in these photos. Eddy likes to troll and pick on Thimble, but she won't usually do so if Evan is between them. Thimble is very grateful for that.
***
Last but not least, how about we share the fill-in statements for tomorrow's Friendly Fill-Ins challenge? Ellen of 15andmeowing came up with the first two, and I came up with the second two.
1. My latest obsession is _________.
2. I am so over _________.
3. I'm skilled at _________.
4. I'm not very good at _________.

We'll see you tomorrow, friends!
***
Tip of the Day
Today's tip is a common sense sort of one that you all certainly know, but we thought we'd mention it anyway. This tip is, for your furbaby's health and safety, to be aware of the various parts pieces of any toys and games you have in your house. Our poem today talked about the game of jacks, and that's an example of a toy or game with parts and pieces that could be dangerous if a curious cat or dog decided to chew on or swallow them. This could also go for rolling dice, other various pieces that go with certain board games, some children's toys such as Legos, and so on and so forth. If your cat or dog is a chewer, or if there is any concern at all that they might chew on or swallow toys or game pieces, then simply keep all such toys and games well out of your furbaby's reach. Don't leave such toys and games unattended, and pick them up and put them away when you are done with them. As always, it's better to be safe than sorry.
Posted by The Menagerie Mom at 7:27 AM

Love the story, and the kitties are so cute in their semi-cuddle pose - MOL!

Very fun story-poem, i am glad your cats mostly get along even if they do not snuggle each other much.

Cute pictures! I love how you always incorporate cats into your poems. Would you believe I've never played jacks?

I love jacks! I can't wait to play with my great nieces when they are a little older. That was a fun poem and would make a cute kid's book. Very sweet cuddling photos. Cute drawing and excellent tips too.

That's an amazing poem! I loved playing jacks and marbles as a kid! Now I just collect marbles. I love the art and the cute cuddling pics!

Love your story-poem this week and I had the same thoughts - marbles, jacks, hopscotch, jump rope......so many fun things from the past and I wonder if they are still played in some corner of the world. I have such wonderful memories of those things. Thanks for participating in the poetry challenge every week - next week's is another "cutie" !!