Hello and happy Friday to one and all! Who wants to fill in some fill-ins? If you'd like to join in on the Friendly Fill-Ins challenge but missed the fill-in statements yesterday, we'll share them again here. Ellen of 15meowing came up with the first two, and I came up with the second two.

2. Note to self: _________.
3. _________ is my favorite treat.
4. If I were living in a horror film, I would _________.
My answers are below in bold.
1. I have zero interest in drama.
(I cannot easily maintain or tolerate a conversation with anyone who simply wants to gossip or get wrapped up in drama. I'll pass on that, thank you very much.)
2. Note to self: distribute the heated cat beds throughout the house.
(We're finally reaching truly colder temperatures this weekend. The nighttime lows are now below freezing. We're already running the furnace in the house, but the kitties still seek out warm places to sleep. So, I need to make sure the heated cat beds are all freshly cleaned and distributed throughout the house. They're not electrically heated beds, but they're the kind that radiate the cat's body heat back and warm up that way. They actually work incredibly well, and the kitties love them.)
3. Anything sweet is my favorite treat.
(This goes for both edible sweets and sweet little furbabies. I'll happily snack on something that satisfies my sweet tooth, but I equally enjoy the treat that is cuddling with my sweet kitties and pup.)
4. If I were living in a horror film, I would not run up the stairs and lock myself in a windowless room.
(Why does this happen nearly every time a character in a horror movie is being chased? As a fan of Halloween, I'm also a huge fan of horror films, but at the same time, they frustrate me to no end. If even one person in a horror movie had a lick of sense, the movie would only last a couple of minutes. Then again, I guess that's why the characters in horror movies lack so much logic and self-preservation.)
Now it's your turn!
To add your link to the Friendly Fill-Ins Linky list, just click HERE!
You can also click on the badge below to add your link.

You are also welcome to complete the fill-ins in the comments below,
or in the comments on Ellen's blog, 15andmeowing.
***
I mentioned yesterday how my workplace is a chaotic mess right now, and because of that I couldn't quite find the time to finish my poem before yesterday's Thoroughly Poetic Thursday challenge, hosted by Angel Sammy. I finally finished it, though, so we'll go right on ahead and share that now.

Our host always shares a photo prompt to guide our poetic endeavors. This week's prompt was this image here: 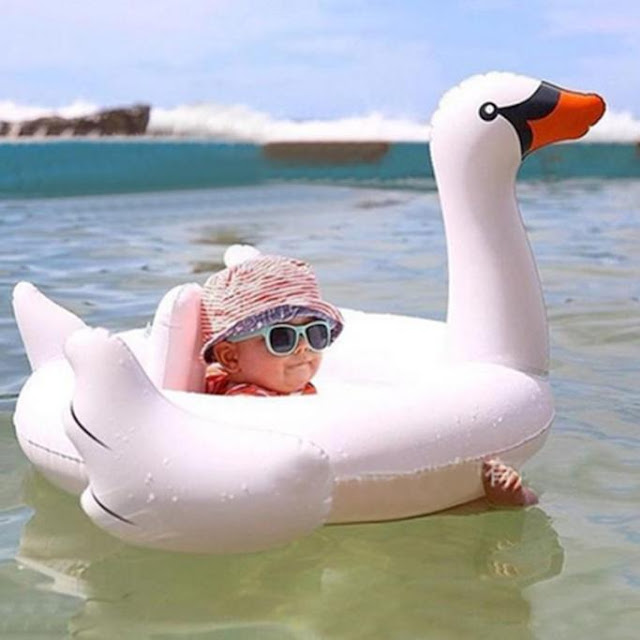 I've mentioned before how, come October, I always feel compelled to create poems that are all shades of Halloween. So, I did some brainstorming on how I might be able to make that there photo prompt work for a Halloween poem. Truth be told, I had to go really vague and simply settle on making sure some sort of white bird was present in my poem. If you're curious how weird my poem is this week, feel free to read on.

There once was a witch with loyal familiars numbering two.
They were a cat and, well, a loquacious little cockatoo.
Sometimes the witch's furry and feathered familiars helped her out.
Other times, they made her scratch her head and doubt.

On one moonlit night, the witch bought a pumpkin from a gardening forest elf.
Upon arriving home, she carefully placed her orange squash on a shelf.
She already had plans to make it a frightfully festive pumpkin,
Though putting a knife in her hand was more or less a sin.

The witch couldn't carve a pumpkin or a turkey to save her life,
Yet she wanted a jack-o'-lantern on that Halloween night.
So the witch grabbed up a spell book and some potions,
And then she placed her favorite cauldron on a table in a swift motion.

The witch opened her spell book to the desired page.
Then in the air her hands and potions she began to wave.
She said this word and that word and into the cauldron poured this potion and that.
She did all of this under the watchful eye of her cockatoo and cat.

As she spoke the words from her spell book,
The cockatoo squawked and jumped until its cage shook.
It looked at the cat and screamed, "Here, kitty kitty kitty!
Kitty goes meow, and I go weeeeeee!"

In response to the bird's words in the midst of the spell,
One of the potion bottles spun and splashed and fell.
The witch's cat flicked its tail and meowed,
And it was a meow quite excited and loud.

"Shush," the witch said.
She could not help but shake her head.
She added, "We've talked about this.
If you two talk and frolic during spell time, it will all go amiss."

Placing a quieting finger over her mouth and looking from her cockatoo to her cat,
The witch resumed her magical endeavor just like that.
She poured another potion into the cauldron and stirred,
And then she spoke all sorts of magical words.

The pumpkin on the shelf began to rock back and forth,
And then it spun east, west, south, and north.
On the pumpkin an eye began to form, and then a nose below,
And then from inside it began to flicker and glow.

The witch smiled, and the cockatoo flapped its white wings.
Then it began to whistle and sing.
It shouted, "Here, kitty kitty kitty!
HERE, KITTY KITTY KITTY!"

The cat jumped onto the witch's shoulder and purred.
The witch sighed but said not a single word.
That is, until she begged, "You two, please hush.
Your interruptions have already been quite enough."

In response, the cockatoo whistled a defaening whistle.
Then the cat shot across the room like a missile.
"Kitty! Where's the kitty?" the cockatoo screamed.
"I said, HERE, KITTY KITTY KITTY!"

That's when the witch's potion began bubbling when it should have been simmering.
She said, "Oh, great, I see.
You two are conspiring against me.
Can I please just whip up a jack-o'-lantern in peace?"

The cockatoo's answer was a distinct and deafening, "NO!"
A few more exclamations it did screech and bellow.
Then it returned to its chant of, "Here, kitty kitty kitty!
I said, HERE, KITTY KITTY KITTY!"

The witch's cat pranced and danced around the room.
Here, there, and everywhere it did dash and zoom.
The bird itself danced on its perch in its cage,
All while a great many words it did shout and say.

The witch's potion began emitting bubbles, and then some more.
The events in the room were anything but a snoozing bore.
The pumpkin on the shelf jumped and spun and then its carving was complete,
But it was certainly not carved in the vision the witch had seen.

The pumpkin did not have moon-shaped eyes or a toothy grin.
Rather, it had whiskers and pointed ears atop its orange skin.
The witch said, "Good grief, what on earth is that?"
The witch's cockatoo, with the cat's aid, had turned the pumpkin into a cat,
A fact that made the cat purr and the cockatoo laugh. 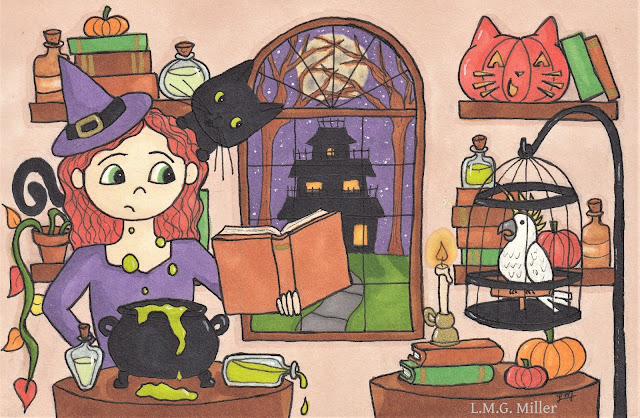 ***
If you visited us earlier this week, you might remember that Evan is giving all sorts of reading lessons, and he has been assigning his furry siblings some Halloween tales. Since Eddy loves her some Evan, she decided to add both of Evan's suggestions to her personal library. 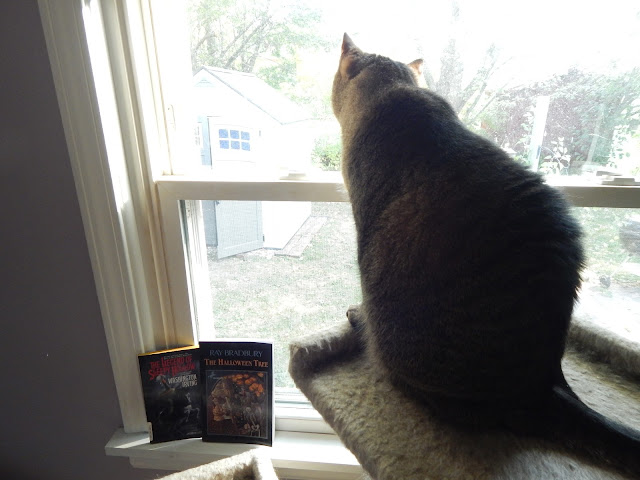 Washington Irving's "The Legend of Sleepy Hollow" and Ray Bradbury's The Halloween Tree have been Evan's recommendations for Halloween reads, so Eddy got her paws on both. 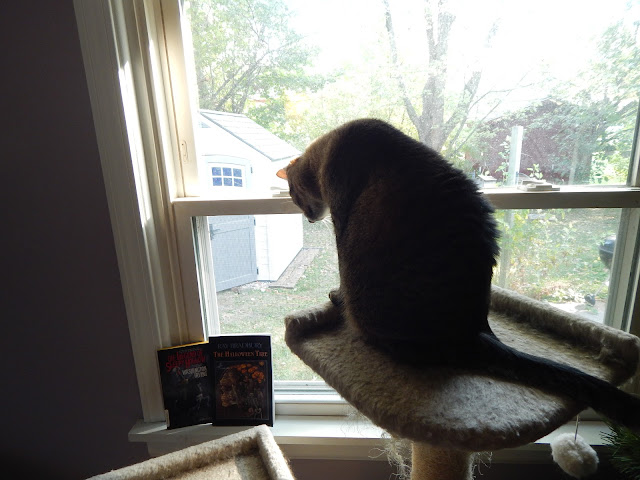 Which one do you think Eddy will read first? She'll let you know next week.

***
Tip of the Day
We talked about sparing unwilling furbabies from dressing up for Halloween, and about selecting safe costumes for those furbabies who do enjoy dressing up. Today, we're here to remind you that, if you yourself are planning on donning a costume for Halloween, to again take your furbaby into consideration. Any costume worn by yourself, or anyone else in the house, should be safe around your kitty or pup, such as by being free of parts and pieces that a kitty or pup might chew or ingest and thereby put themselves in danger. Earlier in the month we also talked about the toxicity of items such as fake blood, so of course it's safest to refrain from including that in any costume you wear, or to only use it when your furbaby is not around.
Aside from costume dangers, also keep your furbaby's comfort and happiness in mind if you have any sort of costume for yourself. Wigs and masks, for example, might scare some cats or dogs, especially those who are already skittish. It's not only important to ensure that any costume you wear is safe around your furbaby, therefore, but that it also does not scare them.
Posted by The Menagerie Mom at 2:23 AM

That poor witch, no cooperation. That was a fun poem, and great answers! Thank you for hosting.

What a wonderful job you did working a little Halloween magic into your poem this week. Well done.....it's such a cute photo but I'm wondering how you will work Halloween into next week's bowling photo? A haunted bowling alley purrrrrhaps? Tee Hee

Great fill-ins and supurr pics! Oh thanks for #2 forget, we have those here and must get them out as the nights are getting much cooler. Happy Friday! XOX

Great pics and great fill ins! Have a great weekend!

Hey Dad where are our heated beds? Huh? Where?

Enjoyable story poem!
I set up a heated beddy for Sweetie, but she acts like it's not there.
The Hubby, however, is determined to find the purrfect place for it, so she can enjoy the cold weather in a toasty bed!

Eddy, we bet you read the Legend of Sleepy Hollow first.

I love your little library, Eddy. I've often wondered if Mudpie would enjoy a self heating bed. I've never bought one before. She just has lots and lots of blankies.

Great fill-in answers. I need to get some of those warming beds. I am not into drama either- don't even like it on tv. I enjoyed your poem. Great drawing too. And I think Eddy will choose The Halloween Tree being that she is on her tree. Excellent tips. Have a nice weekend. XO