Our wonderful host always shares a photo prompt to guide us as we rhyme. This week's prompt is this fun image here: 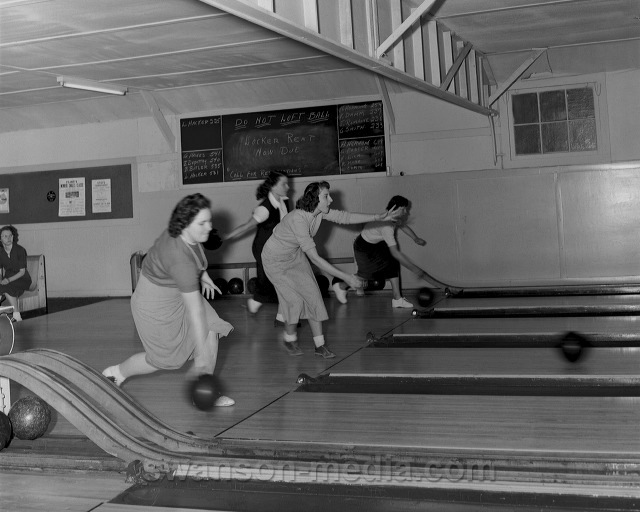 As I've mentioned before, in October I always make my poems all sorts of Halloweeny. This week, I started out with the intention of writing a tale about a haunted bowling alley. That was even the fun and fantastic suggestion our wonderful poetry host made to me. I thought that was a great idea, and so I set out with that plan. As I started writing my poem, though, the story started to change, and I ended up with something I didn't expect. That unexpected poem looks a little like this:

Lily visited her nana on All Hallows' Eve.
In other words, she went to her grandma's house on Halloween.
Her mother had a conference and the babysitter fell through.
So, visiting her grandmother was the only thing she could do.

Lily didn't mind going to her grandmother's house one bit.
After all, her grandma always offered sweet treats, fun times, and wit.
Lily's mother was hesitant, though.
She said, "Perhaps to this meeting I just shouldn't go."

It was Lily who insisted her mother head out.
In fact, if she didn't get to visit her grandma, she threatened to pout.
"I like visiting Grandma," Lily said with a smile and a twirl.
Her mother replied, "I just don't want her putting silly ideas into the mind of my little girl."

Lily rolled her eyes and scoffed.
"Grandma's ideas are never silly," the little girl said with a disapproving cough.
Lily then put on the pointy hat that matched her Halloween costume's witchy robes.
She said, "Come on! To Grandmother's house we go!"

Lily's grandma hugged her granddaughter upon her arrival.
"My dear," she said, "you are such a lovely and wonderful eyeful!"
Lily's mom said, "She can watch movies and eat candy and all of that jazz,
But please, Mother, don't subject her to all of your weird hobbies and pizzazz."

Lily's grandmother waved a dismissive hand.
Then she said, "Run off now and leave me and my granddaughter to have a Halloween jam."
With a sigh and one last look over her shoulder,
Lily's mother finally departed with her old car's rumbling motor.

Lily filled her pockets with candy and went to the door.
"Then let's go," she said. "What are we waiting for?"
Her grandmother smiled yet said, "Your mother wouldn't like that, I'm afraid."
"And why's that?" Lily did frown and say.
"Well," her grandmother replied, "this bowling alley is, well, it's a strange little place."
Lily shrugged. "No matter. Let's go there now, and let's make it a race!"

Lily's grandmother dashed to the closet and threw on a jacket,
Which had THE BEASTLY BOWLING LEAGUE stitched onto the back of it.
Lily thought that team name had quite a nice ring,
Though she forgot all about it when a spooky tune her grandmother began to sing.

On the way to the bowling alley Lily's grandmother taught her more Halloween songs,
As well as wonderfully spooky stories filled with ghosts and eerie fog.
Then, her grandmother said, "Here we are!"
In front of a building called THE BEASTLY BOWLING ALLEY sat the car.

"Before we go in, I must tell you something, my child," Lily's grandmother said.
"And what's that?" the girl asked with a twist of her head.
"You might see strange things inside," her grandma said.
"But I promise nothing in there will make you injured or dead."

Lily shrugged her shoulders as she laughed.
"Now I want to go in even more," she said and exited the car just like that.
Her grandmother added, "I have no doubt you'll enjoy all the spooky snacks.
They're quite delicious, even if they're sometimes a bit scary to look at."

Inside, Lily saw that the bowling alley was decorated with full moons, spiders, fangs, and bats.
Then Lily turned to see they were greeted by what appeared to be a real witch and her cat.
The woman in the pointy hat and robes looked at Lily and smiled.
She said, "You look like me as a child, though that's been quite a long, long while."

The witchy woman then turned to Lily's grandma, and she even knew her by name.
As the two women chatted, Lily turned to yet again survey
She saw bowling balls that looked like pumpkins, skulls, and eyeballs.
One of the bowlers was a mummy, but he was also a dog.

There was a cat like a ghost eating creepy cupcakes at a nearby table,
Then the mummy dog approached it and served a bubbling brew out of a cauldron with a ladle.
Her grandma leaned down and said, "Remember, dear, there's no need to be afraid."
"Afraid?" Lily said. "I'm not afraid. I'm excited! I'm amazed!" 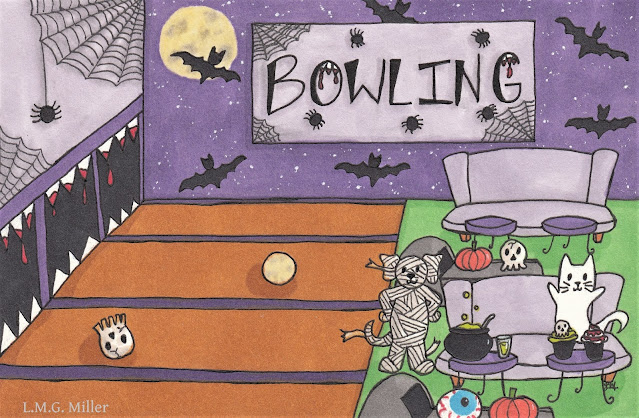 We certainly didn't forget that on Thursdays we also give thanks. After all, it's the day of Brian's Thankful Thursday Blog Hop.

Last week, Thimble expressed how happy she was to have some spooky patrons at her little home library. She's also happy to be able to help them find books to read, including spooky tales this time of year. 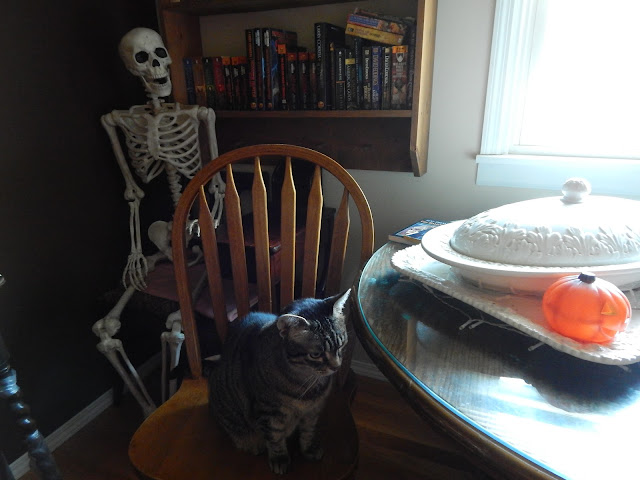 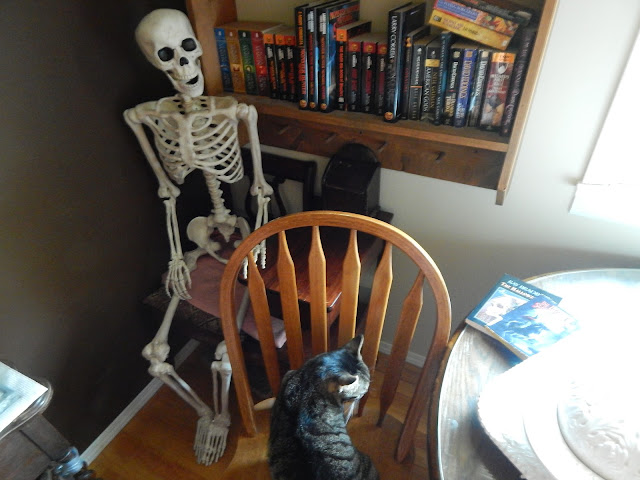 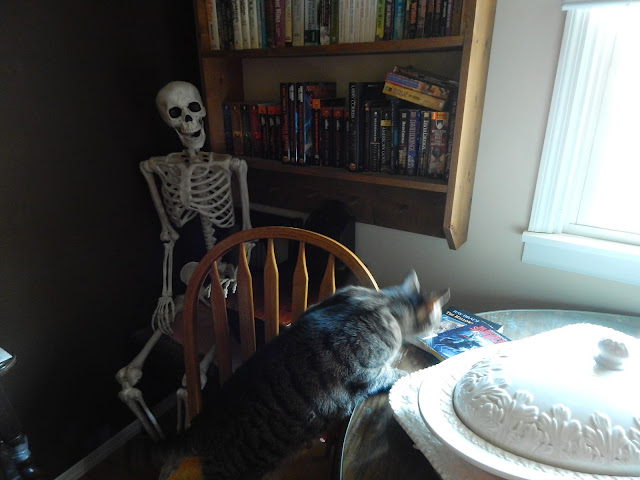 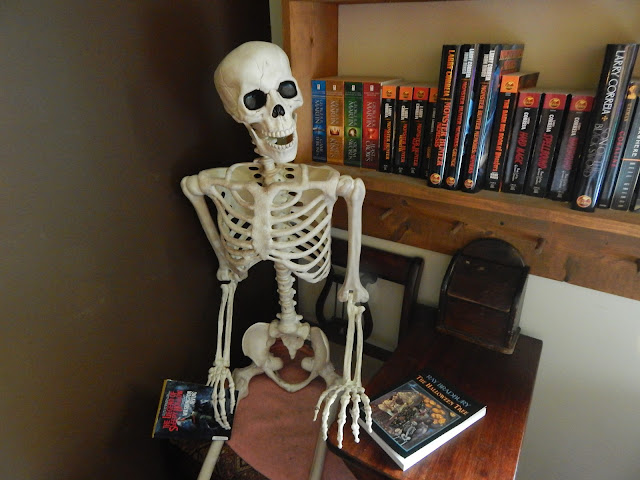 Oh, and Thimble's also thankful she can use her brother Toby as free labor at her little library. He delivers books to patrons, though sometimes in a bit of an invasive way. 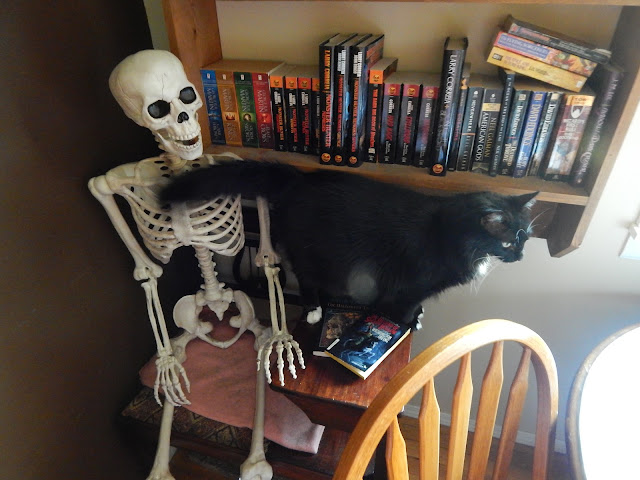 Yesterday we mentioned keeping your kitty or pup in a safe area of the home, away from the door, in order to avoid any escapes out the front door during Halloween night festivities. Today, we're offering some additional methods you might be able to use to help keep a furbaby as safe, happy, and comfortable as possible on Halloween night. These tips are the most beneficial to furbabies who are scared of the doorbell, knocks at the door, and any other noises and happenings that Halloween might bring with it.

To begin, you can help make a nervous or uncertain furbaby feel more secure during the hustle and bustle of trick-or-treaters by closing windows and drawing blinds or curtains, to mask some of the sights and sounds of the spooky festivities. In addition, you can play music or turn on the TV or a movie to help further drown out sounds that might alarm a kitty or pup. Some furbabies might even be distracted by some treats, or by a play session with you or an interactive toy. In some cases, a cat or dog with higher levels of anxiety might benefit from the use of calming products like a pheromone spray or diffuser, or even a Thundershirt or similar makeshift item to make them feel secure. Or, some cats and dogs would simply do well to have access to a safe hiding place in a safe area of the home, where they can ride out Halloween night. The important thing is to consider your particular kitty or pup's personality and behaviors, and then determine what distractions or other techniques might best help them feel safe and secure on Halloween night.

Posted by The Menagerie Mom at 7:36 AM

What a perfect bowling/Halloween poem! Thimble and Toby, you are so good to promote reading with your new friend - what good and beautiful kitties you are.

Excellent story poem!
Reminds me of the days when I worked afternoons, and was on a bowling league in the mornings once a week. So much fun, then I'd drive off to work the rest of the day.

Don't knock him over, Toby! MOL Your poems are always SO fun and creative!

That's quite some bowling tournament, and i am very thankful for books always, too.

I LOVE the poem and drawing to go with it. Toby is an excellent helper, Thimble is lucky. Great tips too. XO

You sure "knocked it out of the ballpark" with this week's poem! It's fabulous and fun and PERFECTION for Halloween. Interesting where our creativity heads when given a "suggestion" and is allowed to take wing in whatever direction it wants - I love this AND the accompanying doodle. Thanks for always surprising us with totally wonderful story-poems every Thursday.