It's Tocktober, and today is the prime day of said Tocktober. This day became what it is because of Angel Derby, whose family you can visit over at the blog known as Just Ducky. Angel Derby was born on October 20, 2003, and it's in his honor that Tocktober began. 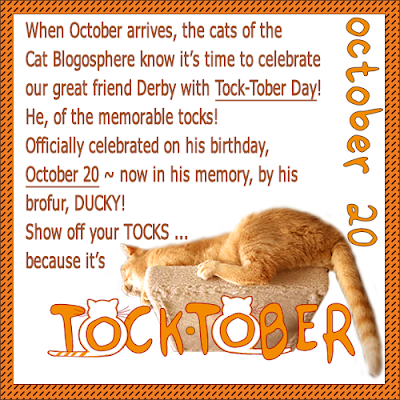 So, do we have any tock shots to share today? Eddy does. Some of blooper queen Eddy's favorite bloopers involve her showing off her tocks instead of looking at the camera. Today, we're sharing just a couple of those tock shot bloopers. 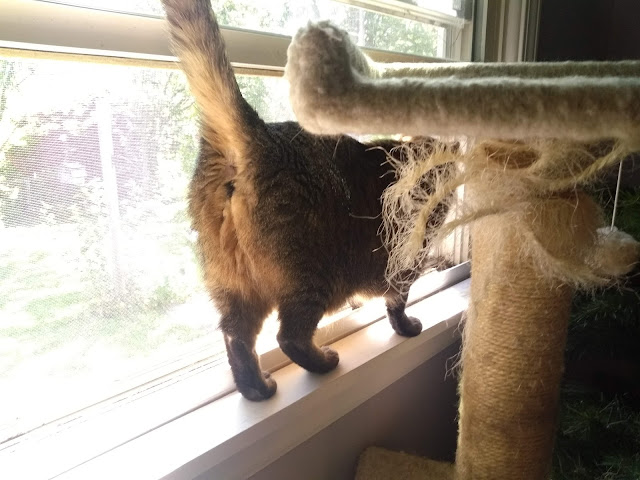 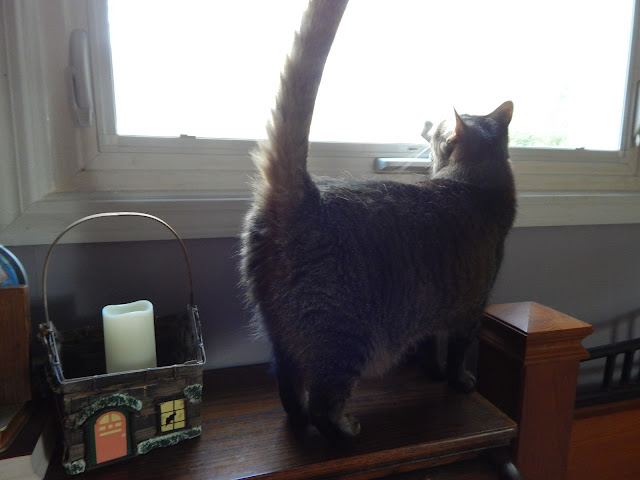 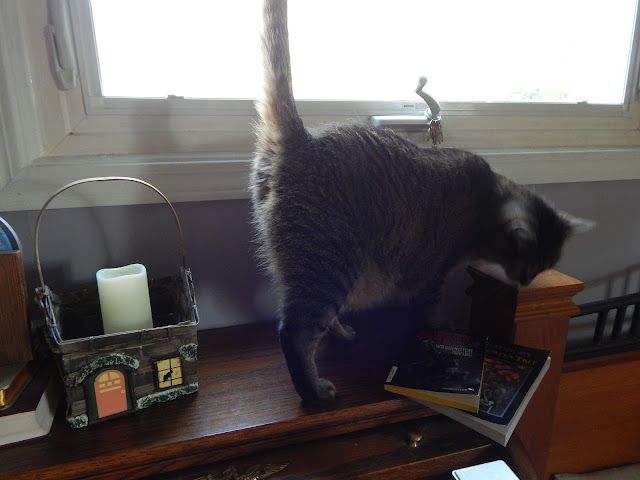 That last blooper tock shot from Eddy was taken during a photo shoot with some of our Halloween reads for the month of October. That segues us into the next part of this post. That is, the moment Tonks gives you her book review on Washington Irving's "The Legend of Sleepy Hollow". 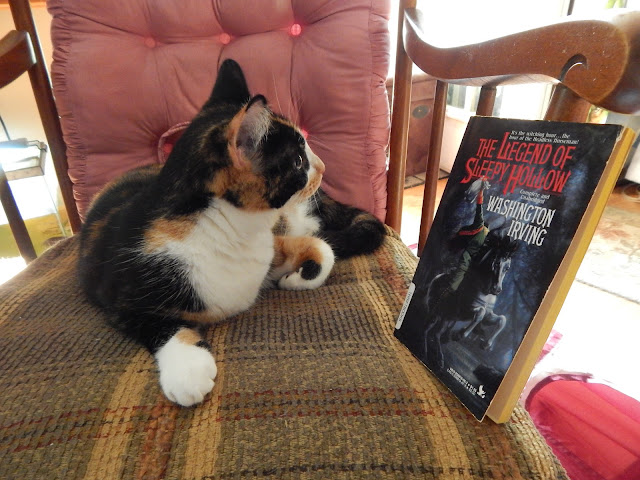 Does anyone remember how, last week, our resident reading teacher Evan assigned Tonks the very book about Ichabod Crane and the Headless Horseman? Tonks promised to be back this week to let you all know her thoughts on the spooky tale. And Tonks made those thoughts very clear. Well, she actually made her true thoughts known in a couple of very blurry bloopers. 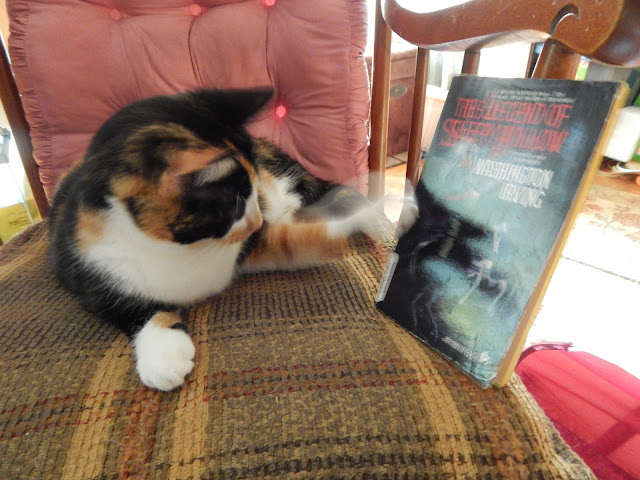 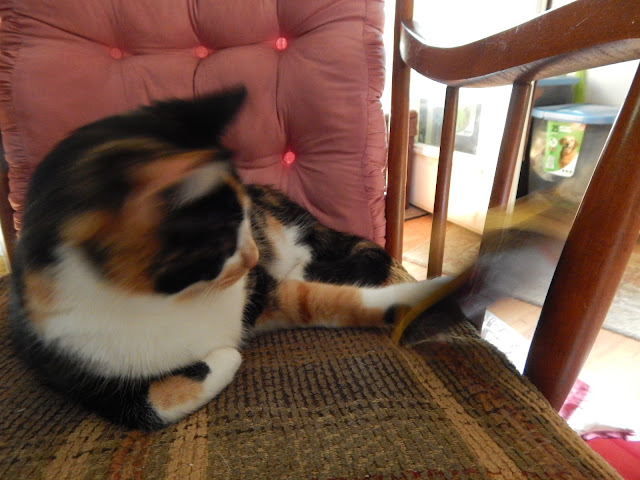 Did Tonks make her thoughts clear enough? How about now? 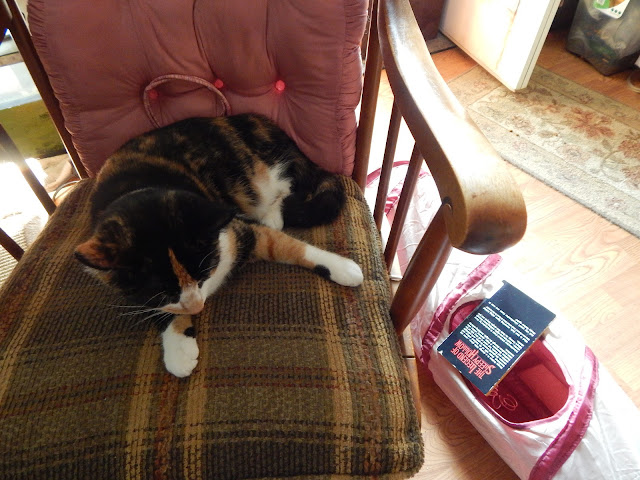 While this here human very much so enjoys "The Legend of Sleepy Hollow", clearly Tonks does not. She says it's too scary, and that there aren't nearly enough cats in the story. Is that a good book review? Tonks thinks it's more than good.
Happy Tuesday, friends!
***
Flashback Doodle of the Day
We're finishing up sharing some flashback Halloween doodles from last year so that we can share brand new Halloween doodles every single day of Halloween week. Today's flashback is another one I scribbled up last year in honor of a couple of famous horror films. Of course, horror doodles or not, they would not be complete without cats. 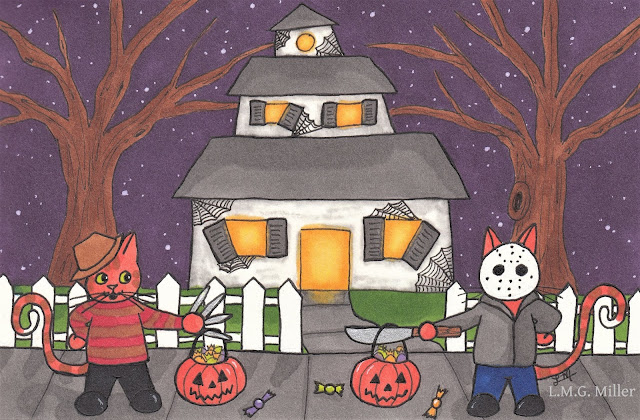 ***
Halloween Tip of the Day
Just yesterday, we gave the tip to avoid walking your pup or kitty on Halloween during trick-or-treat hours, in order to avoid the increased foot and road traffic that could lead to dangerous situations. On the other hand, today's tip involves some ideas for staying safe should you and your furbaby find yourselves out and about on Halloween night. If you're out on a walk on Halloween night, or any night for that matter, be sure to take a flashlight, as well your cell phone in case of emergency. At the same time, though, don't be distracted by using your phone instead of observing your surroundings. What's more, ensure that your furbaby's leash and collar include reflectors, and that you yourself are wearing reflectors in some way, so that both of you can remain seen and safe.
Another important factor if walking with your furbaby on Halloween night is to know where it might be safest to walk. Obviously, dark alleys are not the way to go, but you also want to ensure that you don't end up with a scared furbaby on the busiest trick-or-treating street. So, if you must head out for a stroll with your furbaby during trick-or-treat hours, think ahead about what route you should take. As we previously hinted, it should be a safe, well-lit area, but also one that won't be hustling and bustling with trick-or-treaters. This is especially important if the pup or kitty being walked is skittish or aggressive in any way. All in all, think ahead and make plans for where you can most safely take a walk with your furbaby should you need to go out on Halloween night.
Also, one last note we want to make is to watch your furbaby closely when walking them on Halloween, as well as on the following days. Trick-or-treaters might leave behind candy, candy wrappers, parts of costumes, or other unsafe goods. So, do keep an eye on that furbaby and make sure nothing unsafe makes it to their mouth when walking during the Halloween season, and year round.
Posted by The Menagerie Mom at 2:20 AM

What cute tocks! And Tonks...we can see that the only thing that book is good for is whapping. ;)

Lovely tocks! There should be more cats in that story, you're right Tonks!

Love the Evan Tocks and that is a fine review too

Very nice tocks Eddy. And Tonks, you are too funny. Cute drawing and excellent tips.

It's one of the cutest days of the year! Tonks, you have a bright future ahead of you as a book reviewer!

And we guess Tonks doesn't want to read that book. :D

Eddy, that's a great way to show off your tocks.

Maybe it was Ichabod who pushed the book off?