Happy Thursday! We're here to rhyme, which is easy to do thanks to Angel Sammy's Thoroughly Poetic Thursday challenge. 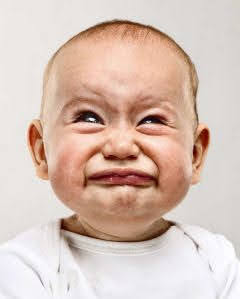 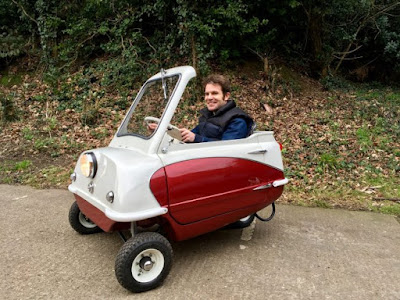 Cutting right to the chase, here's the weird little poem I scribbled up to try to meld those two prompts together:

Young Matilda had an errand to run.
It was going to be a great deal of fun,
But it was also, to her, a serious one.
It was a task that really just had to be done.

Her intended destination was neither near nor far,
And so Matilda jumped into her pink car.
It did not matter that she was a girl aged only 5,
Or that her car only traveled on the sidewalk at a height knee-high.

Her parents would not let her travel without a chaperone,
And so with her went her babysitter of a cat named Tyrone.
After some number of minutes driving in her plastic car,
Matilda and Tyrone arrived at their destination that was neither near nor far.

She parked in front of the brick building,
The front of it adorned with a sign that read LIBRARY.
"Come on, Tyrone," Matilda said as she walked to the entrance.
"Mom and Dad won't let me go inside with my babysitter present."

And so Matilda and Tyrone made their way inside,
The library offering the sight of books upon books to their eyes.
The little girl could not help but smile.
Who wouldn't be happy when presented with books spanning miles?

An old man of a librarian with a smile of his own appeared,
Saying, "Well, hello there! How can I help you, dear?"
Not one to waste time, Matilda cut right to the chase.
She said, "I need a book with a good story and a quick pace."

After a few more questions here and there from the old man,
Matilda further explained, "I'm here because I have a plan.
I have a little sister who is 1-year-old and named Jan.
The problem is that she never wants to sit and read.
But if she doesn't read, how will she succeed?"

"Ah, I see," the nice old librarian said.
He turned to face a certain bookshelf, nodding his head.
He added, "So you need a book that your baby sister will enjoy?
A book that will enthrall her more than even the most exciting toy?"

Matilda was glad the old man understood what she needed,
That he seemed keen on making sure she and her sister succeeded.
That is, until he brought out his choices,
Which caused Matilda to let out some startled noises.

"The Lorax?" she shrieked when he handed it over.
She added, "This book is about all sorts of sad horrors.
Don't get me wrong, I'm a big fan of good ol' Seuss,
But this will make my sister cry and feel quite blue."

And so the librarian handed her another option,
Which Matilda also approached with caution.
Frowning, she said, "The one where the poor little pig loses all of his friends?
Does the sadness and trauma have no end?"

As the librarian tried yet again to pick a book from his shelves,
Tyrone the babysitting cat trotted to his side, as if to help.
The librarian brought over another book, and it was bad.
Matilda said, "I want books to make my sister feel happy, not sad."
That was when Tyrone pawed a book off a shelf and slapped it across the floor,
Almost hard enough for it to fly right out the door

Picking up Tyrone's book choice with a smile,
Matilda thanked the old man, who she learned was named Giles.
She said, "For your time I want to thank you,
But now I must bid you farewell and say too-da-loo!"
Holding up the book in her hand, she said, "This one will do.
And so goodbye, for I'm off to read my sister Everyone Poops." 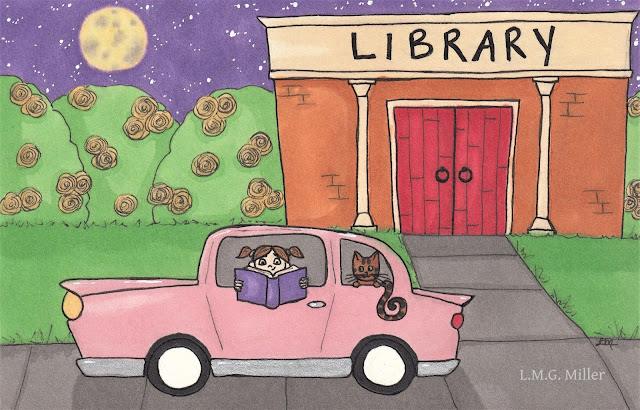 I'm not the only one who read the book Everyone Poops as a child, am I?
***
Let's get right on with Brian's Thankful Thursday Blog Hop now, shall we?

Today, Thimble is yet again grateful for the summer sunshine! 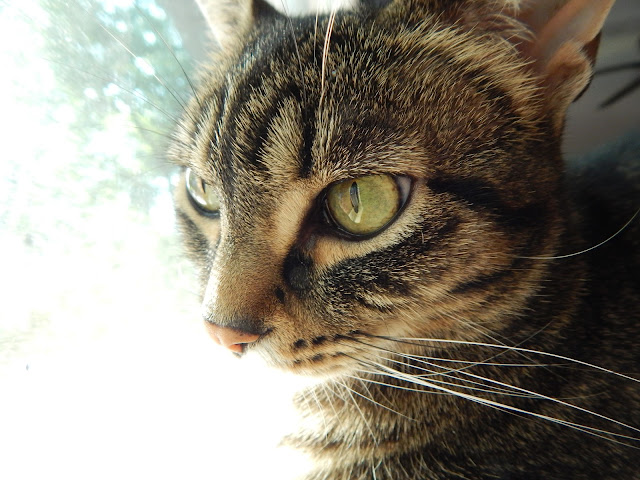 We'll see you tomorrow, friends!
***
Tip of the Day
The past couple tips in our summer safety tips for strays and ferals have been all about water. Guess what? Today's tip is about water as well. Since water is such a crucial aspect of survival, especially in the heat of summer, we thought we'd give it one last hoorah. Today, we're specifically talking about water bowls.
Water bowl preference can of course play a part in any cat's life. We've talked before about whisker fatigue, for example, and how this often causes cats to prefer wider bowls, as these won't cause them to bump their whiskers while getting a drink. That being said, though, when it comes to offering water outdoors in the heat, keep in mind how the shape and size of the water bowl can play a part. For example, did you know that evaporation happens more rapidly when water has a large surface area? This is why water in wide, shallow bowls will evaporate relatively quickly in the heat. To combat this, try to offer water in bowls that are narrower and deeper. Of course, do try to ensure that the bowl is not so narrow that it makes drinking impossible or difficult, but also try to ensure that a bowl has a decent chance of combating evaporation.
In addition, consider the material out of which the bowl is made. This one can be a bit tough when it comes to offering water to strays and ferals to hot and sunny days. We've talked before about how stainless steel bowls are often a good choice over plastic bowls, since plastic bowls can get scratched and thereby more easily harbor microbes. But, as you all surely know, metallic surfaces can get pretty darn hot in the summer heat. Especially if a bowl is in the sun or on a hot surface, a metallic bowl might not only cause the water to become uncomfortably warm, but the bowl itself might also become painfully hot to the touch. This is best prevented if the bowl is placed in a cool, shaded area. You can also, if possible and safe, try using sturdy glassware as outdoor bowls. This is of course only reasonable if breakage is unlikely to occur, though, as broken glass is indeed a danger.
In short, take anything and everything possible into consideration when trying to help strays and ferals remain safe in the summer heat. This does indeed include their water bowls. Aim for bowls that will prevent rapid evaporation, but that will also be easy and safe out of which to drink.
Posted by The Menagerie Mom at 10:00 AM

Sorry, dear...not a book that I read!
I recall a huge book of Aesop's Fables.

I love how you blended the two prompts! We've had heavenly 60s and 70s this week...but fear the heat is lurking right around the corner.

Excellent poem with the double prompts. I am too old to have read it as a child, but I am familiar with it. :) Did you have a pink Barbie car ? My niece is around your age and we got her one when she was 4. She had her 1st car accident running it into the house. Great shot of Thimble and excellent tips.

You've made me grin with that poem. My kids read that book.

Thimble is beautiful in the sunshine.