As we're sure most of you already know, today is Remember Me Thursday. The Remember Me Thursday website has often explained this day with one poignant sentence: "Remember Me Thursday is a global awareness campaign uniting individuals and pet adoption organizations around the world as an unstoppable, integrated voice for orphan pets to live in forever homes, not die waiting for them." Just like most of you, around here we are huge proponents of adopting cats, dogs, and other companion animals from shelters and rescues. That's why our post today is indeed centered around this significant topic. 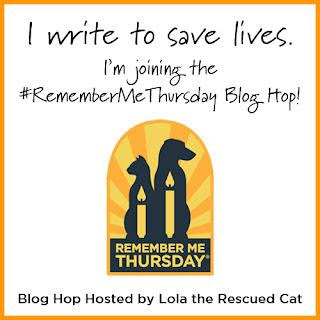 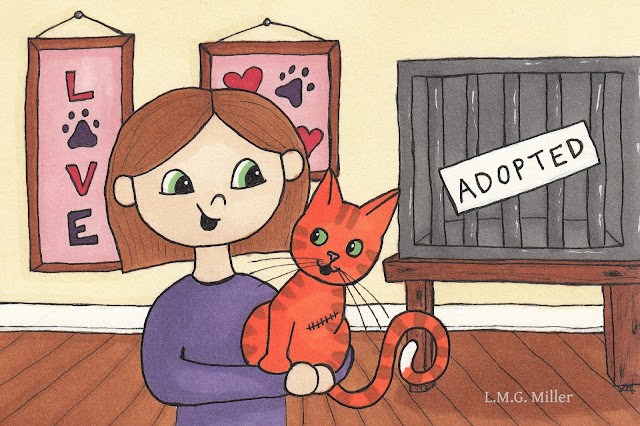 Now, it seems perfectly timed that Brian's Thankful Thursday Blog Hop always falls on Remember Me Thursday, given that both take place on, well, Thursday.

I am of course beyond thankful for all of my furbabies. All of them are rescues, though only one of them was actually adopted from a rescue group rather than stumbling into my life by other means. The furbaby I actually actively adopted is none other than Eddy, who is a sort of specially abled kitty herself. 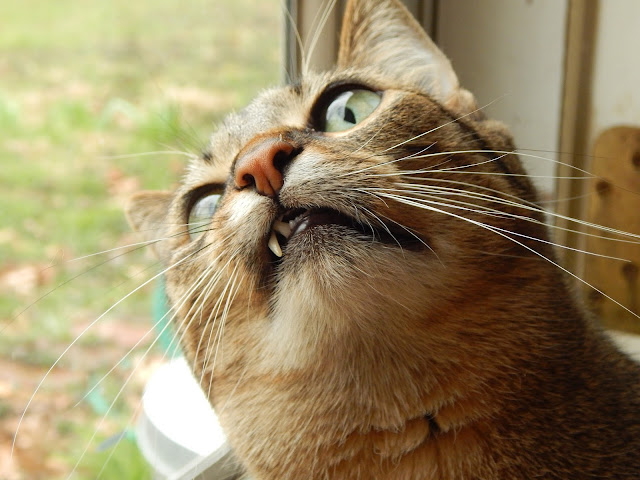 As many of you might know, when I adopted Eddy, she was suffering from some sort of acute neurological issue that appeared just a day or so after the rescue trapped her. She walked and ran in circles, had a head tilt, had right-sided facial nerve paralysis, and all that neurological jazz. I was actually seeking out a special needs kitty at that time, as I had just recently lost my geriatric angel Rosie and wanted to give another special needs kitty a home in Rosie's honor. And so, I became Eddy's mom. She has since recovered from her major neurological issues, though she did adorably retain her head tilt and facial nerve paralysis.
Want to see a photo of Eddy at her first appointment at our vet? Of course you do. 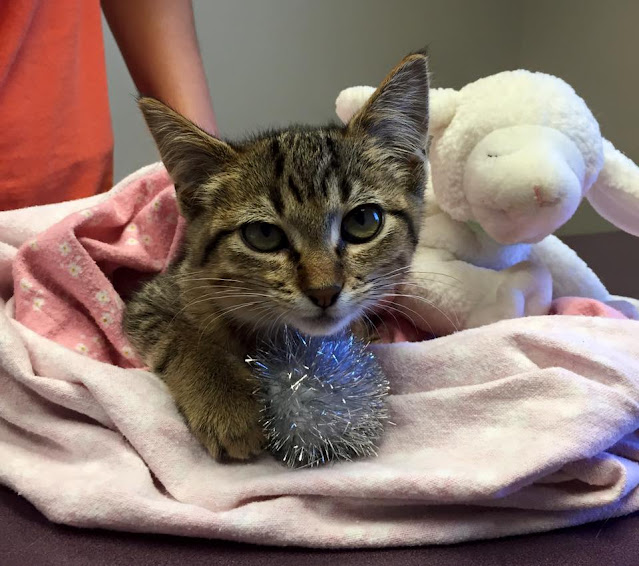 That little lamb there behind Eddy was her little buddy when she was a young kitten. He had to be retired (and bleached) when he kept being dragged into the litter box by Eddy, but now he's tucked up in a closet for safe keeping. But I digress.
All that to say, Eddy and all of my rescue furbabies have brought me endless joy in life. Cats, dogs, and all animals in shelters deserve the chance to show just how much joy and love they have to offer. Because it's a lot. Today and every day, we are purring, woofing, praying, and doing our best to spread the word in order to help all animals in shelters and rescues find forever homes. They deserve it.
***
We were going to share our poem for Angel Sammy's Thoroughly Poetic Thursday challenge, but unlike in years past, I somehow forgot to tie it in with Remember Me Thursday. I don't want to take away from this day intended for the animals in need of homes, and so we'll share our poem tomorrow or Saturday.
Before we go, though, here are the fill-ins for tomorrow's Friendly Fill-Ins challenge. Ellen of 15andmeowing came up with the first two, and I came up with the second two.
1. Every fall I _________.
2. It is never too early to _________.
3. I would describe my lifestyle as _________.
4. _________ requires a lot of patience.

Did you know?
In honor of Remember Me Thursday, how about some facts on animal adoption?
Did you know that the average cost per day of basic pet care is only an approximate $3? That's less than luxuries like fancy drinks from coffee shops.
Did you know that roughly 25% of shelter dogs are purebred? Breeders are not the only source of purebred animals, because both purebreds and amazing mixed breeds can be found at shelters.
Did you know that a vast majority of shelter animals are already spayed or neutered and up-to-date on certain vaccinations prior to adoption? That means you'll pay the adoption fee and thereafter won't need to schedule or pay the typical cost of a spay or neuter or certain vaccinations.
Did you know that animals can make our lives happier and healthier? Science has proven this on multiple occasions.
Some of the above facts are ones you animal lovers out there certainly already know, and some are ones we've already shared in the past. Now we need to spread the word. Shelter animals have so much to gift us. They are special and filled with love. Let's get them out of shelters and into homes.
Posted by The Menagerie Mom at 10:02 AM

Adopted is our favorite breed!

All cats should have wonderful homes and especially ones with special needs!

It takes a special mom to have special needs rescues. We've bottle raised a couple of special needs kittens, and made sure they got fabulous homes.

Your babies are all so lucky to have you. That baby photo of Evan is to die for!!!

I love your drawing. And Eddy is a cutie. Thanks for spreading the word on pet adoption. XO

We former shelter kitties are thankful for all the folks who spread the word on #RememberMeThursday❣️
Purrs & Head Bonks,
Alberto, Oliver & Lily

Thank you for adopting Eddy and the rest of the Menagerie. They are all so fortunate to have such a loving forever home!