I realized that I haven't given any recent updates on the benign (yet meddlesome) tumor on my sister's and my pup Astrid's paw pad. 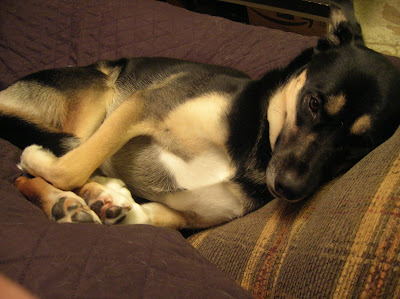 Well, as a briefer refresher, Astrid's vet had said that such a tumor (called a histiocytoma) usually goes away on its own. The thing is, that can take 14-16 weeks. We have roughly three weeks under our belt since were were told that, and the tumor is indeed still present. On most days, it looks healthier and far less raw than it did when we took her to the vet. But, at the same time, the tumor is still at least the same size as it was when Astrid was seen by her vet. And, if aggravated, the tumor will occasionally still open up and bleed a bit (although nowhere nearly as badly as it did a few weeks ago).

That being said, as per her vet's recommendation, so as to keep the tumor on her paw pad from becoming aggravated during the healing process, poor active Astrid is not getting many walks. My sister and I had discussed with the vet getting booties for Astrid to wear, if she would tolerate them, so that she could go on walks. And so we did indeed get booties. But, our slight drama queen of a pup does a sad little tarantella each time the booties are put on. She usually ends up with either no booties on, or bootied but hopping along on only two or three legs.

So, unfortunately, the booties are not proving all that useful, and so Astrid is still not getting many walks. Being a young and active dog, Astrid understandably gets a bit restless without her usual exercise regimen. So, for now, Astrid gets lots of car rides to give her something to do. She also loves to visit her pawpaw and gammy (my parents), which gives her something fun and exciting to do (because Pawpaw and Gammy are two of the most pawesome people in Astrid's world!). We've also been getting her new chew bones and toys to keep her busy inside the house.

All in all, Astrid is doing well. She's still her happy, buoyant self (which, mixed with her puppy bed rest, makes for some interesting days here at our house). She loves going on her car rides and chewing on her new bones. And, once she finally does settle down, she also loves having an excuse to put her feet up and relax. 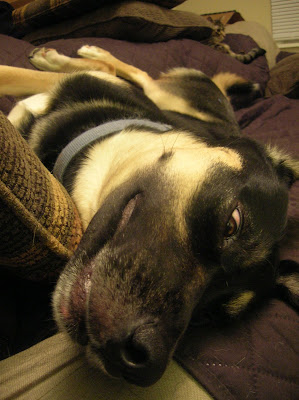 Wish us continued luck in keeping this young little lady calm and collected during the healing of her poor little paw!

And, of course, Happy Friday, everybuddy!
Posted by The Menagerie Mom at 7:06 AM

It must be so hard for Astrid to not get her regular exercise and must be hard on you and your sister too. It's a shame about the booties. It sounds like she's slowly healing. It just takes time. I was glad to read an update and see the cute pics of her.

Thank you so much for the update on your precious Astrid. We are glad to hear she's doing generally well, and we are continuing to purr and pray that that pesky tumor will heal up soon.

Poor Astrid, I hope she is better soon. That must be frustrating for her not to get to go for walks.

We're purring for Astrid and sure hope that meddlesome tumor goes away soon.