This year, just as last year, my biggest Santa's little helper during gift-wrapping was this guy: 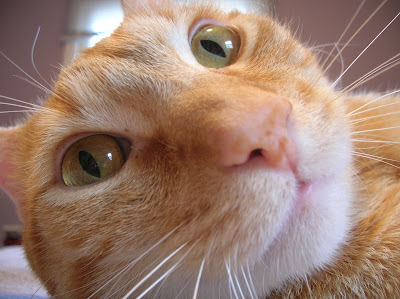 When I'm playing Santa, Evan is always so willing to inspect the wrapping paper for me, test out all the boxes, and just overall give me some up close and personal company. I like to call him my little elf, which is perhaps what compelled me to create this little elf for my Christmas art yesterday, which was the Fourth Day of Christmas: 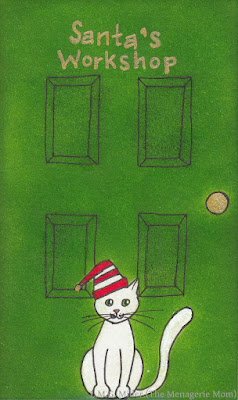 Evan isn't my only little helper, though. I have some baking assistants as well, which I gave you a glimpse of in the recent post about our Christmas festivities. Remember this picture? 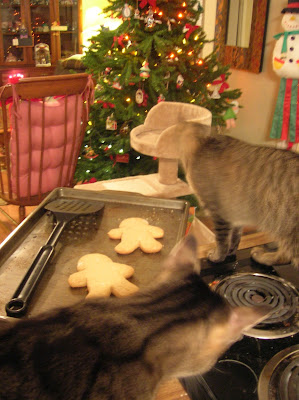 This is just one of many examples of how Thimble and Eddy (most especially Thimble) like to help me cook, bake, and just overall serve as kitchen counter ornaments. Sometimes they like to do solo kitchen work, and I'll often later find the evidence of such endeavors of theirs. Maybe, just maybe, my little ladycats were the inspiration for me to illustrate the downfall of Santa's milk and cookies for today's Fifth Day of Christmas art: 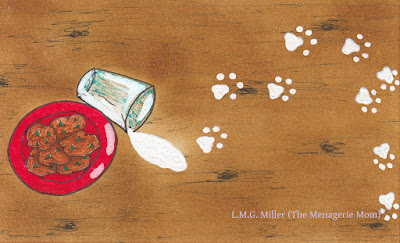 I hope everybuddy has a very merry Fifth Day of Christmas!
Posted by The Menagerie Mom at 6:56 AM

May we suggest to wipe your paw prints up if you don't want your Mom to moan about spilt milk!!
Luv Hannah and Lucy xx xx

What a cute picture! We like to "help" too, though our help is never appreciated, it seems.

That is so cute. Kitties love to help with everything.

You do realize how lucky you are to have such helpful helpers! And cute ones at that!

Purrz,
Katie and the Katz

I love that picture with the tell-tale paw prints!

All your helpers are so adorable. :)

Your artwork is simply adorable. Evan the elf is too cute for words, and the milk paw prints just killed me!!!

We love that helper-inspired artwork!

I love your artwork! So cute.

We love to help too ! Your artwork is very cute. Purrs

we love your artwork too!

Looks like lots of helpful fun. We had a gweat Christmas. Hope you have a gweat New year.