I've noted before how I am extremely fond of and drawn to special needs animals. There's something about the strength and courage that these special little creatures exude that just speaks to me.

There are days that I might feel down and out because of a long day at work, because I get out my phone to find that its battery has died, or because I'm thirsty and open the fridge to find that my only gallon of milk has spoiled. You know, the petty things in life. Then I look down at my boy Evan, who, though hind limb paralyzed, never fails to run to the door to greet me with the happiest of meows, and who spends his evenings running around and having the time of his life without a second thought regarding his unusual circumstances. Talk about a lesson on those lemons that life throws at you. Is it any wonder that Evan is my hero?

Though he certainly lives life to the fullest, I would be lying if I said that Evan's special needs don't leave him with the occasional struggle. It's the way Evan handles these struggles, though, that speaks volumes to me. Because of his paralysis, he can't jump, but instead of giving up, he uncomplainingly uses stools and other elevating maneuvers to get wherever he pleases. Then there are times like a couple months back, when Evan obviously rolled his hind limbs over something sharp or abrasive, and so ended up with some open sores on his underside. 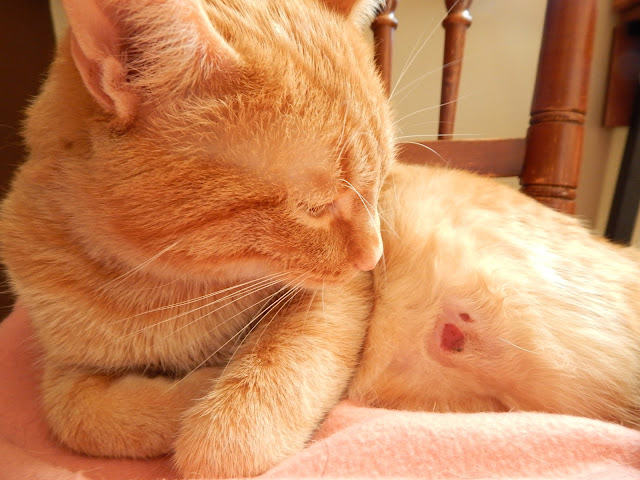 Evan, never one to complain, didn't say much of anything about it. I only noticed the sores when he was snoozing with them exposed. I discovered them and felt like crying, worried that he had cut himself on a loose floorboard or some other area in the home that I neglected. Evan, on the other hand, kept on running and playing and snoozing like he never knew a bother in the world. Luckily, these sores appeared right around the time of his annual visit to the vet's office, and so of course I showed them to the vet. 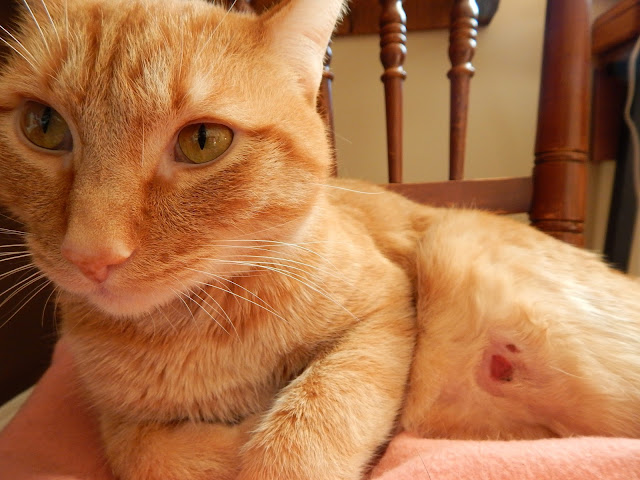 I have learned over the years that Evan simply does not tolerate bandages being put on him. Nope, he does not tolerate that at all. His vet knows this, and so to help the sores heal, rather than bandage them, she gave him an injection of antibiotic and sent me home with a special cleanser. 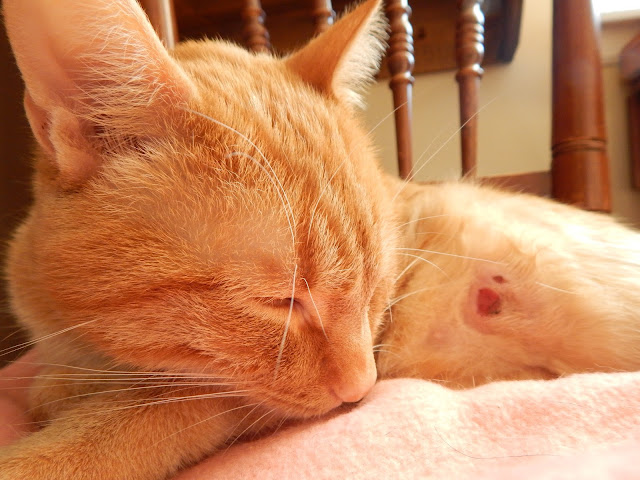 Evan, the good boy he is, let me clean his wounds and took it like a champ. While I would look at his sores and coddle and cuddle him when they looked raw and red, he would act like they didn't even exist. Meanwhile, I found any and every area of the home that might even just possibly abrade Evan's exposed underside and fixed them or covered them up with rugs. After lots of such redecorating and wound cleansing, guess what? Evan's sore are just about all healed up now! 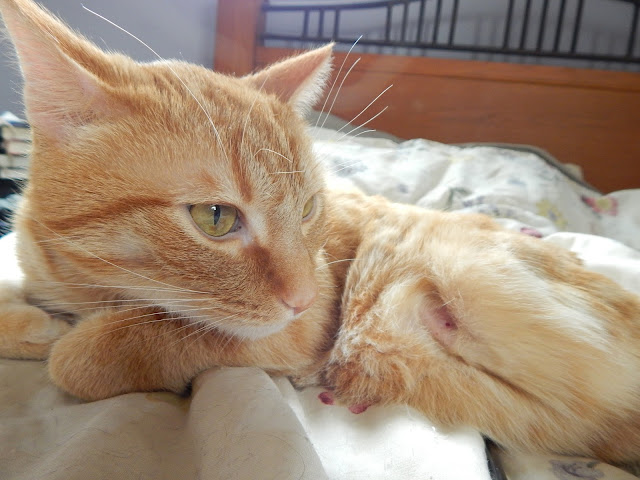 See? Actually, it's sort of hard to see here, as Evan curled his legs to hide that permanent bald spot he's had since kittenhood. But his sores are indeed nearly all healed up, with no rawness or bleeding to note, and that makes this momma one happy lady.

It never ceases to amaze me the strength and courage the animals around us display, especially those with special needs. I feel like I could observe these amazing creatures for my entire lifetime, and still never stop learning from them. They're just that amazing, our furbabies are.

Well, now that you got a fix of our musings on this Monday, we're wishing you all a marvelous day! 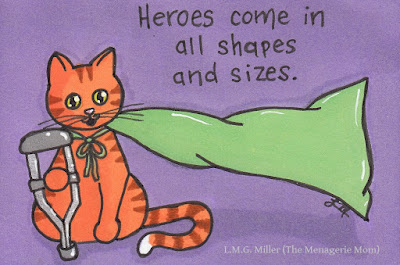 You are one tuff mancat Evan!

Evan, you sure have one great Mom that takes such good care of you. I have always wondered if he rubs the hair off of his hind paws when he crawls around?? He is one lucky boy to have found such a great home. Glad the sore is doing so well.

Aw, Evan. I only adopt special needs cats and may I suggest Vetericyn is a lifesaver for abrasions and wounds. It heals so fast and our special ones deserve a little extra help.

Hi, I am a new reader of your blog and was surprised to discover you are living with a special needs animal. I grew up with two Siamese cats . At the age of 10 the female was hit by a car. She too became paralyzed in the back legs. The vet said she would never walk again and wanted to put her down. My Dad asked if she was in any pain. The vet said no, so my Dad said she is coming home with us. She lived for another 9 years and we all helped her when she needed it. Evan is a very handsome boy and I am so glad he has you to take care of him.
Have a good week!

Poor Evan. But he's such a trooper. We're glad to see that his sores have healed now.

I am glad Evan's sores are healing up. He is indeed a brave boy. I agree that animals can teach us so much, especially how to handle the challenges of life. Evan is such a sweet and handsome boy.

Sweet Evan!!! What a good boy you are, hoping you are feeling better soon! catchatwithcarenandcody

Evan is a super hero. I hope when Summer's Mom starts looking for stories for Rescued 3 that you submit his story. I felt like crying for him too when I saw those wounds, that is amazing that he wasn't even bothered by them. I am glad they are healed. Excellent tip, I have special needs cats, but KaTwo and Snowball are more psychological special needs. Very cute drawing of Evan.

Poor Evan! He is such a brave and strong kitty

Today's drawing is the BEST ONE so far! Bear's taught me so much ... about living one's life with his whole heart ... about not taking one's self too seriously ... about unconditional love. I admire his spirit, pluck, and determination so much. He inspires me every day. We're so glad Evan's almost healed up ... I understand the panic of finding a wound and not knowing how it got there ... if something needs to be fixed so it doesn't happen again ...

I always enjoy reading about your furbabies - but Evan deserves an extra gentle head bonk for his bravery - and his will to keep going !

Your words today brought tears to my eyes. He certainly is a little angel on earth, and you're so lucky to have each other. Animals have so much more courage than we do, and there is so much we could learn from them if we only took the time to try.

Melissa is so right. There is much to learn from Evan. I love how he just keeps going and doesn't complain! He has such an amazing spirit! I'm glad to hear his sores are healing.

Evan is a hero!

I love Evan. He is indeed a hero!

Evan is OUR hero, too!

I'm glad the sores are healing up nicely. I'm always inspired by animals especially those with special needs to make the best of things and show such incredible strength and courage.

Animals are sos stoic. Mau never made a peep when he'd been bitten by another animal. I am so pleased that he too is now healed and his fur is almost grown back. Poor Evan. So happy you found these wounds and were able to take care of them. All those who care for special needs animals are saints. XOCK, Lily Olivia, Mauricio, Misty May, Giulietta, Angel Fiona, Astrid, Lisbeth, Calista Jo and Cooper Murphy