Pup Astrid got to try out some tasty food toppers last week as part of the Chewy.com Blogger Outreach Program. Now, it's the kitties' turn. For them, the picky little feline eaters that they are, I chose Blue Wilderness® Tasty Toppers Wild Cuts­™. 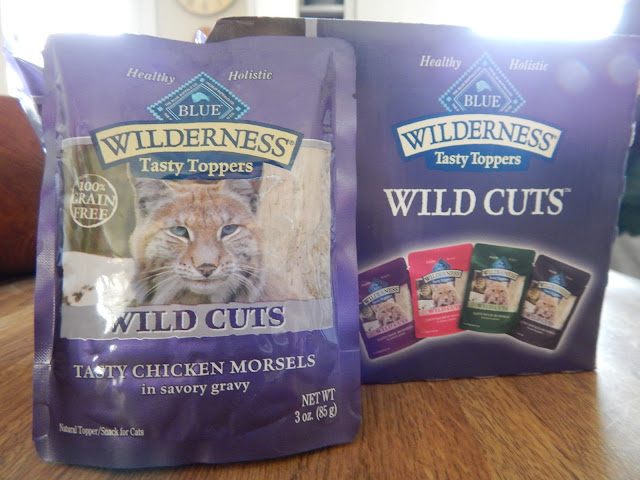 As I said, the kitties around here are picky eaters. There are roughly 2 kinds of moist food that I can buy with a guarantee that roughly 2 kitties will actually eat it. Thimble and Evan are the most likely to eat moist food, with housemate Toby somewhere behind them. Eddy, she won't touch the stuff. She lives and breathes her beloved dry food, and that's it.

So, when I saw these Blue Wilderness® food toppers, I figured it couldn't hurt to give them a try. I thought that maybe, just maybe, my kitties would like these enough that they would be tempted to more consistently eat their moist food if these Blue Wilderness® food toppers were added to it. Then again, as the product description indicates, these toppers can also be given as a treat by themselves. So, I thought, maybe my kitties would even like them as a moist food meal.

I chose the chicken flavor Blue Wilderness® Tasty Toppers Wild Cuts­™­­ morsels for my chicken-loving kitties. And these are legit, real chicken pieces. They also contain no grain, wheat, corn, or soy. They are also served in a juicy gravy, which is always a plus with my gang. 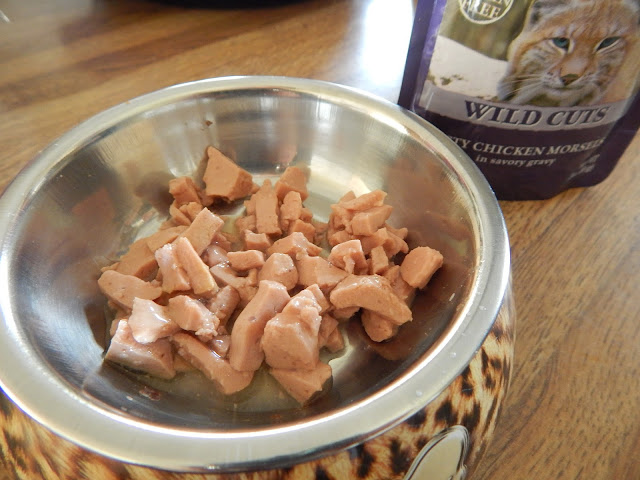 These morsels are perfectly moist and tender. They almost look like a chicken stew good enough for me to eat. But, I'm not the one reviewing the goods today.

I decided to give the kitties these food toppers plain at first, rather than start off by putting them on some food. To be honest, I didn't want to add any to their food unless I knew they liked them. It's hard enough to get my little felines to eat, so I didn't want to turn them away with something new that they might consider offensive. 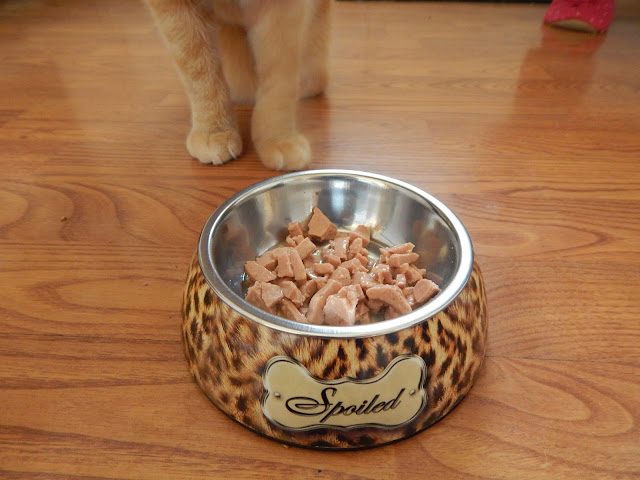 Evan, always my kitchen assistant, was the first to give the Blue Wilderness® food toppers a try. 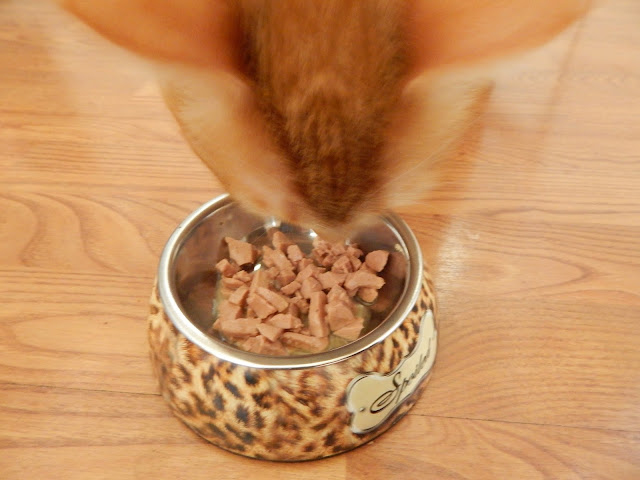 He seemed intrigued, gave them a good and long sniff, but then walked away.

Next up was housemate Toby. 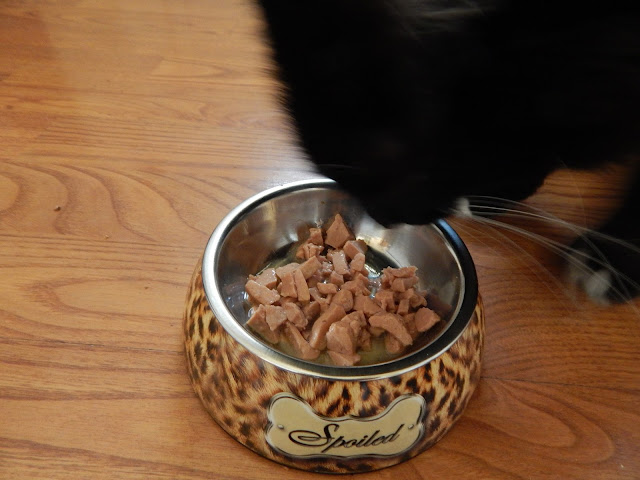 Toby actually gave the morsels a couple of licks, which is usually a pretty good sign here at our house of picky eaters. But, then, he also walked away.

Soon enough, then, Thimble came in for a try. 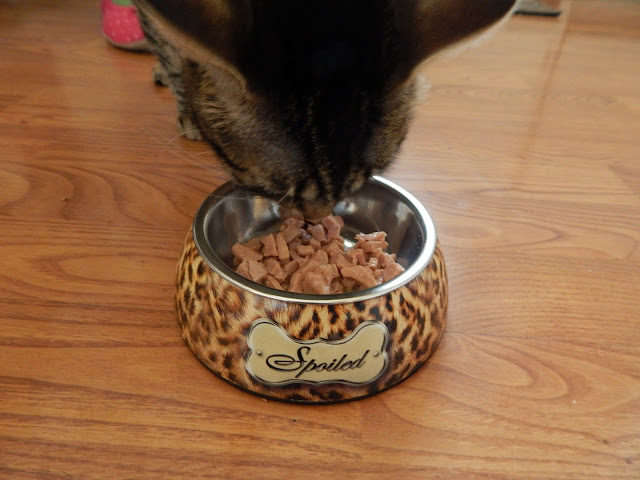 And you know what? She also walked away.

Now, sometimes leaving the food out for a bit leads to stragglers coming by for a second try, which sometimes leads to a realization that the goods are actually pretty good. This time around, though, that didn't happen. The food sat there with no takers.

But that's not the end of it. Why? Because my parents' kitties, all 7 of them, like the Blue Wilderness® Tasty Toppers Wild Cuts™! Oh, and so do the strays and ferals that I feed outside, as well as the neighbor's cat who likes to hang out in my back yard. Seriously, I got a dozen other cats to eat these delicious things without hesitation, yet my kitties won't touch them.

Anyway, while my kitties may not be offering any paws up, pretty much every single other kitty I know gives them 4 paws up. All in all, I'd say that's not too bad of a review for these Blue Wilderness® food toppers.


(Disclaimer: As members of the Chewy.com Blogger Outreach Program, we received Blue WildernessⓇ Tasty Toppers Wild Cuts™ in exchange for an honest review. All opinions are our own. We only review products that we believe will be of interest to our readers, and we never recommend a product that we do not believe in.) 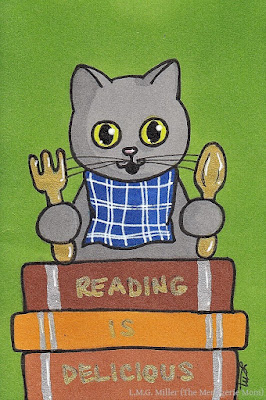 ***
Our Tip of the Day:
Cats can be notoriously picky eaters. However, there are some tricks and other methods you can try to get your finicky feline to eat. Before we get to those, though, keep in mind that you should seek veterinary assistance if your furbaby suddenly becomes a picky eater when they were not this way before, and if they show other concerning signs alongside inappetance. Also always consider your individual kitty's age and health status and how that will affect their dietary needs, and seek veterinary guidance with any dietary questions or concerns you have. And, of course, always be cautious about switching up your furbaby's food too fast or too often. Some furbabies don't handle frequent dietary changes well, and sometimes changing food too quickly can lead to diarrhea, vomiting, or other similar consequences. Especially when changing their dry food, always be sure to transition the food over a few days, slowly mixing them until they are switched from the old to the new.

Now, that all being said, for those generally picky eaters out there, here are a few tips you can try to perhaps get them to eat some goods:
Whew. Talk about a wordy tip. Of course some of these tips may work for some kitties, even some of those pups out there, but not work for others. And again, if you have any concerns about your furbaby's eating habits, please do consult a veterinarian.

It is hard to beat canned food. Gravy and meat! But we DO love crunchies too. We get those when TBT is eating is own dinner and tosses them around the room to catch.

Great review. Too bad the kitties didn't like the new food. But at least some of the others liked it. My outside cats will eat much better than the inside cats. Guess they are hungrier. You all have a great day.

Your cats sound as picky as us sometimes. We're glad the food was liked by your parents cats and the outside cats. At least somebuddy got a good meal. :)

Excellent review, it is good that you have the outside tasters and your folks' cats as tasters too. Your kitties crack me up at how picky they are, most of mine are piggies. Very cute drawing. And excellent advice on what to do to get kitties to eat. Phoebe has gotten pickier and we find heating her canned food for 7 seconds seems to help.

A nice honest review. Glad you had the others for input. You do have some picky kitties MOL
Timmy

Well, you might not have been followin' us thru me's Urinary purroblems, but they were caused by Blue Buffalo foods. And da VETs 'round here say dat 90% of kitty UTI patients they have are eatin' blue Buffalo noms. So we're kinda glad your furries wouldn't touch it. Great review and honest. Big hugs

MOL, it sounds like da opposite of us. We are not picky at all.

Great review, guys. We have picky and not-picky here. Hugs.

Your art is adorable! I love hearing that Mudpie isn't alone in her fussiness about wet food :) Those are some great tips too!

Smart to try it alone before putting it on the food. Glad someone ended up liking it.

Did you know you can shorten your links with Shortest and get money for every visitor to your shortened links.

Thank you so much for such an informative piece of information :)
If anyone interested similar one's have a look here
petreviewz