I wish I had some sort of brand spanking new photo to share of new girl Tonks. But, alas, the girl is like a rocket who shoots around the house faster than this human, let alone her camera, can even blink. I am working on having my camera at the ready when she's calm (which is something like 0.0079% of the time). I'm also still planning on getting some video of Tonks and her sister Winky, who owns my sister and lives with us, so that you all can see these crazy happy girls in action.

But, there I go rambling. For today, I do have some extra shots of Tonks that were taken during a photo shoot from which we've already shared a photo or two. We figured you wouldn't mind these old yet also sort of new shots of her. 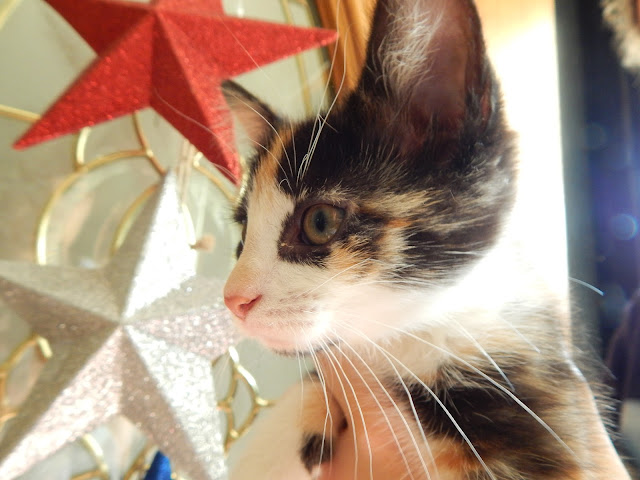 As we mentioned the last time we shared photos from this particular photo shoot, my sister is holding Tonks in these photos. After all, it's not like I was going to succeed at getting her to sit still on my own. We at least chose the front door as the backdrop, though, so you might be able to see our patriotic red, white, and blue stars that hang from the door. See? We totally had this all planned out ahead of time for the week of Independence Day. (That's our story and we're sticking to it.) 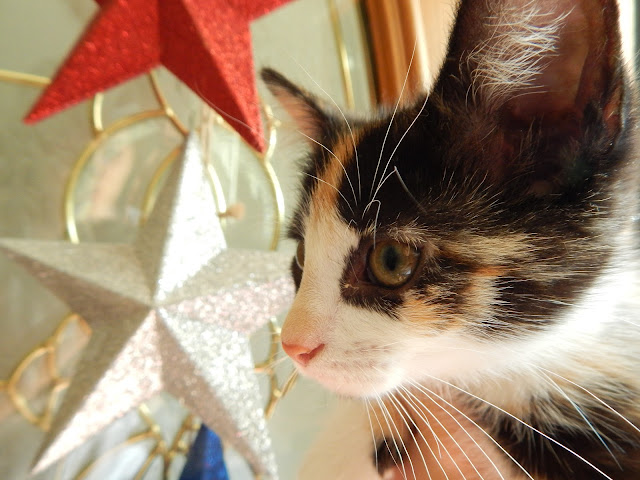 Tonks and Winky, as well as their brother Flitwick (who owns my parents, for those who don't know), all have a date with the V-E-T today. They're in the midst of their kitten series of vaccinations, and are also having fecal retests done to make sure their coccidia is all cleared up. Once they're big enough and old enough, they will of course be spayed and neutered.

Tonks hopes you all enjoyed seeing her cute face today! This here mom of hers will keep working at getting some new photos and videos of the kittens. It may not be an easy task, but they say that nothing worth having comes easy. 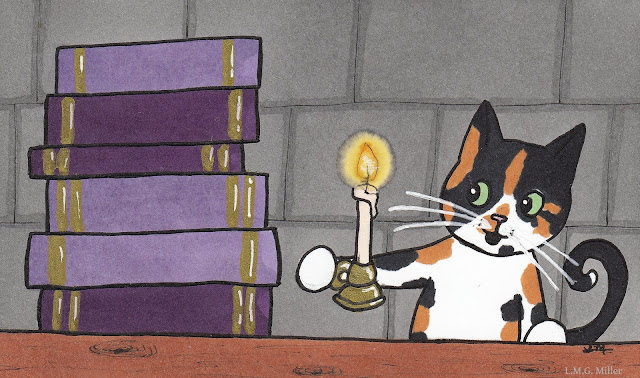 We've been offering some pet parenting hacks, including ways to save money or space while also having a happy furbaby. Today's tip is another plain and simple one, and that's to consider making your own toys for your cats, or even your pups. For example, if you have an old shirt you no longer intend to wear, you can cut it up and use the cloth to create simple knot toys for your cat. If you have some catnip on hand, you can even include some of that in the knot itself, or let the toy soak up some catnip in a sealed bag prior to gifting it to your cat. You can also use old clothes to make knotted or braided toys for a dog, as long as the dog is not know to eat such items. Even a lone or unwanted sock could be used as a toy, such as simply by rolling it into a ball that a cat or dog could bat around or chase.

You could even try your hand at making an interactive toy for your kitty, or even your pup. One such idea is to take a Tupperware container, cut roughly golf ball-sized holes in its lid, put some of your kitty's toys or treats in the container, put the lid on, and let your kitty use the holes to have fun trying to access their goodies. Then again, a cardboard box might work just as well for this DIY interactive cat toy. Interactive toys such as this can be great for a cat or dog's physical as well as mental health, especially if they are spending extra time closed up indoors due to the weather. It's even better when you can save money by creating such toys yourself.

The options for making your own cat toys, or even dog toys, are endless. You can even take cardboard boxes to make a cheap castle for your kitty! So, if you're looking to save some money, or if you want to find a use for safe yet unused items such as clothing, then consider how they might be used to create something fun for your furbaby. If you want further ideas, there are an astonishing number of ideas online, so look into all of your options if you wish to! Of course, always make your furbaby's health and happiness your highest priority, and do not create any toys that might put them at risk.
Posted by The Menagerie Mom at 12:03 AM

Tonks has beautiful coloring! Thanks for the tips on cat toys too - thinking outside the box (although boxes are great toys too!) is always a good idea and nice exercise of our "creativity" !

it was never properly organized. Then we took our trip to Europe and when we came back 6 weeks later, we jumped back into our homeschool routine and the pantry never got sorted out.
best double jogging stroller

Tonks, you are so darn cute. We love calicoes. Bet those two kittens are fun to have around. Have a terrific day.

Tonks is adorable...even if she moves too fast. ;) We hope all goes well at the vet today.

Tonks is so cute, I love these patriotic shots of her. Cute drawing and excellent tips. Always good to have lots of amusements for kitties and pups too. Have a great day!

The most adorable thing that kittens do, is the conk out right in the middle of everything!

Tonks is a cutie ... I could stare at her all day long!

Those are such fabulous photos!!! I love the patriotic touch :)

Tonks sounds a lot like our Link. He never stopped moving as a kitten, and he still acts like a kitten even though he is 5 years old.