An Upside Down Selfie and a Rhyme

You know who doesn't get to share selfies very often? 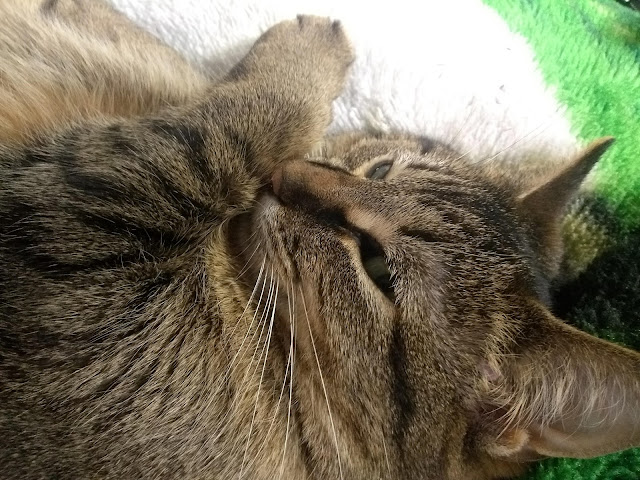 Eddy! Active girl Eddy rarely sits still long enough to snap a selfie. Recently, though, this usually blurry girl agreed to snap a selfie while snoozing on this here human's lap. She's sort of upside down and not in the most orthodox pose, but my completely unbiased opinion is that she's completely adorable nonetheless.

Of course, Eddy is entering her selfie into the Sunday Selfies Blog Hop, hosted by the Kitties Blue over at The Cat on My Head.

Since we've been participating in the April A to Z Challenge every weekday except Sunday, we've been using this day to share our usual Thursday poems. This change in schedule will be coming to an end soon, but not yet. That means we indeed have a poem for you all today.

We always enjoy participating in Angel Sammy's Thoroughly Poetic Thursday challenge. We also appreciate that our host always shares a photo prompt to guide us, like this one here:

This image seems both mesmerizing and haunting to me. That's a lot of identical mansions. I certainly did use this image as inspiration, though I did take some liberties. Sometimes I have a distinct explanation for why I wrote the poem that I did, but I don't have that this time around. For this one, I just sort of started writing and let the poem go wherever it wanted to go. Below was the result of that:


Every house on Lindy Lane looked exactly the same.
In truth, that made the residents feel the most sane.
They wanted nothing more than complete and total normalcy.
Anything else would bring about sure insanity.

New neighbors always made the residents of Lindy Lane nervous.
After all, what if a newcomer brought with them a disservice?
Lindy Lane residents wished for their street to remain free of change,
And they worried a newcomer would not want the same.

Then, one day, the nightmare came.
A newcomer showed up at the vacant house on Lindy Lane.
This new neighbor was a bright and lively young woman,
And the usual residents were not happy about this for even one moment.

The problem was that this new woman was not like them.
From somewhere else completely she must have stemmed.
After all, the woman had purple hair!
Did she have no shame or a single care?
Surely not, if dying her hair purple was something she dared.

This new neighbor also had a big orange tabby cat,
Which happened to sit upon her head like a weird hat.
Who was this woman, and why was she here?
Was she going to ruin the Lindy Lane the residents held so dear?

The folks on Lindy Lane soon realized this was indeed the case.
In just one day, all their work towards normalcy this new neighbor began to erase.
Roofs and shutters of grey were the norm on Lindy Lane,
And all siding and porches were white, perfect, and the same.

The new woman on the street, though, she changed all that.
She went out to her yard one day, along with her orange cat.
She placed on the ground buckets and buckets of paint.
The residents of Lindy Lane thought they just might faint.

By the end of that day, her house was no longer white.
Against the normalcy of Lindy Lane this new neighbor did fight.
Her house was now purple, much like her hair.
Painting her door turquoise was another thing she dared.
More than one neighbor was about to go tell this woman off.
Then, though, she exited her house with a plate of cookies as big as a trough.

With that great big plate of cookies in her hands,
The new neighbor went to every door and introduced herself as Jan.
She offered cookies to every single soul on Lindy Lane.
Accompanying her was her big orange cat, who was introduced as Twain.

The residents of Lindy Lane could not deny that Jan's cookies were delicious.
But that wasn't the only thing that made the new neighbor less suspicious.
Jan began to prove herself someone who truly did care,
Despite her purple house and equally purple hair.

On her second day on Lindy Lane, Jan helped old Mr. Frost with his lawn.
She didn't even meet his endless tales with frowns or yawns.
Jan also offered to make a trip to the grocery store for old Miss Cross,
And she returned with everything on the list and with nothing lost.

Jan had offered nearly every neighbor help by the end of her first week.
She and her tabby Twain even took care of the furry family of those in need,
Making them friends to neighbors both human and furry, indeed.
In truth, as a nuisance on Lindy Lane Jan was no longer seen.
The residents of Lindy Lane realized their initial judgments had been quite mean.
They now knew that expecting everyone to be the same was absolutely obscene. 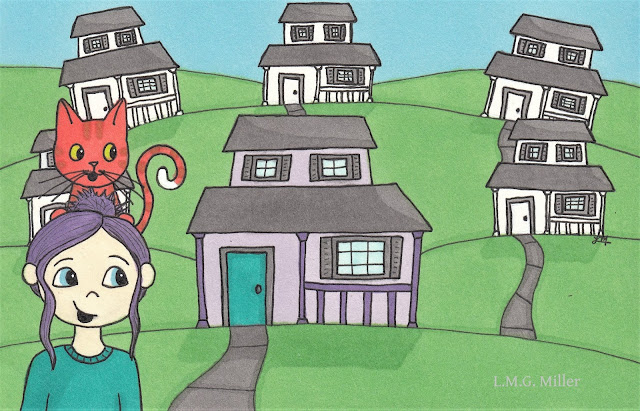 Well wishes to all!

Our tip today is based off of one small aspect of our poem today, and that is hair dye. To begin, it's perhaps obvious that it's not recommended to dye your cat or dog's fur. There are dyes that are actually pet-safe, but even in that case you have to consider whether your kitty or pup will tolerate or enjoy having their hair dyed. All of that being said, what about human hair dye? Is that safe for our furbabies? The answer is no. Though different hair dyes can contain different chemicals or other ingredients, in general, these types of products can be harmful to cats and dogs. Even hair dyes deemed to be more natural have been found potentially toxic to furbabies. Ingestion of or contact with human hair dye could lead to a cat or dog displaying symptoms such as vomiting, diarrhea, burns or redness on the skin or in the mouth, loss of appetite, and lethargy, just to name a few. For these reasons, if you use hair dye at your home, keep it well out of the reach of your furbaby. In addition, if you have freshly dyed your hair, try to keep your furbaby from coming into close contact with your hair. As always, it's better to be safe than sorry.
Posted by The Menagerie Mom at 12:00 AM

Hurray for the Purple house! Ours is green on a street of beige.

That's really a great poem-story for what really is a most INTERESTING photo! I kept thinking it would be great to paint a house something different in that community but I bet they have some rules about that - obviously they want everything to look THE SAME!

Eddy, we love your selfie!

Is that picture real? What a funny place, with all of the mansions looking the same!

What a sweet selfie, Eddy!

Eddy's selfie is purrfect from any angle!

That's a fabulous way to get Eddy in a selfie, and i enjoyed the poem very much!

Great selfie Eddie. Love all the pictures. You have a great day.