Some Sort of Selfie and a Rhyme

I'm not sure whether we can call this week's selfie a sleepy selfie or not. On one hand, it is a yawn. On the other hand, it looks like this: 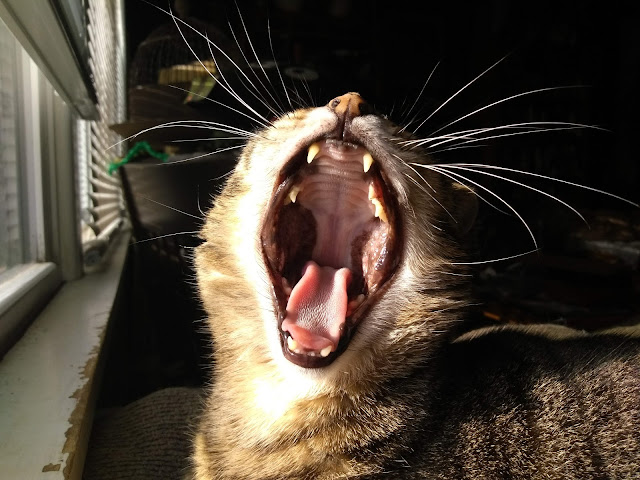 How would you classify this selfie from Thimble? Sleepy selfie? Scary selfie? No matter what it's called, Thimble is quite proud of this shot. She hopes you enjoy it!

P.S. Can you see where Thimble's missing the teeth she had extracted last August?

In the month of April, we're also sharing our Thoroughly Poetic Thursday poem challenges on Sundays, due to the A to Z Challenge schedule. That means we're about to do some rhyming.

Our host, Angel Sammy, always offers a photo prompt to guide us. This past week's prompt was this adorable image here:

I believe I've mentioned my love for panda bears before. I've loved them since I was a kid, and I even have a huge collection of panda knickknacks that I've collected and been gifted over the years. I just love how pandas are an adorable mixture of cute and clumsy. Videos of panda bears playing on slides and other playground sets are some of my favorite to watch. They may bumble around a bit, but they have fun while doing it.

Anyway. I absolutely had to show my sister the above photo. When I did so, she told me I had to write my poem about pandas named Percy and Priscilla. Using the playground concept, as well as the names my sister gave me, I just started scribbling words down and ended up with this silly rhyme:

The New Kids on the Block

A new family moved in on the quiet little block.
To the playground their two children immediately did flock.
The regular residents watched as the young ones bumbled to the park.
"Do they think they own this place?" Mr. Wolf did bark.
Mrs. Lion chuffed and said, "It's a public playground.
It's free to use by any single soul around."

From their yards and windows the neighbors continued to watch.
The new neighbor children went to the swings and slide and played hopscotch.
Mrs. Lemur asked, "Do these two little ones even have parents?
I sure hope they're not about to ruin our neighborhood like tyrants."

"Just look at them," said Mr. Chimp from the tree stump on his lawn.
He watched as one of the new kids on the block fell off the slide with a yawn.
Then the other one fell off a swing, rolled, and landed in a lazy lump.
These new kids were quite uncoordinated, and more than a bit plump.

The house these new kids moved into was surrounded by leafy trees.
Even when squinting, it was a difficult home to spy on and see.
More than one resident declared, "We need to meet the parents of these little boors."
Mrs. Zebra and Mr. Giraffe began debating who should go knock on their door.

There was much more debate before Mrs. Grizzly said, "Good grief, you schlups.
I'll just go knock on the door and see what's up."
She sighed and sauntered her way down the block.
When she arrived at the new family's home, she rang the bell and knocked.

There was a shuffling inside the house,
With sounds made by nothing resembling a mouse.
After waiting something like an eternity,
Mrs. Grizzly finally heard the door unlock, quite slowly.
In response to her knock and ringing of the doorbell,
In front of her now stood two individuals not much different than herself.

"Oh, hello," one of them said.
"I'm Mr. Panda," he added, scratching his head.
The other one smiled, her cheeks hiding her eyes.
She said, "And I'm Mrs. Panda. Thank you for this surprise.
We were hoping to meet our new neighbors in little to no time."

"Oh, yes, it's a pleasure to meet you," Mrs. Grizzly said.
She added, "I was actually here to inquire about your children just ahead."
She pointed to the playground in the nearby distance.
The children were both tumbling down the slide at that very instant.
"Oh, goodness, yes," Mrs. Panda said in reply.
"They are both really quite clumsy, I cannot lie."

Moseying out onto the lawn,
Mrs. Panda first had to stop for a yawn.
Then she shouted, "Percy! Priscilla! Come over here!"
Stumbling and rolling, the two little ones in the park drew near.

"Yes, Mama?" the new kids on the block asked.
Mrs. Panda said, "Come say hello to our neighbor. Come on. Fast!"
Fast was not a thing for the two young ones.
They were too busy ambling and having fun.

As Mrs. Grizzly began to chat with the Pandas in their yard,
She learned that they had traveled really quite far.
They were slow to tell their story and slow to move around,
But it would be a lie to say they were unfriendly or capable of frowns.

Perhaps because they saw that Mrs. Grizzly was not immediately scared away,
The rest of the neighbors came over to see what all there was to say.
Greetings were made and pleasantries were exchanged.
Every resident on the block joined the welcome party until to night the day did change.

Perhaps it had been wrong of them to judge so quickly
There really was nothing wrong with Priscilla and Percy.
The Pandas were instead quite friendly, even if slow and clumsy.
The neighbors grew to find Percy and Priscilla in the park not annoying but funny. 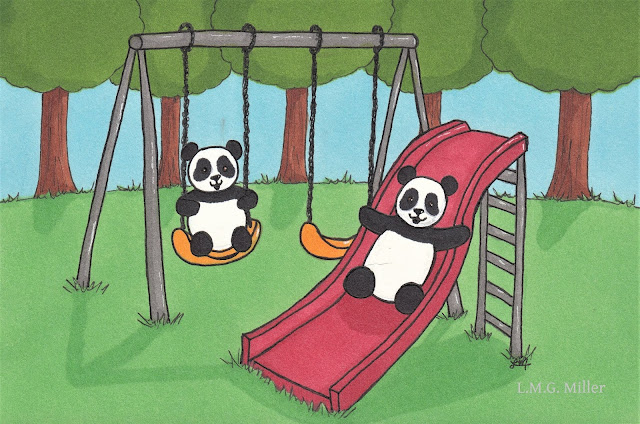 Rather than a tip today, we have some fun facts. The topic at hand was first brought about by Thimble's toothy selfie. Then the poetic photo prompt got me thinking about pandas, and so now today we're just sharing a couple of facts about different species' teeth.

Did you know that adult cats have 30 teeth? This is compared to an adult human's 32 teeth. And did you know that dogs and giant pandas have the same number of adult teeth? That would be 42, in case you were wondering. Each of these species also has teeth and jaws specially designed to properly consume their natural diet. Cats and dogs, for example, have teeth and jaws specifically designed for piercing, tearing, crushing, and other actions required of predators. Panda bears, on the other hand, have teeth and jaws that allow them to consume food such as—you guessed it—bamboo. This means pandas have powerful jaws and sturdy teeth, both of which are required for eating bamboo. Obviously, different species will have different types of dentition, largely depending on what they eat. The animal kingdom is filled with all sorts of variety.
Posted by The Menagerie Mom at 12:37 AM

Cute poem and that is a pawsome yawning selfie!

Thimble has taken an epic selfie. Have a great week all of you and keep safe (and inside).

Nice selfie Thimble.....we can see right down your throat! Love the panda poem too - and the accompanying doodle which could easily be the pandas in the "inspirational photo" having fun in the play yard. Pandas are "eternal kids" I think!

That's quite a selfie!! Your poem and doodle were great too.

That's a most impressive selfie. In fact, if you hadn't told Us it was a yawn, We might have taken it for a ROAR.

We always enjoy seeing you Thimble. What nice bit toothies you have too for this nice Selfie. Great poem for Pandas

Wow Thimble, that is one giant yawn/laugh/roar!

Great poem , as always. Pandas are so cute and so is Thimble :)

It's a downright adorable selfie!

Thimble, i think i see your tonsils, that's quite a yawn!

Fun poem, and fun facts about teeth. Hope you had a wonderful and blessed Sunday.

I could lose myself in that yawn, Thimble😸Clean Pawkisses for a Happy Earthday. Stay Safe Healthy and Yourselfie🙏🐾😽💞