Evan asked for help snapping a selfie showing how he helps his mom spring clean. 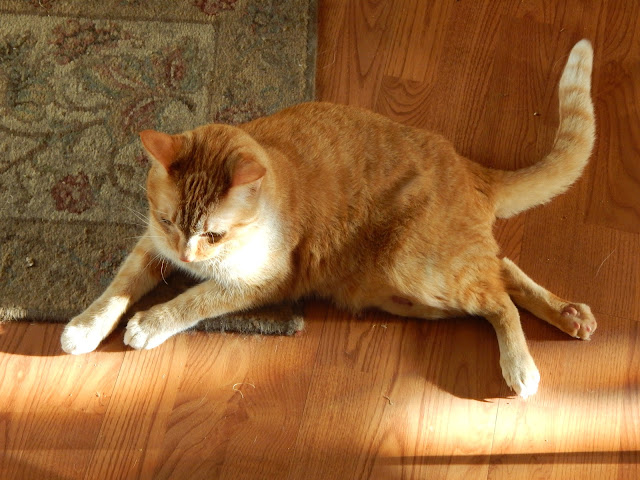 When your human's trying to vacuum or mop, it's best to block the rug and the floor beneath it. Helpful, right? Evan sure thinks so.

Evan's selfie snapped while his mom tried to spring clean is of course our contribution to the Sunday Selfies blog hop, hosted by the Kitties Blue over at The Cat on My Head.

Speaking of spring cleaning, we finally have for you our poem for Angel Sammy's Thoroughly Poetic Thursday challenge.

I usually share my weekly poem and its illustration on Thursday, but since the A to Z Challenge is going on this month on every day except Sunday, I decide to move my poems and their illustrations to Sundays. Our usual schedule will return come May.

Anyway. As usual, our poetic host shared a photo prompt to help guide us. This past week's prompt was this image here:

I really enjoy this type of imagery. Anything with a quaint little house always gets me thinking. I always wonder who might live in a such a home. This week, the sight of the above house actually got me thinking about spring cleaning. Perhaps it was the condition of the house that turned my mind to that thought. So, I simply had spring cleaning on my mind, and the silly little (well, not so little) poem that resulted was this:

Jane's grandmother asked for her help at the start of spring.
After all, the little old lady's house was in need of a real good clean.
Just like that, Jane gathered up a mop and a broom,
And then to her grandmother's house she did zip and zoom.

Jane arrived on her grandmother's porch with a smile on her face.
The house was surrounded by rosebushes blooming on these spring days.
As soon as Jane entered the home, though, her smile was erased.
"What on earth happened in here, Grandma?" she asked.
The floors were littered with items and cleaning would be a task.

Jane's grandmother at first only shrugged.
Then she said, "You can blame Bill, Tom, and Doug.
I myself am tidy and clean as a whistle,
But my roommates make the house look destroyed by a missile."

To an outsider, her grandmother's words might have sounded senile.
Jane, though, knew what she meant and could not help but smile.
The roommates her grandmother spoke of were not the usual kind.
They were furry, orange, whiskered, and none other than feline.

As if perfectly on cue, Bill, Tom, and Doug ran into the room.
They immediately knocked a vase to the floor with a boom.
The flowers and shards joined the rest of their victims on the floor.
The number of items the cats threw to the floor numbered a dozen and more.

After surveying the room, Jane began picking things up.
Undoing everything she did, though, were of course Bill, Tom, and Doug.
With a sigh, she put her hands on her hips.
"What am I going to do with you three?" came from her lips.

Looking around, Jane realized she saw none of the cats' toys.
She said, "Is that why you're destroying this house, boys?"
Knowing her grandmother spoiled her cats rotten,
Jane started looking for the toys that had somehow been forgotten.

Searching high and then searching low,
Jane faced the couch and dropped to her knees and elbows.
"Here they are!" she shouted excitedly.
From the beneath the couch she pulled cat toys that number a dozen times three.

Jane threw the toys here, there, and everywhere.
Bill, Tom, and Doug began chasing them on the ground and in the air.
With the cats now distracted with things of their own,
Jane found herself able to get in the true cleaning zone.

She picked up vases, cups, and knickknacks over here and over there.
She swept dust and cat hair from every floorboard, shelf, and chair.
When she was done, everything was sparkling clean.
She picked roses from outside and placed them in vases quite pristine.

Everything was exactly where it belonged.
That is, until Bill, Tom, and Doug again came along.
They jumped on the table and began pawing at a vase,
The one that Jane had just moments ago polished and perfectly placed.

She caught the vase just as Doug whacked it off the table.
"With these boys around," Jane said, "nothing will be stable."
"Why aren't you playing with your toys?" she asked.
Looking around, Jane realized she yet again saw not a single toy for cats.

She made her way back over to the couch.
Beside it, she yet again did crouch.
Lo and behold, beneath it was yet again a graveyard of toys.
To the cats, Jane said, "Let's make these toys always accessible to you boys."

She pulled the toys from beneath the couch yet again.
Then, blocking the toys from disappearing became Jane's intent.
She put up blocks at the base of every couch and chair,
So that the cats' toys could not disappear here or there.

In order to test the work she had done,
She tossed some cat toys and watched Bill, Tom, and Doug.
Not a single toy disappeared beneath a couch or chair.
They all remained on the floor or flew threw the air.

With the cats now distracted by their ever present toys,
They no longer partook in vase-throwing or other such ploys.
Jane had only a couple more tasks to spruce up the house,
And to finish them she went to the door and stepped out.

On the porch, Jane enjoyed sight and scent of the rose bushes.
They had plenty of flowers to offer, and so she borrowed a bushel.
She placed some in pots on the porch's freshly cleaned wooden floor,
And then hung other roses in a wreath on the sweet little home's door.

"It looks wonderful!" Jane's grandmother said with a clap.
"And you somehow finished all of this while I took my nap."
Then her grandmother looked around the living room and asked,
"How on earth are all of these vases surviving the cats?"
Jane could not help but smile and laugh at the memories of that. 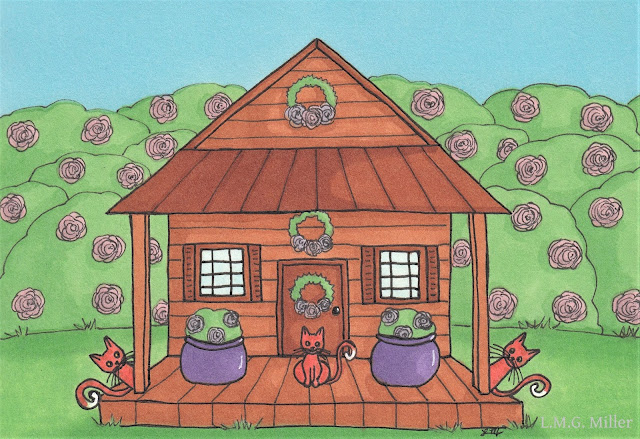 Wishing you all lots of sun and health on these spring days!

To go along with our above talk of spring cleaning, we thought we'd offer a brief tip on the allergies some kitties and pups have. Just like humans, cats and dogs can have seasonal allergies, of course including spring allergies. Grass and pollen, for example, can cause allergy flares in some furbabies. They can also have allergies to dust, mold, and a variety of other environmental features. Symptoms of such allergies include sneezing, itching, red or watery eyes, and a variety of others.

So, how can you help reduce allergic responses in your kitty or pup? It's not always easy, but you can try some things that might help. For example, keeping windows and doors closed can help reduce the amount of pollen, dust, and other allergens that enter the home. You can also wipe down the paws and fur of furbabies who go outdoors, so that any allergens that might have accumulated on them are less likely to affect them or spread throughout the house. On that same line of thought, you can also take off your shoes and change clothes upon spending significant time outdoors, again for the purpose of reducing the amount of allergens spreading throughout the house. Regularly cleaning floors and other areas of the house can also help, as can regularly changing the air filter in your home. Of course, another option is giving an antihistamine to a cat or dog with allergies, but this option should always be discussed with a veterinarian. Cats and dogs can of course also have allergies to food, but that is a whole other conversation you would have to have with your veterinarian.
Posted by The Menagerie Mom at 8:47 AM

I bet your Mom loves you 'helping' as much as I do when my kitties 'help' - MOL! You sure look cute when you are 'helping' Evan!

Evan we like that help you give Mom. We help dad too unless the Vacuuuuuum comes out

Manny loves to walk across anything, which means he knocks over more things that he avoids!
However, we are amused and simply adore his antics.

You are clearly a great helper, Evan. You are so comfortable helping Mom out!

Sounds like a great way to help with cleaning! Just hope she doesn't turn the vac on!

I always enjoy your poems and this one is no exception. It was great and I like the drawing too. And Evan, you are too funny. Great tips too.

Sorry we are late. I have been getting to grips with a potential job teaching someone to read online!

They have to stay close to snoopervise properly.

Fun poem, and a good reminder to regularly look under the furniture!

An awesome poem, and a welcome visitor to the selfies too. Mrs H says you are most resourceful a poetess, and if your dusting is like your poems than can have a job whilstshe a rest! MOL
Purrs
ERin

Great poem - I love it in fact.....I could almost smell the roses! I also think this is a favorite fantasy - falling asleep and waking up to find the house clean top to bottom! LOL

Thanks for being a poetry challenge participant every week - we'd miss you if you stopped!!

hugs, Pam and Teddy too

An impressive blog, this is what I've been looking for. This really helped me! Thanks for sharing this wonderful information! - electrician Templestowe Lower

If you are looking for a reliable trustworthy local carpet cleaning company in Milton Keynes then you're in the right place. Carpet Cleamimg in Milton Keynes
Throughout the 10+ years experience we have dealing with dirty carpets in Milton Keynes, we have gained industry leading expertise – giving us the ability to provide residential and commercial customers with exceptional cleaning service.

Very informative and impressive post you have written, this is quite interesting and I have gone through it completely, an upgraded information is shared, keep sharing such valuable information. Find the best House Cleaning Poetry

Thanks for the post keep sharing
Carpet Cleaning Hacks