Friendly Fill-Ins and the Letter C

Happy Friday to all! How about we kick today off with the Friendly Fill-Ins challenge? We'll share the fill-in statements again below. Ellen of 15andmeowing came up with the first two, and I came up with the second two.


1. April is a good time to spring clean.
(This is such a cliché answer. That being said, my house as well as my garage are in dire need of a deep clean, and spring is the perfect time for that. I'm so excited. I wish sarcasm was more evident on a computer screen, because that last sentence was a complete and total lie.)

2. This time last year, the world was a vastly different place.
(The other day, I heard someone say how strange it is to be living through a major historic event. I find that to be a very intriguing way to look at this pandemic.)

3. I am determined to live a more minimalistic life.
(My answer to #1 above is going to help me with this. I've been doing pretty good with decluttering over the past couple of years, but my house and I still need quite a bit more work to really arrive at true minimalism. Honestly, though, I'll never be a true minimalist. I have too many crafty hobbies and furbabies to allow for that. But, I'll get as close as I can.)

4. I have no intention of living a life without furbabies.
(Duh.)

Now, what else do we have on the docket today? For one, the A to Z Challenge. 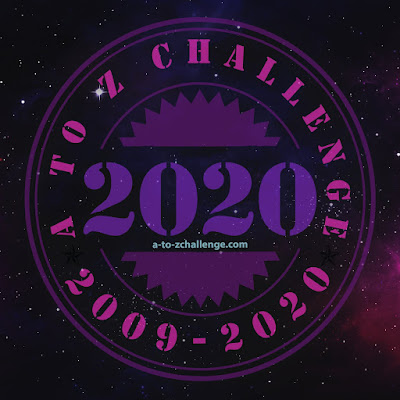 Our theme is of course still "A Day at Rosie's Restaurant". These first few days of letters are in honor of the meal known as breakfast. So, what's on angel Rosie's breakfast menu for the letter C? 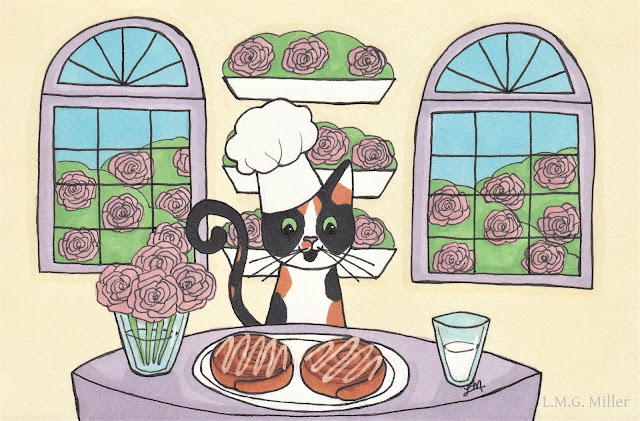 Don't worry. We didn't forget to give you your Eddy fix today. I'll warn you and admit that this photo of Eddy is not a high quality shot. It was yet another photo taken at night, with the only lighting being the obnoxiously bright lamp I had at my disposal. I wanted to snap and share this photo for a reason, though. 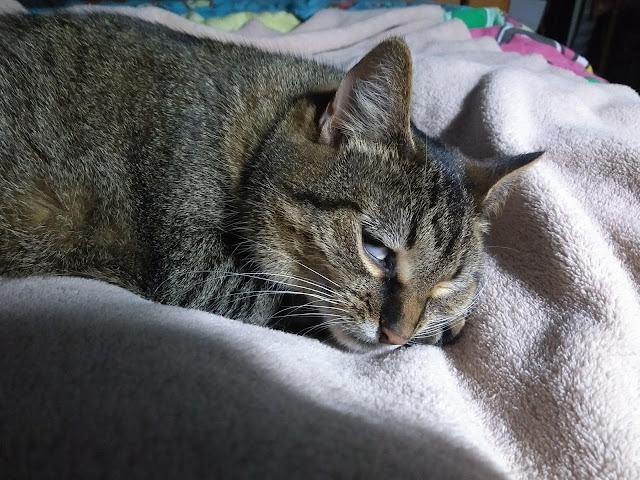 I told you it was an exceedingly low quality shot. But, that's not the point. I wanted to share this photo because it shows at least one of my girl Eddy's extra special qualities.

For those who don't know, when I adopted Eddy, she was a 10-week-old kitten with some sort of neurological anomaly. After she was trapped out in the country by a local rescue group, she suddenly developed an unexplained head tilt and facial nerve paralysis, and she could only walk in circles. I adopted her, and over time she largely recovered from whatever neurological issue she had mysteriously developed. She does have a couple remnants of that neurological flareup, though, and those are a mild head tilt and right-sided facial nerve paralysis. Eddy's head very often tilts to the right. Also, on the right side of her face, her lip remains curled up so that her canine tooth always shows, and her right eye never fully closes. That's what you're seeing in the photo above. That's Eddy sound asleep, her primary eyelid still open, but her third eyelid coming out to play. Luckily, her third eyelid still functioning means that her eye never dries out, even though the primary eyelid never fully closes. I love Eddy's special quirks. They make her even cuter than she already is. Not that I'm biased or anything.

Well wishes to all!

Following today's talk of cinnamon rolls, let's give a little tip on cinnamon. Cinnamon has been deemed non-toxic to cats and dogs by organizations such as the ASPCA. That being said, cinnamon certainly should not be given freely to furbabies, as it can still potentially have dangerous side effects. A cat or dog can safely consume cinnamon in small amounts, such as if cinnamon is used in a safe recipe that your furbaby tastes. This is why it is deemed non-toxic.

In concentrated or large amounts, though, ingesting cinnamon could possibly cause irritation in your furbaby's mouth, or potentially elsewhere in their body. Cinnamon could also be dangerous to your cat or dog if they inhale the powder, or if they're exposed to cinnamon essential oil. This type of exposure can lead to various forms of respiratory distress, as well as low blood sugar, liver disease, vomiting and diarrhea, and a variety of other potential issues. So, if your furbaby eats something that contains a tad bit of cinnamon, do not fret. Do, however, refrain from letting your kitty or pup gulp down large quantities of cinnamon, and try to keep them from sniffing cinnamon, both in the powder and essential oil form.
Posted by The Menagerie Mom at 12:00 AM

Indeed, these things all make Eddy all the more special. As for your #3 answer above- dad says learning (from mom, of course) to live a minimalist lifestyle has been one of the best things ever. He says it gives you such a feeling of relief and freedom he can't explain it. Having been a "collector" most of his adult life he now prefers living minimally, from belongings and junk to our sparsely yet comfortably furnished apartment. We don't need much these days to keep us happy.

Sweetie will be right over to pick up a cinnamon roll for breakfast. That’s his all time favorite, while apple fritters are mine.

We won’t ever be minimalists, either, not really. Both of us have too many things we collect.

Eddy is so special!

I admire the minimalist lifestyle but acknowledge I am not so inclined! I do try not to buy more "stuff" - I may like something and enjoy and admire it but do I need it? Not really......it's just more stuff someone one day when I'm gone will have to put in a yard sale! Cinnamon rolls are a fave around here......irresistible in fact. Love your fill-ins and thanks for co-hosting the HOP!


I will never be minimalist. I'm not really materialistic but I like stuff and sometimes too much. We do want to declutter, though. Once we find a bigger place I think it'll be easier for us to wade through this mess and take with us what we want to the next place then get rid of the rest. It's so hard to do right now.

Cute sketch of Rosie. I love cinnamon rolls! I made some for Christmas morning this past year and the year before. I hope to make this a traditional thing now that I've gotten the hang of it.

Thanks for hosting the fill-ins and happy A2Zing, my friend. Stay safe and well. Hugs, love, & prayers to y'all!

Eddy is adorbs!
The Hubby puts cinnamon in a lot of our food, and even though it's not like when I was a kid and made cinnamon toast (lots of butter, a touch of cinnamon), I love the taste, and it's good for you!

The world sure was different at this time last year. Hope you have a great weekend! Take care and stay safe!

I love cinnamon roles. Very cute drawing. Great fill-in answers too. Many of ours were similar :) I could never live without furbabies either. Eddy is adorable exactly as she looks. Have a nice weekend and stay healthy. XO

It is a different time for sure.

Have a purrfect day and weekend. ♥

We think the photo of Eddy is lovely and the lighting works well.

Great doodles and yes, we are living through a very historic time.

Eddy is such a special sweetheart. I'm getting hungrier every day for your goodies, Rosie!

Eddy is so sweet! Loved all your answers to the friendly fill-in questions too. Thanks for sharing. We have been working hard during this time to downsize somewhat. It is hard to do. Oh yum to all the goodies. Have a wonderful weekend and stay safe and healthy. HUGS across the miles to all

My peeps have lived through many historic events and even witnessed some like 9/11. This is one event they could have done without.
We call them cinnamon buns here and the peeps love them. Inhaling cinnamon or eating it by the teaspoon is bad for humans to. Remember that youtube challenge that landed kids in the hospital?
Eddy is so cute.

Eddy's issues just makes her more endearing. :) We could go for one of those cinnamon rolls right now.