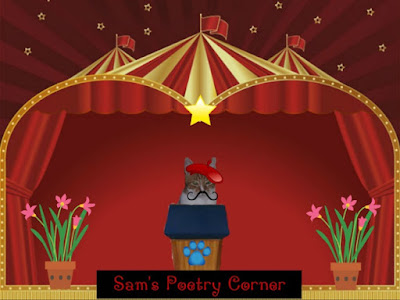 Every week our host shares a photo prompt to guide us as we get poetic. This week's prompt is this pretty image here: 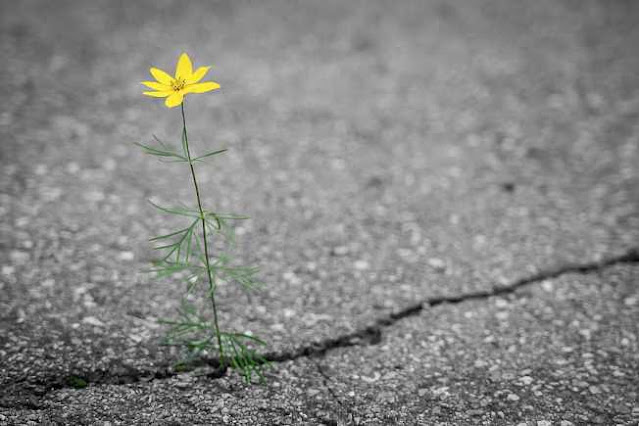 The first thing I thought of when I saw that image was Dr. Seuss' The Lorax, which more or less involves a sort of plant-like tree in which certain creatures live. That was a terrible description of the story, but I bet some of you already know what The Lorax is. So, anyway, I let that story idea inspire me and ended up with this silly rhyme:
A Walk in the Park
Bruno quite enjoyed his daily walks,
When he strolled outside with his human named John.
His tail would wag and he'd smile a slobbery smile,
As John tried to keep up with the excited dog all the while.
Bruno and John's usual walk took them through a park lined with ponds.
Seeing birds and hearing frogs put even more pep in the steps of the dog.
Bruno loved meeting new people and making new friends.
He always wished his walks would never come to an end.
On one fine night, Bruno trotted and pranced down the park's sidewalk,
Playing along with the remnants of a child's game of hopscotch.
He would've whistled right along with his human named John,
But he instead let his tongue loll out after an excited, vocal yawn.
The grass was green and flowers grew all over the place to be seen.
There were marigolds and daisies and cattails by the ponds, blowing in the breeze.
Then, with one step, Bruno found himself letting out a mighty sneeze.
He had walked right into a pretty flower as golden as a bee.
The flower grew out of none other than a sidewalk crack.
Hmmmm, Bruno though, would you look at that!
"Excuse me," Bruno then suddenly heard a tiny voice say.
He twisted his head this way and then twisted it that way.
The tiny little voice certainly did not belong to John.
In fact, Bruno's human seemed quite deaf to it all.
"You might want to watch where you're going," the itty bitty voice spoke again.
Looking at the sidewalk flower, Bruno saw the owner of the voice just then.
It was a tiny orange cat standing outside a tiny blue house,
All on the center of the flower that was no bigger than a mouse.
Again, Bruno tilted his head this way and that.
"Look at you!" was all he could say, smiling a slobbery smile at the mini cat.
The cat shook out its fur and trotted in a circle.
Bruno excitedly jumped over the flower like a hurdle.
"You live on a flower!" the dog said with a wag of his tail.
The cat let out a tiny sigh as out of the tiny house on the flower came a snail.
The cat said, "It's my friend here who lives on this flower."
Bruno wondered if the expression on the cat's face was a glower.
Then the feline continued, "I'm a cat. Why would I live on a flower like this?
I live on the cattails you see over there just a bit."
Bruno turned his smiling, slobbering head toward the nearest pond.
Of those cattails he was now growing really quite fond.
He had sniffed and waded through them so many times.
Wait, he thought, I hope I've never tossed around this tiny little feline!
A sigh sounded and then Bruno heard a yawn.
He realized it came from his own very human named John.
"Come on, Bruno, you've sniffed that flower long enough," the man said.
He motioned for the dog to continue walking after patting him on the head.
Never one to disobey his beloved person,
Bruno said to the cat, "It was nice to meet you, little kitty, for certain!"
With an excited hop the dog added, "I come here to walk every single day.
I'll look for you tomorrow! Yes, I will! Okay?"
"Great," was all the tiny little cat said in reply.
Bruno wasn't sure if, sitting on the sidewalk flower, the cat let out a sigh.
It didn't matter, because Bruno was certain the two of them would be great friends,
And he promised to search for his new pal on the cattails before tomorrow's end. 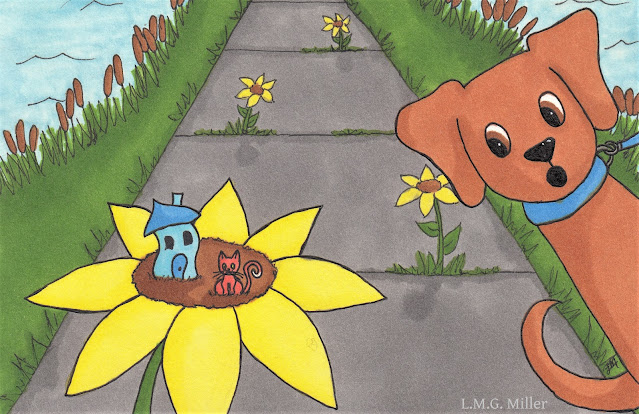 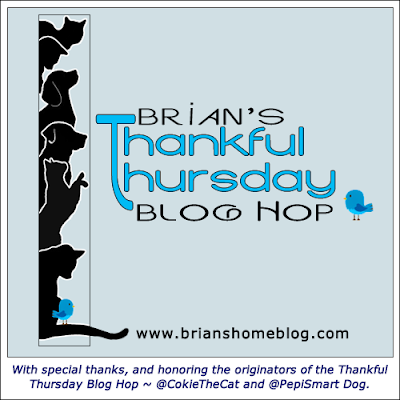 Following up yesterday's photos of Astrid waiting for Thimble to leave the most popular window seat in our house, Thimble wanted to express her gratitude for her pup sister Astrid. 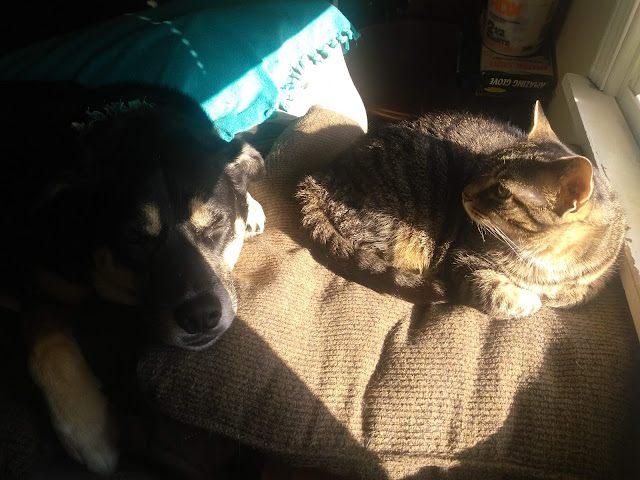 Thimble is most often quite fond of Astrid, and she rarely seems to mind sharing the window with her drooling dog of a sister. 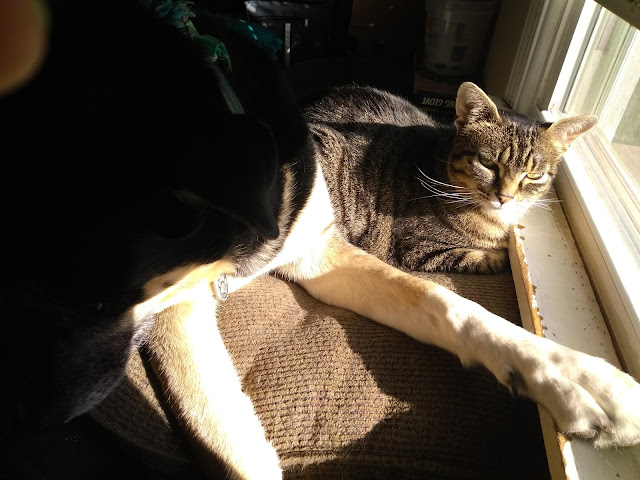 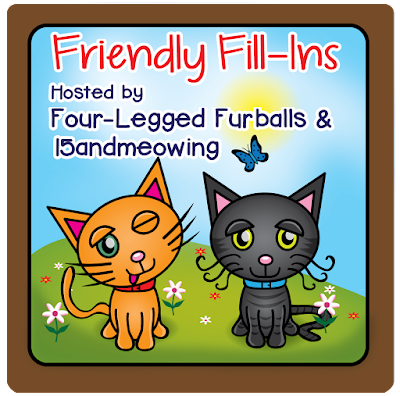 We'll see you tomorrow, friends!
***
Tip of the Day
Today's tip is an obvious one, and it's to keep an eye on your pup or kitty when they are outside. This especially goes for when you are somewhere away from home and therefore potentially unfamiliar. For example, some areas outside of your yard might contain hazardous plants, such as certain type of lilies, ivy, peonies, and a variety of other potentially toxic greenery. And while some plants aren't truly toxic to cats and dogs, they are still dangerous, and just one example of this is cacti you might find outside. Another aspect of the outdoors to monitor around your furbaby is the wildlife. There might be potentially hazardous snakes, spiders, and even some frogs that can produce toxic substances. Yet another consideration to make is the food and other trash that might have been thrown outside. Some food might be left in certain areas to help feed wildlife, and other times there might be food carelessly littered outdoors. In both cases, it's important to try to keep your furbaby from eating food or any littered material found outside, as you can never be certain what it contains and what dangers it might pose. Also keep an eye out for hidden bodies of water, such as small ponds, as well as other dangers along the lines of broken glass or other debris. All in all, when your pup or kitty is outdoors, don't turn a blind eye. Rather, be aware of the surroundings for the health and safety of your furbaby.
Posted by The Menagerie Mom at 7:32 AM

That is a sweet poem, very creative! Thimble and Astrid, you are so precious in those bestie photos!

Awww, Thimble and Astrid look so sweet together!

Excellent poem and adorable drawing to go with it. Thimble and Astrid are cuties, glad they worked out a way to both enjoy the window. :)

Lovely poem, and i am glad Thimble loves to share.

I love your story poem today......I especially love the idea of a tiny mini-cat....how wonderful it would be to carry it around with me in my pocket! HAHA Truly this story is one of my favorites - thanks for playing poetry with us every week..........can't wait to see what you do with next week's image.