Sorry we're posting late yet again! Work has been some sort of nightmare lately. But, I'm off for the next four days, and so I plan on using a chunk of that spare time to get my own schedule back on track. I work best when I have a routine, and lately the chaos that is my workplace has really thrown off my own personal routine, so I'm ready to get back to it.

As always, our poetic host shared a photo prompt to help guide us. This week's prompt was this intriguing image here: 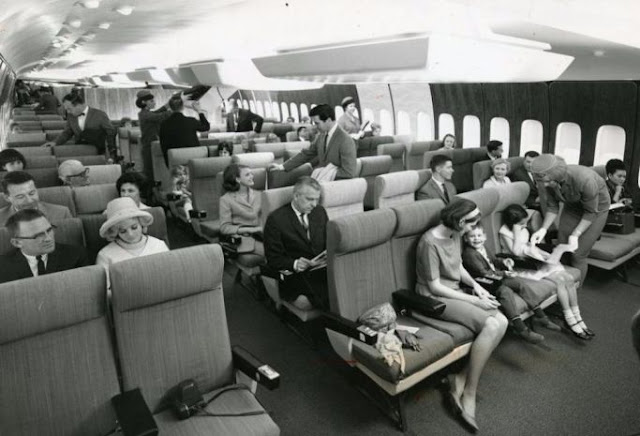 I most definitely took some liberties with this one. There is a flight in my rhyme, but nothing like the one seen above. If it's any hint at all, I tried to make this a Halloween poem as well. If you'd like to read it, here you go:

Tilly's house looked spotless as she sat a broom beside the door.
She lit the pumpkin lantern on the parlor table and picked her cat Alistair off the floor.
Then, just like that, her friends arrived and burst into her house.
As always, Tilly was the quietest of the bunch, quiet as a mouse

She was barely able to speak over the ladies now in her living room.
She told them, "You all can go. I have my own way to arrive at our destination in a zoom."
One of her friends asked, "You didn't get a ticket for the same airplane as us?"
"Why wouldn't you want to fly first class?" another said in a bit of a huff.
"It's simply not my style," Tilly said
"Trust me, I'll be fine," she added with a nod of her head

"When will you arrive?" one of her less boisterous friends asked.
"I promise you," Tilly said, "I'll arrive faster than fast.
In fact, I bet I'll arrive before the rest of you."
Alistair the cat purred and, as if in agreement, let out a mew.

One of Tilly's friend sighed and said, "Fine, have it your way.
But, don't be late. We want to arrive at this Halloween attraction without delay."
"I promise I won't be late," Tilly told them. "In fact, I'll be the opposite.
I wouldn't dare miss Halloween. I wouldn't even think of it."

"You've always been such a strange girl," one friend told her.
Tilly smiled as she shrugged with a nonchalant raise of her shoulders.
Then she said, "Now, off you all go, or you'll miss your flight and be left stranded.
I'll be there in a flash, and see you all once you've landed."

Finally, Tilly's friends departed and she took a deep breath,
Feeling more relaxed after their chaotic energy had left.
She opened the bags she had packed and placed on the floor.
She made sure she had placed inside her elixirs and books, and some more.

Standing back up and again picking up Alistair the cat,
Tilly gathered up her bags and headed to the door just like that.
"Goodness me, I almost forgot our ticket out of here."
Laughing, she grabbed the broom that stood near.
She also grabbed her hat that hung there,
Which stood tall and pointed and with a bit of flare.

Outside, she said a few words and waved her hands,
In reply, the broom floated in the air, no longer touching land.
Reaching into one of her bags, Tilly pulled out a book not even remotely light,
Saying, "This will make for a wonderfully spooky read on the flight."

"Goodness me, how could I forget?" Tilly blurted and turned to her pumpkin-filled yard.
"Just because I won't be here doesn't mean I can let down my Halloween guard."
With another wave of her a hand a few more words from her mouth,
Pumpkin lanterns were lit in the east, west, north, and south.
"Perfect," she said.
Admiring the sight, she nodded her head.

Book still in hand, Tilly then hopped onto the broom that floated in the air.
Onto her lap immediately settled her dear cat Alistair.
She petted the feline and set her eyes on the book's open page.
As the broom began going up, up, and away,
In the story she was already engaged.

Tilly petted the snoring Alistair and read the tome's terrifying tale the entire way.
Her trusty broom flew fast and never once did sway or stray.
As she predicted, she arrived at her destination long before her friends,
And so Tilly enjoyed that Halloween's peace and quiet, for before long it would come to an end. 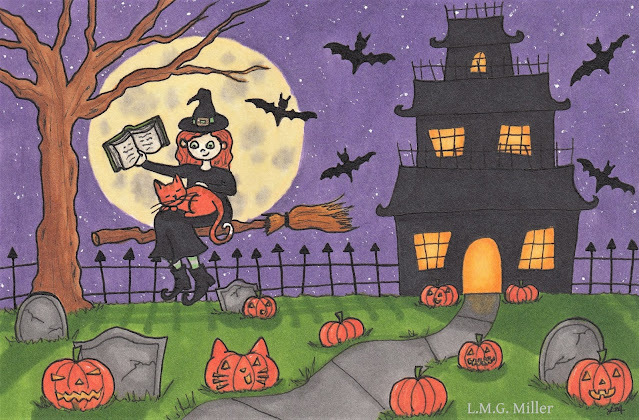 Now, how about some gratitude on this Thursday? After all, it's time for Brian's Thankful Thursday Blog Hop.

Thimble is always eager to share some gratitude. So, what is this tabby girl thankful for today? She's thankful that she found another someone to share some spooky reads with! 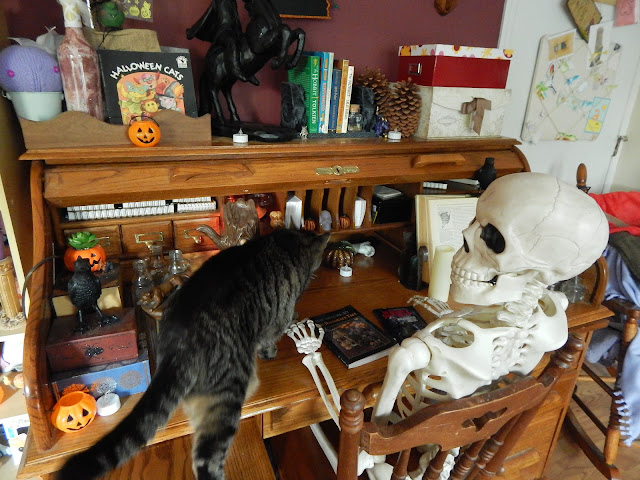 Don't mind the poor rocking chair off to the right that's drowning in blankets and pillows. I once put some warm and toasty laundry on that chair, and ever since that day Tonks insists that I keep blankets and pillows stacked on that chair for her to lay on. My cats run the house and I have no say in the matter.
Anyway. Doesn't Thimble's library patron look thrilled with the spooky tales she found for him to read? 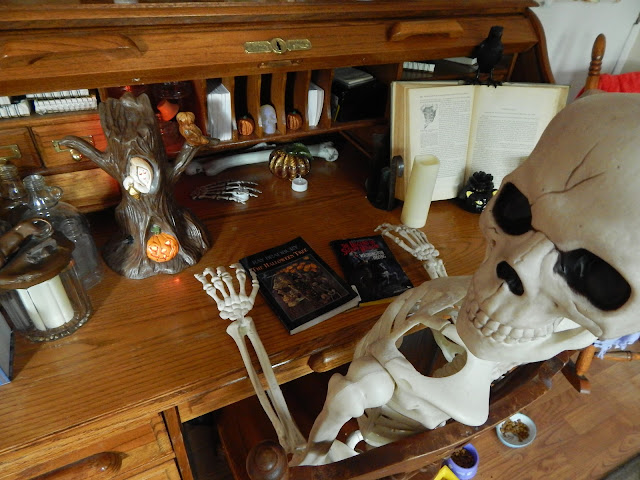 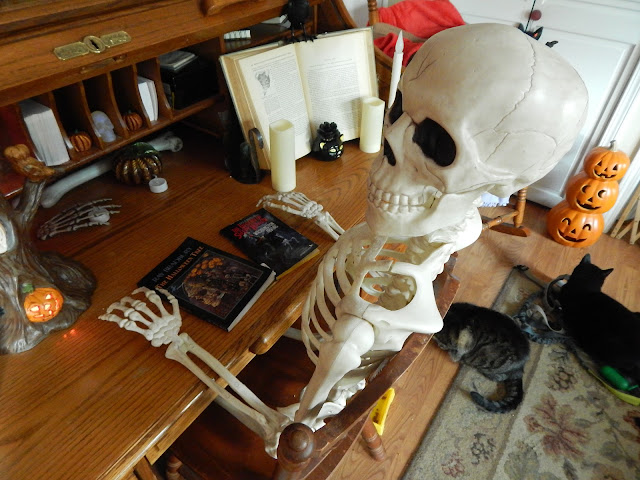 ***
Tip of the Day
If you think it might be fun and festive for your furbaby to get in the Halloween spirit with a chocolaty treat, consider getting them some goodies made with carob. Carob is a chocolate alternative, and it can give items such as candy and baked goods an appearance and even flavor that is similar to chocolate. What's more, carob does not contain the component found in real chocolate that is toxic to cats and dogs. There are carob pet treats on the market, and even items such as cookies for furbabies are sometimes made with carob. So, if you think your kitty or pup might enjoy some chocolaty treats of their own while you enjoy some candy on Halloween, then consider the safe and festive alternative that is carob.
Posted by The Menagerie Mom at 10:21 AM

No airport hassle; I love it!
Excellent story poem!

Thimble, your head!!! You're such a wonderful, dedicated little librarian. Love the poem and cozy doodle.

Ah, it's the only way to fly, at least to Tilly.

Excellent poem and drawing. Thimble is sweet to allow anyone into her library- even a skeleton. :) Nice tips too.

Perfect Halloween-ish twist for the poem this week! Love it!